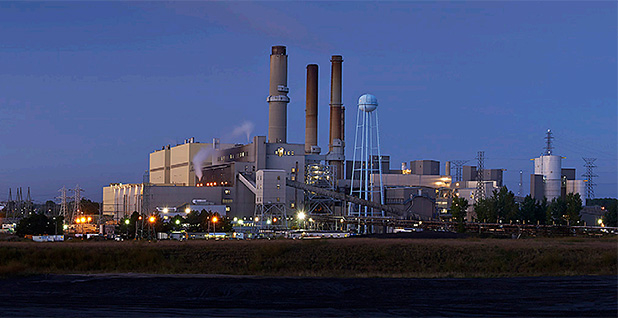 Consumers Energy will stop burning coal by 2025 under a 20-year energy plan announced yesterday. Two coal units at the Karn plant near Bay City, Mich., (pictured) would shut down in 2023, six years ahead of the utility's current plan. Credit Consumers Energy

Michigan’s second-biggest power provider has announced it will quit burning coal by the middle of the decade, accelerating retirement of two remaining plants by as many as 15 years.

Consumers Energy’s 20-year electricity plan — which requires approval from state energy regulators — would continue a dramatic transformation for the utility company, taking it from 33% coal to coal-free within a decade.

"This plan will make us one of the first utilities in the country to go coal-free and enhances our plan to be net-zero carbon emissions by 2040," CEO Garrick Rochow said in a video briefing with reporters yesterday.

Beyond the net-zero goal, the so-called integrated resource plan goes beyond the 50% carbon reduction target by 2030 that was laid out by President Biden. It also exceeds the emissions cuts required by the Paris climate agreement, executives said, as well as Democratic Michigan Gov. Gretchen Whitmer’s goal of a 28% reduction below 1990 levels in carbon by 2025.

But a key prong of Consumers Energy’s plan — the purchase of four natural gas plants at a cost of $1.3 billion to provide on-demand energy — prompts a thorny policy question looking forward: When is it realistic for utilities to exit fossil fuels entirely?

Consumers Energy executives said the answer depends on technology advances. For now, they and officials at other utilities agree that natural gas must be part of the nation’s energy mix.

The company plans to buy more than 2,000 megawatts of existing gas generation, including the 1,176-MW Covert combined-cycle plant and three gas peaking units from an affiliate.

Officials said the plan was born of an effort to balance cost, environmental benefits and profitability while maintaining a reliable grid. They pointed out the 20-year-old gas plants represent a sharp reduction in emissions compared to coal, and a better alternative for the climate and customers’ bills than building new plants.

"We’re not investing in a new, long-lived asset that might be there for multiple decades," said Brandon Hofmeister, a Consumers Energy senior vice president. "The current planning assumption is that these units would go offline at the end of their expected lives around 2040, in line with our net-zero carbon goal."

Hofmeister added that the company plans for a couple of gas plants to run beyond 2040 with carbon capture technology.

Margrethe Kearney, a Michigan-based attorney at the Environmental Law and Policy Center, said the planned addition of gas plants deserves close study to determine if it puts ratepayers at risk. That’s especially true for the affiliate purchases.

"It’s basically a gas for coal trade-off," Kearney said of the plan.

The timing of the accelerated coal closures was more aggressive than expected, though likely because the plants wouldn’t have been economic to continue running beyond the planned retirement dates, she said.

But exiting coal within a few years is significant, Kearney said. "Michigan is generally not the place where you expect to see that type of movement."

And buying existing gas plants is better than building new ones, he said. By contrast, Michigan’s largest electric utility, DTE Electric Co., is building a new 1,100-MW gas plant outside of Detroit.

But advocates question whether Consumers Energy could have gone cheaper and greener by looking to the market for its energy and capacity needs.

Specifically, Esposito called for using an all-source procurement, a competitive process in which utilities specify certain demand and reliability benchmarks over a given time period and the market dictates what technology and costs are needed to meet them.

An all-source procurement "gives a chance for cleaner and cheaper resources to win out in the end," Esposito said.

The purchase of gas plants may have been the best option for Consumers Energy in such a process, but the competitive approach would have provided regulators and customers added confidence that the chosen portfolio was the best solution, he said.

While coal retirements and gas plant purchases headlined the Consumers Energy plan, the utility also announced continued investment in renewable energy, specifically solar. The proposal builds on the previous plan with an additional 2,000 MW of nameplate solar by 2040, all of it competitively bid.

In all, the utility plans to add 8,000 MW of solar over the next two decades.

The company also plans to ramp up investments in energy efficiency and demand response to help shave energy use and peak demand, especially as transportation electrification takes hold.

Overall, officials said the plan will save customers $650 million compared with the current 20-year plan and reduce carbon emissions by 630 million tons, the equivalent of taking 12.4 million cars off the road.

Like other utilities, Consumers Energy said it’s not yet clear how the utility goes from 70% to 80% carbon-free to net zero in two decades without longer-duration battery storage, advanced small nuclear, green hydrogen or carbon capture.

"To get all the way to net zero by 2040, we are going to need some new technologies in order to ensure that reliable around-the-clock power," Hofmeister said. "Today, the best way to do [ensure reliability] is through the use of dispatchable and clean-burning natural gas plants."