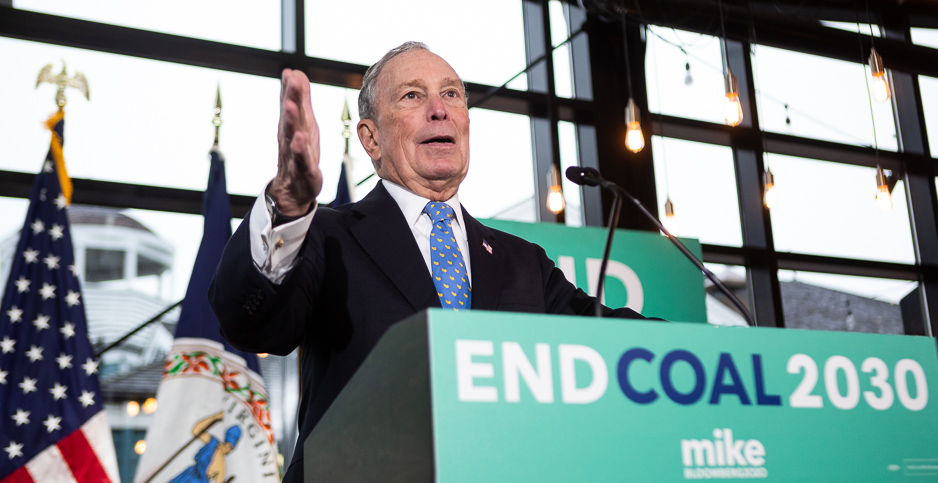 ALEXANDRIA, Va. — Presidential hopeful Michael Bloomberg promised today to phase out coal-fired power plants in the United States entirely by 2030 and to cut the country’s greenhouse gas emissions in half in a decade.

The pledge is part of the billionaire media mogul’s plan to clean up the electricity sector if elected, the second major climate change-related plank he has unveiled this week in a campaign that launched just last month.

Bloomberg, the former mayor of New York City, is polling in the single digits but is refusing to take donations for his self-funded campaign. He rolled out the proposal on the waterfront here, blocks from the closed Potomac River Generating Station and across from Washington, D.C.

Before it closed in 2012, the coal-fired power plant was the backdrop for his 2011 announcement of a $50 million contribution to the Sierra Club’s Beyond Coal campaign, his first big foray into his big-money drive to eliminate fossil fuel use.

Bloomberg boasted that 299 of the nation’s 515 coal plants in operation at the time of the 2011 announcement have since closed. He went to the plant after his speech today for a photo-op that even he grumbled was "one of the dumbest things we’ve ever done."

Bloomberg, a Democrat, also promised to crack down on newly built natural gas power plants, end fossil fuel subsidies and end new fossil fuel extraction leases on federal land. Taken together, he said the actions would reduce the United States’ economywide greenhouse gas emissions by half in a decade and cut the electricity sector’s emissions 80% by 2028.

"We’ll replace all U.S. coal plants with clean energy, and we’ll also replace existing gas plants and stop the construction of new gas plants," he said to a small crowd of climate activists and journalists.

"It’s a critical step to stopping the worst effects of climate change, because gas is really a very big problem, bigger than coal," he said.

But the plan is less ambitious in some key areas than those pushed by leading presidential contenders such as Vermont Sen. Bernie Sanders, Massachusetts Sen. Elizabeth Warren and even former Vice President Joe Biden.

Bloomberg does not set a deadline for the nation to reach net-zero emissions or even for a 100% clean electric grid, only that it would happen "shortly" after his zero-coal goal. He also did not endorse a ban on fracking — calling that fight "probably a lost cause."

Instead, he said what makes his plan superior to those of his rivals is its focus on short-term goals that could be achieved relatively quickly, not far in the future.

"We’ve got to start someplace," he said. "And my experience in business and in 12 years at City Hall running the most progressive city in the country was if you set big, long-term goals, nothing happens. If you set small, achievable goals, you can do them one after another. And it’s just amazing, when you stop down the road and you look back and see the compounding effect of doing a bunch of small things."

He was also critical of the Green New Deal.

He said it is "great" that its proponents are "thinking about new things, big things, but what we need is a lot of things right now that you can implement, and they tend to be not all that expensive."

Although Bloomberg didn’t set a timeline for ending the use of gas, he said it has to happen eventually. That’s a shift from earlier days in his anti-coal campaign, when he embraced gas because it was shutting down coal plants.

Instead, Bloomberg said he would target natural gas leaks in the short term, which advocates are increasingly pointing to as a climate change problem, because methane is a potent greenhouse gas.

"We’ve got to get away from natural gas as well and go to all renewables," he said, but "what we can do today is stop leaks."

Bloomberg was joined at the event by the Rev. Lennox Yearwood Jr., an outspoken environmental justice advocate and president of the Hip Hop Caucus, though Yearwood didn’t formally give an endorsement.

The League of Conservation Voters, which has not endorsed a presidential candidate, applauded Bloomberg’s plan.

"We commend Mayor Bloomberg for this ambitious plan that builds on his longtime leadership and bold vision for addressing the climate crisis," Tiernan Sittenfeld, the group’s senior vice president for government affairs, said in a statement.

"The next president must make addressing the climate crisis a very top priority, and we look forward to hearing more from Mayor Bloomberg and all candidates about their plans for day one and throughout their administration," Sittenfeld said.

The electricity plan follows Bloomberg’s rollout earlier this week of a platform for reentering the Paris climate agreement on his first day in office — in line with nearly all of his Democratic competitors — and to use numerous international venues to try to fight climate change worldwide (Greenwire, Dec. 10).