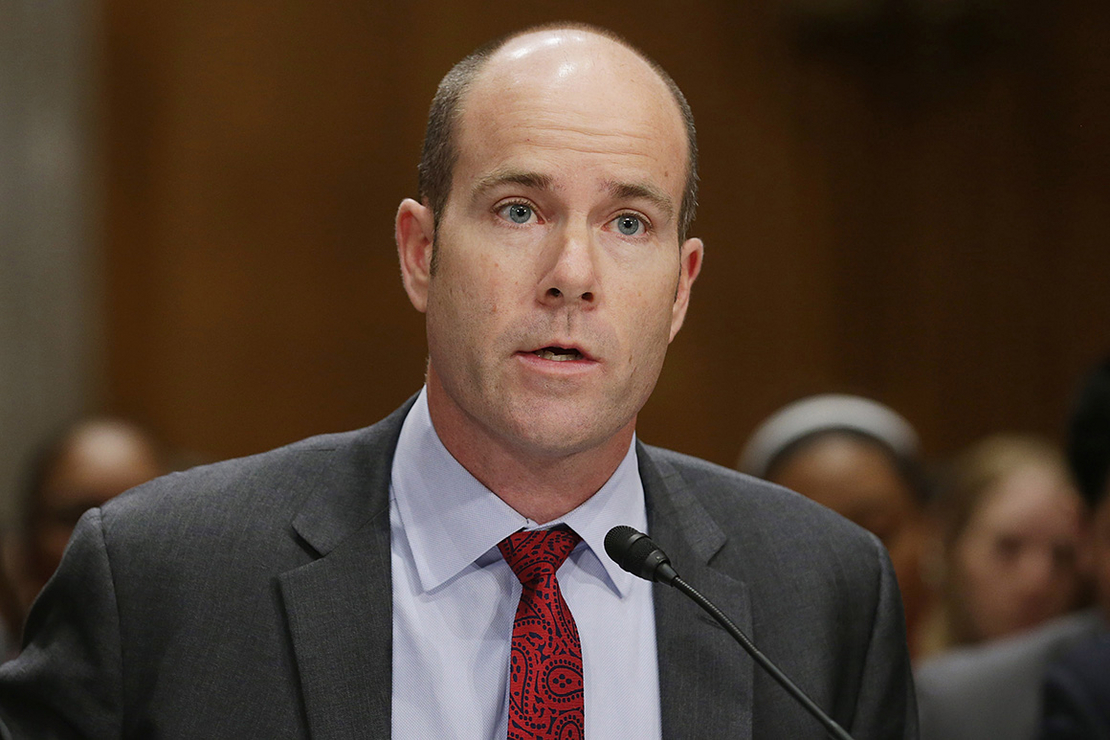 Michael Brune testifies to a Senate committee in 2014 about the Keystone XL pipeline. Chip Somodevilla/Getty Images

Then last year, as he was preparing to leave the environmental group after a decade at the helm, he started noticing a troubling trend: Some coal and gas plants were being revived or repurposed to power cryptocurrency mining.

Now Brune has a new battle: to clean up bitcoin — the world’s dirtiest cryptocurrency.

“This is increasing carbon pollution at a time when we need to be racing to decarbonize the entire economy,” Brune said in an interview with E&E News about the campaign launching today. “It’s bonkers that this is actually happening.”

The $5 million effort to change the code underlying bitcoin is a collaboration between the Environmental Working Group, Greenpeace USA and local environmental groups concerned about the impacts of bitcoin mining, an energy-intensive process in which powerful computers race to solve complex puzzles in hopes of winning a new bitcoin. The process now consumes more energy annually than the country of Norway, according to the University of Cambridge.

The campaign’s initial funding is from the foundation of Chris Larsen, co-founder of Ripple Lab Inc., a privately held crypto company. Federal regulators have accused Larsen and Ripple of raising over $1.3 billion in unregistered securities offerings via Ripple’s XRP cryptocurrency.

EWG, Greenpeace and the other environmental groups plan to use advertising and other advocacy efforts to pressure high-profile bitcoin backers like Jack Dorsey, the co-founder of Twitter, and Elon Musk, the CEO of Tesla Inc., to support a code change that would lead to less energy use. The effort, which Brune is facilitating, will also explore legal and regulatory efforts.

The goal of Brune and his collaborators is to switch bitcoin from a proof-of-work system, in which transactions are verified via computers competing to answer increasingly harder math problems, to one in which investors are randomly selected to do the bitcoin-generating work of verification. It’s a less energy-intensive process known as proof of stake.

The campaign comes as the Biden administration is reviewing its cryptocurrency policies and considering the launch of a digital dollar. That assessment includes the climate risks posed by crypto (Climatewire, March 10).

The environmental coalition is confident it can reform the decentralized bitcoin system, in part because it’s happened before. In 2017, major bitcoin developers agreed to changes that allowed for faster payment processes to be integrated into the system.

But the overhaul they’re proposing to the core security mechanism of the network is much more significant than previous tweaks, which could make for a protracted campaign.

Brune says the coalition is ready for the fight.

“We’ll raise enough money from climate donors and others who care about this issue to work on this for as long as it takes,” he said from his home in the Bay Area, the nation’s unofficial crypto capital. “We’re preparing for a campaign that maybe could take months. But we’re also prepared for something that could take several years.”

A win for environmentalists could also bolster Ripple and its founder, Larsen, according to cryptocurrency experts.

“XRP’s value is highly correlated with bitcoin,” said Harvard Business School Professor David Yoffie, who wrote a 2019 case study on Ripple. “If Ripple can help reduce the energy intensity of bitcoin, then XRP is likely to benefit.”

One complication: The U.S. Securities and Exchange Commission’s 2020 lawsuit against Larsen, Ripple CEO Brad Garlinghouse and the company remains unresolved. At issue is whether XRP, a cryptocurrency first issued by Ripple in 2013, is a tightly regulated security or if it’s an easier-to-trade commodity like bitcoin, which is released via a decentralized network of computers.

With regulatory questions about XRP looming, Ripple in 2018 pledged $50 million to fund cryptocurrency research efforts at the University of California, Berkeley; Cornell University; and other top colleges.

“Ripple has been engaged in a fairly aggressive PR campaign for several years now designed to boost its image, buy goodwill and reduce the regulatory scrutiny they’re under,” said Lee Reiners, the executive director of the Global Financial Markets Center at Duke University School of Law. “Funding this latest initiative is part and parcel of their broader PR strategy.”

Several cryptocurrency experts who spoke with E&E News noted that Larsen, who is now Ripple’s executive chairman, has a long history of raising concerns about bitcoin’s energy use.

“The founders of Ripple and developers of the XRP Ledger thought about the environmental side effects of proof-of-work back in 2011,” Yuliya Guseva, a professor with Rutgers Law School, said in an email. “These seem to be very important concerns that date back to the original idea for the technology behind XRP.”