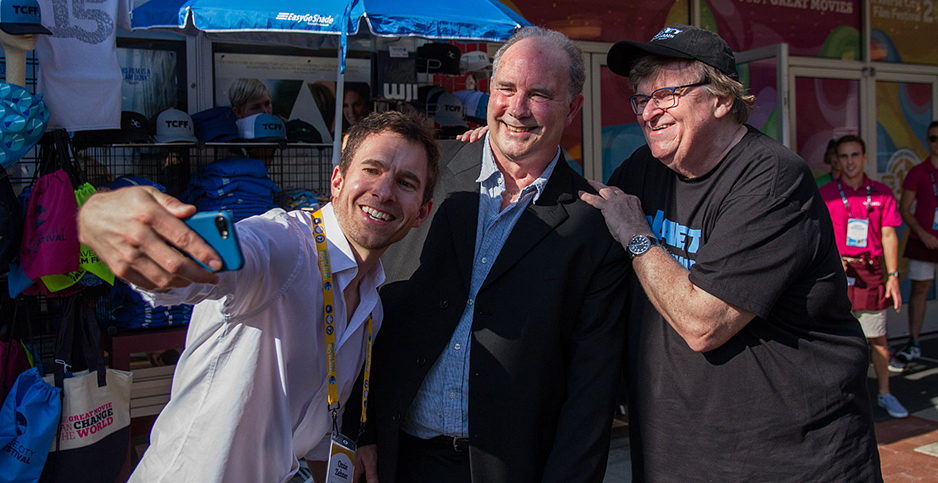 When filmmakers Michael Moore and Jeff Gibbs set out to make a documentary about renewable energy, they said their goal was simple: to tell the truth.

"If we don’t face the truth we’re doomed. My camera will expose whatever and whoever needs to be exposed," Gibbs later wrote.

But its critics say "Planet of the Humans," which has racked up more than 6.2 million views since its release on YouTube last month, has a loose relationship with facts.

"The film presents a distorted and outdated depiction of the renewable energy industry in an effort to malign renewable energy, thus ironically promoting the agenda of the fossil fuel industry," Michael Mann, a climate scientist at Pennsylvania State University, said in an email to E&E News.

Mann is among a host of climate scientists and environmentalists who have blasted the documentary, saying it peddles inaccuracies about the costs and climate impact of various clean energy sources, including wind, solar and biomass.

But some conservatives have cheered the film as a refreshing takedown of renewable energy and the environmental movement. Many of them reject the overwhelming scientific consensus that human activity is heating the planet.

"My friends and I have been saying these things for years about renewable energy. And then Michael Moore comes along and just devastates this whole renewable energy myth," said Steve Milloy, a skeptic of mainstream climate science who runs the blog JunkScience.com.

One thing is clear: Since "Planet of the Humans" hit the internet just before Earth Day, it has attracted a good deal of controversy — and sparked a broader discussion about climate misinformation.

One of the most common criticisms of "Planet of the Humans" is that it relies on outdated and misleading data on clean energy.

For instance, near the beginning of the film, director Gibbs attends the launch of the Chevrolet Volt, a plug-in hybrid electric vehicle, at a General Motors Co. facility in Michigan.

Gibbs presses an official from a local utility on where the electricity powering the vehicle came from. The official responds: "It would be charging off our grid, which is about 95% coal."

There’s a problem with that assertion: It’s more than a decade old.

GM launched the Volt in 2010. Since then, natural gas and nuclear power have surpassed coal as the leading sources of electricity generation in Michigan, according to the U.S. Energy Information Administration.

In fact, 94% of Americans live in an area where driving an electric vehicle produces less greenhouse gas emissions than driving a gasoline-powered car, according to an analysis by the Union of Concerned Scientists.

David Reichmuth, a senior vehicles engineer at UCS and the author of the analysis, declined to comment for this story because he hadn’t seen the documentary. But Leah Stokes, a professor at the University of California, Santa Barbara, who studies climate policy, slammed the movie’s portrayal of EVs.

"The electric vehicle stuff was really out of date," Stokes said. "Two years ago, if you were trying to decide whether to buy an internal-combustion engine vehicle or an electric vehicle, an EV would have been cleaner because the electricity mix would’ve been cleaner. That’s just true. And so why was it not portrayed like that?"

Later in the documentary, author and producer Ozzie Zehner visits the much-hyped Ivanpah thermal solar plant in the Nevada desert. He points out that the plant requires natural gas to start up, meaning it’s not technically zero-emission.

"One of the most dangerous things right now is the illusion that alternative technologies like solar and wind are somehow different from fossil fuels," Zehner says. "You use more fossil fuels to do this than you’re getting benefit from it. You would have been better off just burning fossil fuels in the first place, instead of playing pretend."

But climate scientists say Zehner is the one "playing pretend."

They say his assertion ignores the fact that renewables have far less life-cycle emissions than fossil fuels, citing findings from the National Renewable Energy Laboratory.

"For every [kilowatt-hour] of electricity that they generate, renewables are responsible for around 20 times less greenhouse gas emissions than coal and more than 10 times less than natural gas. These calculations account for all the lifecycle emissions including mining, construction, decommissioning, etc. for all the different types of energy," Zeke Hausfather, director of climate and energy at the Breakthrough Institute, said in an email.

The filmmakers didn’t respond to a request for comment that was submitted through the film’s website. A secretary for Moore’s agent at a Hollywood entertainment agency hung up on an E&E News reporter.

But in a livestreamed discussion on YouTube last night, Extinction Rebellion co-founder Clare Farrell asked the filmmakers why they relied on "old solar sites and things like that when there was more up-to-date green, renewable energy sources that you could’ve studied for some information to present."

Zehner responded: "That’s actually an interesting criticism. It’s not something that we really foresaw. The film takes place over more than a decade. And it’s a historical look. And so much of what happens in the film happens in history, and then it comes up to the present day."

‘I’m not beholden to large companies’

Another frequent criticism of the documentary centers on journalistic ethics.

In its code of ethics, the Society of Professional Journalists encourages reporters to "diligently seek subjects of news coverage to allow them to respond to criticism or allegations of wrongdoing."

But the filmmakers failed to contact two prominent targets of their criticism, according to the targets themselves.

First, the filmmakers relentlessly criticize the Sierra Club’s Beyond Coal campaign, which is aimed at retiring coal-fired power plants around the country. They even suggest the campaign is largely responsible for the construction of new natural gas plants nationwide, ignoring the group’s recent statements opposing new fracked gas facilities.

They never reached out to the Sierra Club for comment.

"This YouTube video is riddled with outright falsehoods, inaccuracies and distortions about the Sierra Club, clean energy and climate activism," the group said in a statement. "Disappointingly, the makers of the video chose not to contact the national Sierra Club, or even do a simple search for our recent statements or opinion editorials on basic policy matters."

In addition, the filmmakers repeatedly accuse Bill McKibben, the founder of 350.org, of having a "profit motive" and taking money from large corporations to promote renewables.

In an email, McKibben said the filmmakers never contacted him, and shot back: "I’m not beholden to large companies, and indeed have never taken a penny from any of them or any environmental group."

McKibben added that he has received death threats since the film came out, but "that’s not actually anything new."

In the livestreamed discussion last night, Moore sought to temper the film’s harsh appraisal of some prominent environmentalists and green groups, including former Vice President Al Gore and the Sierra Club.

"We’re asking questions not of [President] Trump, not of the right wing, not of all the corporate bastards we’re used to fighting, but … of friends," he said. "People on our side of the political fence. People that we admire. People that we like. People that we’ve worked with. People that have done so much good work."

He added: "The Sierra Club, for instance. My God, it was started by John Muir, who’s done so many good things over the last century, century and a half. So we don’t have a bone to pick with anybody on a personal level."

View from the inside

So what do the people featured in the film think about it?

E&E News spoke with two people who were featured in the film as experts. One offered praise. The other pointed out an error.

Josh Schlossberg, a former campaigner with the nonprofit group Energy Justice Network, is shown trespassing onto a biomass facility in Vermont and discussing the perceived drawbacks of biomass energy.

Reached by phone, Schlossberg said he thought the movie was "well done." He rejected allegations that the movie helped promote fossil fuels and focused too much on biomass energy, even though it accounts for less than 2% of U.S. electricity generation. "It’s a pretty anti-fossil fuels film. It just takes that as implicit," he said.

Richard York, a professor of sociology and environmental studies at the University of Oregon, is filmed discussing his research on renewables. York explains that according to his research, when a new solar or wind farm comes online, it barely displaces existing fossil fuel generation.

In a phone interview, however, York pointed out that the paper in question is from 2012, and its most recent data point is from 2009.

"There’s legitimate reason to think the data may have changed in the last decade," he said. "In the period I analyzed, nations have not made serious efforts to suppress fossil fuel production. But over the past decade, there have been more serious efforts."

York is also featured discussing the idea that population control — rather than renewables — could help combat climate change. Critics say it’s a problematic idea that has been wielded by proponents of eugenics and eco-fascism.

Asked about this criticism, York acknowledged that "there have certainly been ugly efforts and framings that have occurred on the population issue."

‘Proper responses to this film’

To be sure, "Planet of the Humans" has its supporters. Critics of mainstream climate science have cheered the film and its takedown of renewables.

Myron Ebell, the director of the Center for Energy and Environment at the Competitive Enterprise Institute, wrote in a recent blog post that the documentary "contains a stunning evisceration of so-called green energy and the people profiting from it."

The Heartland Institute, another think tank that rejects mainstream climate science, devoted an hourlong podcast episode to the movie.

The Heartland Institute didn’t respond to multiple requests for comment. But Milloy, the editor of JunkScience.com, said he’s spoken with other climate skeptics, who he said are fighting calls for the movie to be taken down.

There have been several such calls. The most prominent one came from Josh Fox, the director of the 2010 documentary "Gasland," which tells the story of communities affected by hydraulic fracturing.

In a letter circulated on Twitter, Fox urged YouTube and other websites to retract the movie, which he called "a total outrage at a time when climate action and the leap to renewable energy is more important than ever."

Films for Action, an independent video library, initially responded to the letter by removing the documentary from its website. But the film returned the next day.

Reached by phone in Kansas, Films for Action Director Tim Hjersted said it was a difficult decision to put the film back online.

"I think there’s plenty of misinformation in there," he said. "But I felt that the discussion was valuable, and that critical engagement, critique and debate were all the proper responses to this film."

Clarification: An earlier version of this story was unclear on how long "Planet of the Humans" was removed from Films for Action.