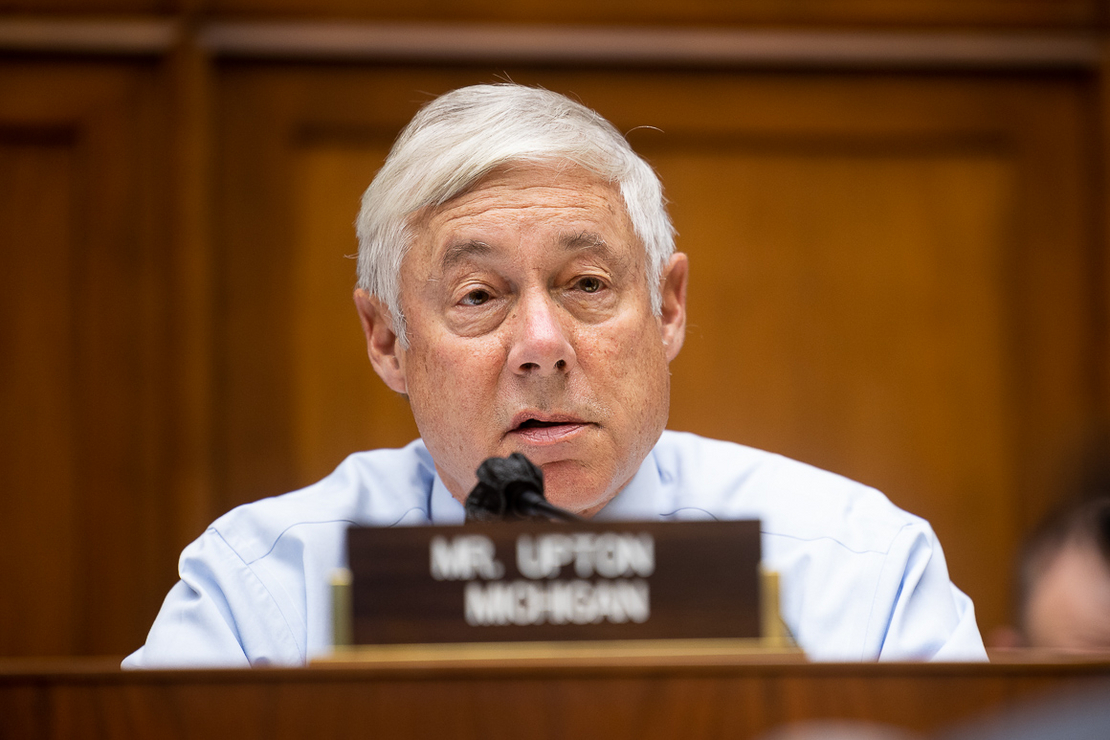 Rep. Fred Upton (R-Mich.), a senior member of the Energy and Commerce Committee, will not run for reelection. Francis Chung/E&E News

Michigan Rep. Fred Upton, the former chair of the House Energy and Commerce Committee, will retire at the end of the session, after 36 years in the House.

Upton has carved out a centrist, pro-business record in recent years, including joining calls to expand renewable energy production and better protect the Great Lakes, and has enjoyed friendly relationships with Democrats, including the late Michigan Rep. John Dingell and President Joe Biden.

Upton has also attracted ire from some conservatives, along with derision from former President Donald Trump and his supporters. Upton voted last year to impeach Trump over his role in the Jan. 6, 2021, attack on the Capitol.

Upton also voted in favor of creating a bipartisan commission to investigate the Capitol riot and for the Infrastructure Investment and Jobs Act, also known as the Bipartisan Infrastructure Law.

That all spurred Trump to endorse Rep. Bill Huizenga against Upton in next month’s Republican primary. Redistricting, and Michigan’s loss of a House seat, put the two into the same district (E&E Daily, March 15).

Upton announced his retirement in an emotional speech this morning on the House floor.

“I’ve done the zillions of airlines miles back and forth; I’ve signed ‘Fred’ to over a million letters, cast more votes than anyone in this chamber while here and, by most accounts, succeeded in making a difference, accomplishing what I’ve set out to do, with more unfinished work still to come,” he said.

Upton, 68, recounted his accomplishments as Energy and Commerce chairman and in other roles.

“My driving mission has been jobs and the economy, whether it was working on the North American energy independence plan, pursuing renewable resources — yes, dealing with climate change, changing the tax laws so that no longer do we have the highest corporate tax rates in the world, which drove so many of our job creators someplace other than America,” he said.

“Pipeline safety, protecting the Great Lakes, our drinking water, has also been my focus. Every family in America deserves clean water,” he continued.

Upton chaired the Energy and Commerce Committee from 2011 to 2017. Since then, he’s been the top Republican on the Energy Subcommittee.

He was a leading figure in the successful 2015 push to repeal the ban on crude oil exports, one of the most consequential pro-fossil-fuel policies in recent years.

“It is well past time that our laws rooted in energy scarcity caught up to our newfound 21st-century reality,” he said at the time (E&E Daily, Dec. 2, 2015).

Upton was also a leader in the recovery efforts for the Flint, Mich., drinking water lead contamination crisis, along with policies to clean up drinking water elsewhere and prevent a similar crises.

In a 2015 meeting in which the committee passed resolutions to overturn the Clean Power Plan and a regulation that sought to limit greenhouse gas emissions from newly built power plants, Upton said the legislation was “ultimately about protecting hardworking people from higher electricity prices, threats to grid reliability and EPA’s economywide energy tax” (E&E News PM, Nov. 3, 2015).

Upton was first elected to the House in a southwestern Michigan district in 1986, after beating then-Rep. Mark Siljander (R) in a primary. He’s faced a number of tough election challenges from both Democrats and Republicans.

Apart from energy matters, he’s sponsored a number of successful major health policies, including the 21st Century Cures Act, which sought to boost pharmaceutical and biomedical development through agencies including the National Institutes of Health.

Upton is the fourth GOP supporter of Trump’s 2021 impeachment to resign from the House, out of 10 total Republican votes. He is the 16th House Republican to announce his departure since this session of Congress began last year.