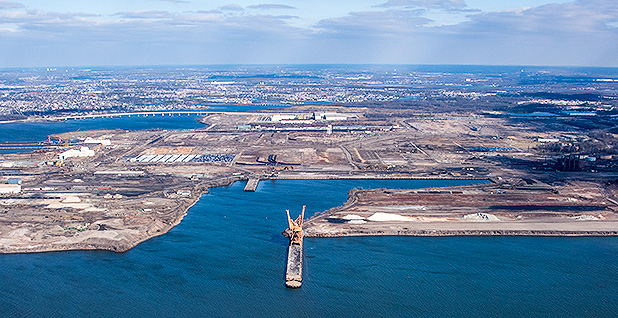 The Port of Baltimore's Atlantic Tradepoint, formerly known as Sparrows Point, was once home to Bethlehem Steel. Now, its owners want to capitalize on the offshore wind business. Photo courtesy of Tradepoint Atlantic.

Maryland’s new offshore wind policy is more than a play for windmills. It’s also a play for manufacturing jobs.

In approving 368 megawatts of offshore wind power last week, Maryland regulators said they want the state to be the industry’s "first mover" and the supplier for the East Coast (Climatewire, May 12). The policy is the first in the United States to explicitly marry an offshore wind goal to an economic one. And it’s a purposeful stab at becoming the American beachhead for an industry that’s already mature in Europe.

The Maryland Public Service Commission considered a smaller project but decided that the larger one was justified by its forecasted economic benefits: almost 9,700 jobs and $1.8 billion of in-state spending over 20 years.

"It is not lost on us that this Order effectuates a premium investment by our ratepayers," the PSC said in its May 11 order. "We have, to the best of our abilities, attempted to seize on the realization of both lofty economic and environmental goals established by the State."

Maryland, Massachusetts, New York and New Jersey are hoping to build wind turbines off their coasts. But so far there is no port to supply them, so the parts have to be imported from Europe and assembled at sea.

"We’re extremely excited about it," said David Roncinske, a representative with Wharf, Dock Builders, Pile Drivers, and Divers Local Union 179. "The nature of the project demands labor, and so their promises — they don’t have a choice. If they want to install this, if they’re going to finish their project, they’re going to need people to do it, lots of them."

In Maryland, the policy centers on an instrument called an offshore renewable energy credit, or OREC. These ORECs are worth about $130 per megawatt-hour generated, and they’re awarded for 20 years once the windmills start generating power.

That represents a cash stream that the developers, U.S. Wind Inc. and Deepwater Wind Holdings LLC, say will enable them to raise the cash to build the projects. It’s a premium price for power — more than double the levelized cost of generation by a new natural gas plant, according to the Energy Information Administration.

And it will raise power bills. The PSC said the average Marylander would see bills rise by a maximum of $1.40 a month. Commercial and industrial customers would see a maximum hike of 1.4 percent.

But Maryland regulators sought new renewable energy resources that could help meet the state’s renewable energy goals. Offshore wind offered one way to get renewable electrons from in-state instead of importing them, the PSC said.

But they were also constrained by a 2013 state law that said they could not approve projects unless they delivered "net benefits" to the state’s economy, environment and health.

The PSC found that they did. A major reason was that the PSC required U.S. Wind and Deepwater to build part of their supply chains in Maryland. The companies are required to jointly spend at least $76 million on steel manufacturing in Maryland. They’re required to use ports in Baltimore and Ocean City.

They’re also required to pump $40 million into Tradepoint Atlantic, a vast shipyard east of Baltimore that was once home to Bethlehem Steel.

Today the 3,100-acre parcel is home to a FedEx Corp. facility, an Under Armour Inc. facility, a rusted steel plant and a lot of empty space.

There is a hardened dock where, it’s imagined, cranes could pick up the towers, blades and nacelles for the turbines and load them onto ships. None of those are made in the United States today. European companies say they will be, if the United States commits to larger scale.

And both U.S. Wind and Deepwater Wind have to confirm that they’re taking the OREC incentive. They have until May 25.

"If we establish a good program here, it could be a base to serve the rest of the Eastern Seaboard," Tomarchio said. "I think we can handle it all, but I think we’ll have to see what the market looks like."