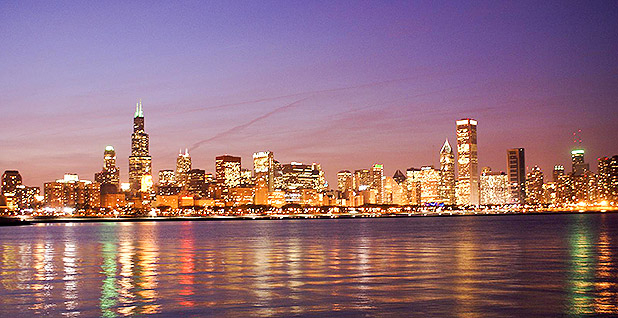 Chicago's skyline is shown. Electric rates in Illinois have fallen amid a competitive market, but other Midwest states aren't keen to follow its lead. Photo by Nimesh Madhavan, courtesy of Flickr.

It was just a decade ago that Illinois had the dubious distinction of having the highest electric rates in the Midwest.

Homeowners and small businesses saw bills soar after rate caps that were put in place during the transition to competitive electric markets disappeared. Even factories and large energy consumers paid the highest rates in the region.

Now, Illinois’ electric rates are in the middle of the pack in the Midwest and well below those of northern neighbors like Michigan and Wisconsin, according to data from the U.S. Energy Information Administration. And industrial rates are the third-lowest, behind only Iowa and Missouri. Whatever gap remains is narrowing.

It’s a trend that hasn’t gone unnoticed by industrial energy users in places like Michigan, Indiana and Wisconsin — Rust Belt states where manufacturing remains a vital part of local economies. Even in Nebraska, the only state served entirely by a public power system, a state legislator has introduced a bill on file to bring electric competition.

Despite flashes of interest, it’s unlikely that other Midwest states will follow Illinois lead. Vertically integrated utilities want no part of playing in competitive power markets in an era of low prices and declining demand. Even the term "electric deregulation" still conjures images of Enron, the Houston-based energy trader that lobbied for electric restructuring in states across the country before the company imploded in 2001.

Consider Indiana. A decade ago, the state’s average industrial rate, 4.89 a kilowatt-hour, was more than a penny less than its neighbors on either side in Illinois and Ohio. Last year, Indiana’s industrial rate topped 7 cents for the first time — ahead of Illinois’ 6.37 cents and Ohio’s 6.78 cents.

The Indiana Industrial Energy Consumers (Indiec) — a group of about two dozen of Indiana’s largest energy users, including auto manufacturers, steel producers and oil refiners — began to advocate for competitive electric markets beginning in the early 1990s when many other states were doing the same.

Two decades later, the Indiana industrial group continues to be a believer in competitive electric markets and published a white paper on the topic in 2013. But efforts to spark a serious discussion in the Legislature "never really got anywhere" given strong opposition by investor-owned utilities.

"Indiec has been very concerned and very vocal about the rising cost of energy in Indiana," said Bette Dodd, an Indianapolis attorney who serves as the group’s director. But, she said, "it’s hard to make even small in-roads with the hold that the utilities have in the Legislature."

Dodd said the group has instead shifted its focus to working within the rate-regulated market construct to address rising energy prices.

"We don’t believe it’s the right direction for the state to move," Maassel said.

While many industries from airlines to telecommunications have benefited from deregulation and price competition, the electricity industry has characteristics that make it unique, he said.

There remain questions in some competitive states whether necessary price signals are being sent to spur investment in new generation to replace older or uneconomic power plants, he said.

Meanwhile, there are checks and balances within the current market structure, whether that’s falling prices for rooftop solar panels or the Indiana Utility Regulatory Commission, which sets retail electric rates in the state based on a utility’s costs.

While Illinois electric rates as a whole have remained relatively flat over the past decade as prices in neighboring states have continued to rise, it hasn’t eliminated the debate over market structure. It’s just been redirected.

There, it isn’t industrial consumers clamoring for change; it’s the generators. The General Assembly passed a bill in December that, among other things, will provide two Exelon Corp. nuclear plants with up to $235 million a year in subsidies to keep them running (Energywire, Dec. 2). The Chicago company had threatened to pull the plug on the reactors unless the legislation was passed.

Mark Pruitt, a Chicago area electricity industry consultant, wasn’t part of the debate. But he knows something about how the electricity markets function in Illinois. For almost four years, Pruitt was director of the Illinois Power Agency, the state office created to procure energy for big investor-owned utilities after they spun off their power plants into separate companies.

But Pruitt isn’t an ideologue when it comes to electricity markets. While retail competition in Illinois has "lifted the veil" on electricity pricing, enabling consumers to better see the components of prices — energy, capacity, transmission and distribution — that are embedded in retail rates, it’s not necessarily a better market, he said. It’s just different.

Illinois has clearly benefited from the shale gas revolution, he said. Natural gas is the electricity generation fuel that dictates the wholesale market price of electricity in the region, and relatively inexpensive gas, coupled with flat electricity demand and Illinois’ status as a net exporter of electricity, has worked to the benefit of consumers.

But, Pruitt noted, there are no guarantees that this will continue to be the case.

While Illinois energy users have benefited in recent years compared with neighbors served by monopoly utilities in rate-regulated states, that could change if natural gas prices rise enough or the state continues to see power plants shut down.

"Low prices are great for consumers," Pruitt said. "But they’re not so great for our friends on the generation side.

The largest owner of generation in southern Illinois, Dynegy Inc., continues to warn that without changes in the southern Illinois market, the state faces a "tsunami" in the form of power plant closures.

Since then, the company has closed several coal-fired units and says its remaining plants continue to face economic pressure because the current capacity market structure won’t support needed investment in generation.

The region’s grid operator, the Midcontinent Independent System Operator, has similar concerns. MISO spent a year and a half developing a 1,700-page proposal filed with the Federal Energy Regulatory Commission in November. FERC rejected it outright a month ago (Energywire, Feb. 6).

Nowhere in the Midwest has the debate over electric choice been as contentious as it has been in Michigan.

The state opened its retail electric market to competition in 2001. But for a variety of reasons, few consumers switched electricity suppliers. In 2008, participation in electric choice programs was capped at 10 percent in exchange for a commitment by utilities to deploy more renewable energy.

After two years of hearings and debate, a pair of energy bills passed in the final days of the last legislative session will maintain a 10 percent cap (Energywire, Dec. 16, 2016). The outcome was largely a stalemate between business interests and schools that sought to expand competition to help bring down prices and utilities that sought to end it.

But the new chairman of the Michigan House Energy Committee, Rep. Gary Glenn (R), who had previously proposed legislation to expand electric choice, made it known immediately that he would continue the push.

"It simply defies reason that some of our school districts are able to save hundreds of thousands of dollars in their electricity costs, and the school district right next door does not have that same opportunity," Glenn said.

A Feb. 1 report by the Michigan Public Service Commission provides at least some support for electric choice advocates. The report confirmed that the state has the highest residential retail rates in the Midwest, at 15.25 cents per kWh in 2016. And only Wisconsin has higher commercial rates.

Technology in the driver’s seat

Teresa Ringenbach, the company’s senior manager of government and regulatory affairs for the Midwest, agrees that competition does yield better prices. But she said electric choice is about giving consumers more options and control over their bills.

In Illinois, for example, the company offers a dozen different rate plans ranging from nine to 24 months. There are 12-month plans that come with a free year’s Hulu subscription, plans that offer free electricity use from 7 p.m. to 11 p.m. and plans that include free weekends.

Recent experience in states like Indiana and Michigan illustrate that swaying state lawmakers on the benefits of electric competition is still a tough sell in states where politically powerful utilities don’t want it.

But whether it’s falling prices for rooftop solar or smart thermostats, it is technology instead of public policy that is ushering in a new era of choice.

"These things are showing up whether utilities want them or not," Ringenbach said.