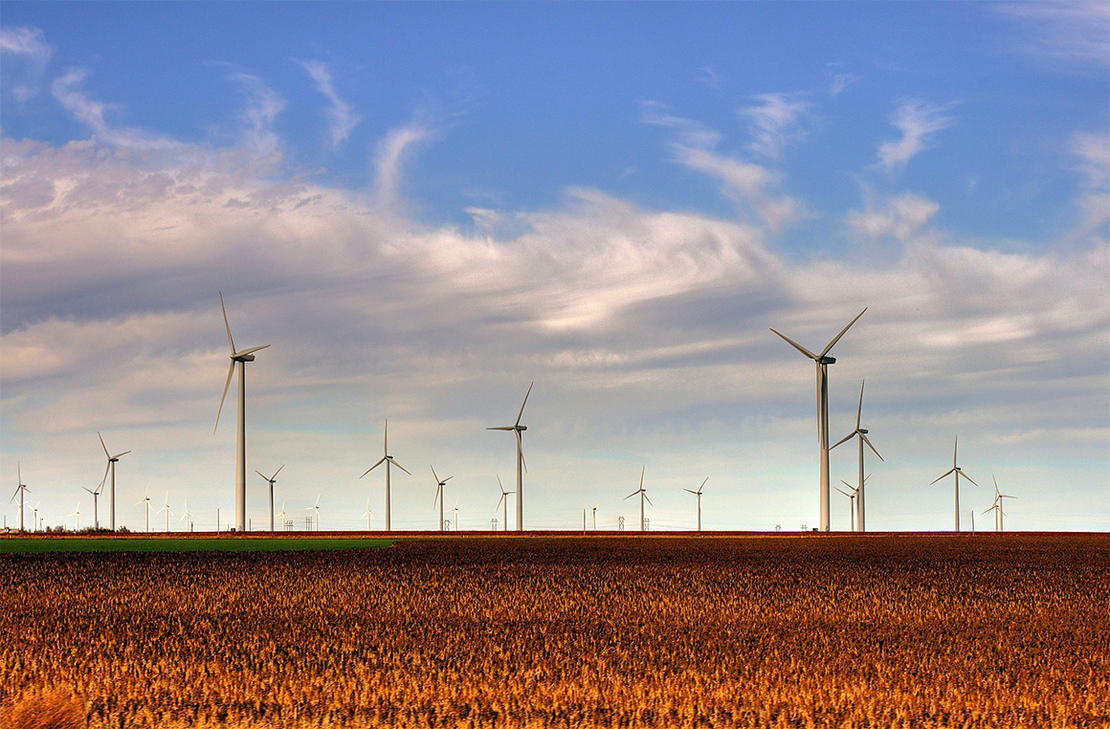 A wind farm about 140 miles west of Topeka, Kan. Drenaline/Wikipedia

The developer of a planned high-voltage transmission line from Kansas to Indiana yesterday announced that the project is being expanded in response to strong demand for wind energy from customers in the region.

Chicago-based Invenergy LLC, which purchased the Grain Belt Express project in 2018 and took over its development, plans to increase the line’s capacity 25 percent to 5,000 megawatts and boost its midpoint delivery capacity at a Missouri converter station fivefold to 2,500 MW.

Invenergy also announced it would build the $7 billion project in two phases, enabling the company to accelerate construction of the initial phase from Kansas to the Missouri converter station.

The announced expansion comes a month after Missouri Gov. Mike Parson (R) signed legislation that exempted the Grain Belt Express project from eminent domain reforms enacted by the same legislation. Passage of H.B. 2005 ended years of acrimonious debate over the line (Energywire, May 12).

It also comes as states and utilities in the region are pushing grid operators to expand transmission access to enable new renewable energy projects to come online.

“This state-of-the-art transmission infrastructure project will save families and businesses billions of dollars in electric costs each year, protect our communities by improving reliability and power prosperity across the Midwest well into the future,” Shashank Sane, executive vice president and head of transmission at Invenergy, said in a statement.

The 780-mile Grain Belt Express line was initially proposed more than a decade ago to carry wind energy from southwest Kansas to Indiana, where it would plug into the PJM Interconnection LLC grid, the country’s largest electricity market.

The project is among the high-voltage lines being pursued in the Midwest to connect remote places with good wind and solar resources to cities where electric demand is greatest. The line is a so-called merchant line, meaning its costs wouldn’t be spread broadly across the region like most intrastate transmission lines. Instead, only utilities and other consumers that buy capacity on the line would pay.

Among those customers are more than three dozen small cities and towns across Missouri, which estimate they will save more than $12 million annually compared with coal plants that supply power under existing contracts.

Invenergy said yesterday that the savings across Missouri and Illinois will be exponentially greater.

The company said an analysis from PA Consulting Group shows that the expanded line will mean $7.5 billion of energy and capacity cost savings over 15 years for consumers in Missouri and Illinois, states that are part of regional power grids served by the project. Kansas will see an additional $1 billion of savings due to the interconnected nature of the grid, the report said.

In a joint statement, business groups — including Associated Industries of Missouri and the Illinois Manufacturers’ Association — applauded the expansion.

“Grain Belt Express’s additional commitment to deliver more power to Missouri could not have come at a better time for businesses in our region who are facing increased risk for outages and higher energy bills due to more demand and less energy production,” Ray McCarty, CEO of Associated Industries of Missouri, said in a statement.

Utility regulators in Missouri and Kansas have already approved construction of the line. An Invenergy spokesperson didn’t immediately respond to an email asking if the expansion plans required additional approvals.

Invenergy has yet to seek approval from the Illinois Commerce Commission, although the company earlier said it planned to file an application this summer.

Previous owner Clean Line Energy Partners had obtained approval on the line in Illinois years ago, but the decision was invalidated by a court.

A sweeping climate and energy law signed by Illinois Gov. J.B. Pritzker (D) last year includes provisions incentivizing development of high-voltage, direct current transmission infrastructure if applications for projects are submitted to the Illinois Commerce Commission by the end of 2023.