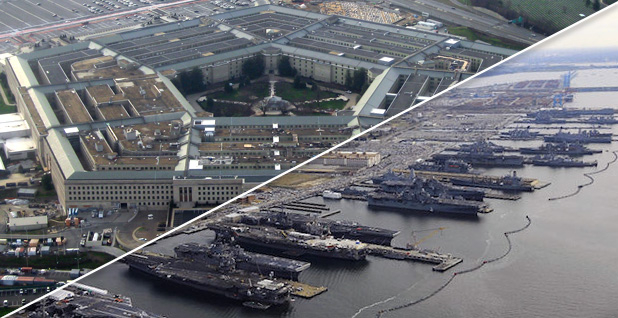 The Senate will debate defense policy amendments, possibly including the impact of sea-level rise on the Navy. NASA (ships); David Gleason/Wikipedia (Pentagon)

The annual defense bill will take center stage in the Senate this week, with several energy and environmental issues in tow, including the nation’s response to global warming.

The chamber will take a procedural vote on the National Defense Authorization Act tonight, and lawmakers expect to tackle roughly 30 amendments in the coming days.

Armed Services Chairman John McCain (R-Ariz.) told reporters Thursday that debate could bleed over into next week, though Senate leadership has said it aims to move the bill quickly and push on to other priorities.

For environmentalists in the defense community, this year’s NDAA is key. Many are hoping to see Congress formally endorse the Department of Defense’s efforts to mitigate climate change for the first time.

In the House, Rep. Jim Langevin (D-R.I.) introduced an amendment to that chamber’s bill in committee that would require DOD to produce a report on its most vulnerable installation.

In practice, the Pentagon has already begun the process of assessing its departmentwide climate risk, but Congress — particularly Republicans — has thus far been resistant to endorse that policy.

In July, however, a number of Republicans crossed the aisle to vote to keep Langevin’s amendment in the bill, a major legislative victory for the bipartisan Climate Solutions Caucus (E&E Daily, July 14).

Though the Senate version is different, Francesco Femia, co-president of the Center for Climate & Security, said he hoped to see the upper chamber make a similar endorsement.

And Tom Moyer, who works with the grass-roots group Citizens’ Climate Lobby, told E&E News that the amendment was already a big victory in the effort to get Republicans to invest in climate legislation (E&E Daily, Sept. 5).

"There’s something we can point to," he said. "They did an awesome job on the NDAA, that’s just earth-shattering."

The Senate Armed Services Committee also included a section in its bill report urging DOD to undertake a climate threat assessment and make more thorough plans for rising seas and a melting Arctic.

And though the Senate bill itself doesn’t have any provisions that specifically mention climate, it does include language on an important emerging priority for the Coast Guard in a warming Arctic: polar icebreakers.

The bill would authorize the Coast Guard to procure up to six new icebreakers, a major upgrade to the nation’s beleaguered fleet of polar ships.

The military only has two serviceable icebreakers, and Coast Guard commandants and climate experts have been urging lawmakers to build more for over a decade (Climatewire, July 26).

The perfluorinated chemicals were used in Air Force firefighting foam for decades. U.S. EPA and 3M Co., the manufacturer of the foam, began raising concerns about PFOS and PFOA in the late 1990s, and EPA issued two public health advisories, one in 2009 and one in 2016 (Greenwire, Jan. 31).

After much public rumbling, DOD began its own cleanup effort, and the Pentagon says it’s made progress over the past seven years to come up with solutions.

Now, Congress is stepping in, too. Pennsylvania Republican Sen. Pat Toomey proposed an amendment to the Senate NDAA last month that would require the Pentagon assess chemical exposure of residents near eight former military installations in his home state.

Both the House NDAA and this summer’s minibus appropriations package included provisions on PFOS and PFOA, as well. Lawmakers in July approved a $30 million amendment from Rep. Brendan Boyle (D-Pa.) to help pay for the Navy and Air Force to mitigate drinking water contamination from the chemicals (E&E Daily, July 28).

Those measures mark the first steps toward congressional endorsement of the cleanup effort, but they may not be enough. Chemical contamination is a national problem that affects over 200 military installations, and Pentagon officials say the cleanup effort will take decades and cost billions of dollars.

"By rough, back-of-the-envelope calculations, I figure it’s going to add about $2 billion to our cleanup liability in the department, which is a lot of money," Maureen Sullivan, deputy assistant secretary of Defense for energy, installations and environment, said during a webinar last week.

The NDAA debate is colored by efforts by the White House and some members of Congress to remake the nation’s defense policy. They want to vastly increase funding and remedy readiness issues that have come to light in the past few years.

The Senate bill largely reflects that push, with an increase to funding authorization more than $30 billion above the president’s request.

"The project is unaffordable and risky," the statement says.