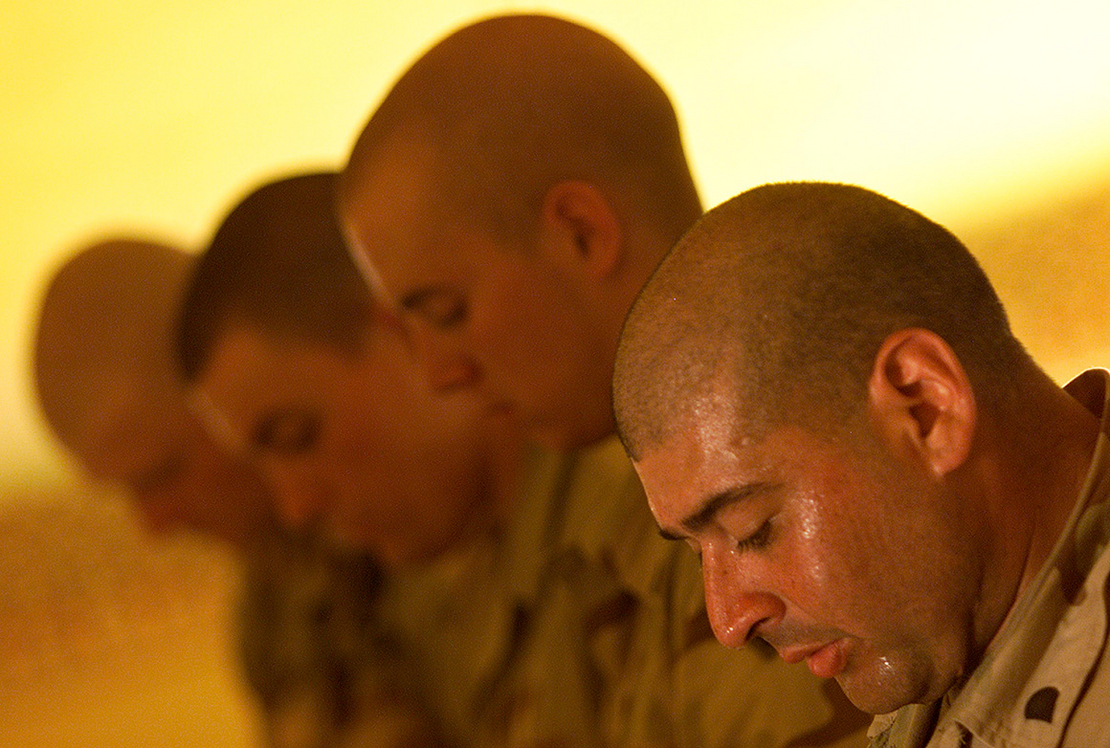 Spc. Rudy Rosalez (right) of Victoria, Texas, sweats in the heat as he prays with others at a Sunday service at Camp Pennsylvania in Kuwait in April 2003. AP Photo/Saurabh Das

Biden signed an executive order earlier this month directing the government to reach 100 percent carbon-free electricity by 2030 and net-zero emissions by 2050. It also calls for eliminating climate pollution from federal buildings and vehicles.

But the executive order exempts anything related to national security, combat, intelligence or military training.

That means Biden’s order covers only a fraction of federal emissions. While military leaders insist they share the president’s decarbonization goal, there is no plan for them to meet it.

Since 2001, the military has accounted for 77 to 80 percent of federal energy use, according to a 2019 study released by Brown University’s Watson Institute for International and Public Affairs. And it consumes more petroleum than any other institution in the world — more than most countries. (The administration estimates the military’s pollution is roughly 56 percent of federal emissions, but independent estimates suggest it’s much higher.)

“Clearly, if you reduce [emissions from] the rest of the U.S. government but leave the military untouched or let them sort of go at their own pace — that’s not going to get you the kind of reductions that you want out of the U.S. government,” said Neta Crawford, co-director of the Watson Institute’s Costs of War Project and author of the study estimating U.S. military emissions.

The Defense Department has no decarbonization targets. It has counted on other sustainability policies to include climate benefits.

“DoD does not have any initiatives to reduce GHG,” according to the department’s 2020 sustainability plan, referring to greenhouse gases. “However, the implementation of energy efficiency, energy security, renewable energy, and other improvement projects collectively contribute to the reduction of GHG emissions.”

Last month, Deputy Defense Secretary Kathleen Hicks said the Pentagon is working on a new sustainability plan that would include a “path for reducing greenhouse gas emissions.”

Experts expect the Defense Department will purchase increasingly large amounts of electric vehicles, renewable energy and other clean technology. But many experts question how deeply the military can decarbonize its operations. Biden’s executive order, they say, allows the military to sidestep hard choices about its massive pollution.

Decarbonizing the military poses a political problem as much as a technical one, experts said. There’s no ready alternative to the military’s largest source of emissions: jet fuel. But there are ways to use less of it, such as closing bases, performing fewer operations or retiring older combat equipment.

Implicit to those approaches, experts said, is rethinking the way the United States uses its military.

“The real way to reduce the carbon footprint of the military is to reduce its global footprint,” said Heidi Peltier, a senior researcher at Brown University and director of programs at the Costs of War Project.

To an extent, the Pentagon wants to do some of that within the United States. But it has been stymied by lawmakers whose districts benefit from building weapons systems or keeping bases open.

The Pentagon said in 2017 that about one of every five military bases was unnecessary. But Congress has locked in the existing number of bases, most recently through the 2022 National Defense Authorization Act. Likewise, the latest defense bill prohibits the military from retiring the A-10 Warthog, the attack plane first produced in the 1970s that can take over 3 gallons of fuel to fly 1 mile.

Even if the Pentagon got its way on those issues, though, its emissions would remain globally consequential. It would take deeper changes, experts said, to align the U.S. military with the world’s climate benchmarks.

“The little things are well worth doing,” said William Hartung, director of the arms and security program at the Center for International Policy. But “if you had a rethinking of the U.S. global footprint, that would have the greatest impact on reducing the Pentagon’s use of fossil fuels.”

About 30 percent of the Defense Department’s emissions come from facilities, while about 70 percent come from operations.

Those operations include things such as aircraft carrier patrols through important maritime trade routes. Carriers are nuclear-powered, but their support ships are not. The Navy is required by law to operate at least 11 aircraft carriers, and it is currently building new ones.

“What the United States has been about for the last 30 years is preserving American preeminence. And frankly, it’s preserving preeminence at the cost of high levels of emissions,” said Crawford, who is also the chair of Boston University’s political science department.

“DOD says that climate change is an enormous threat to our national security,” she added. “But its own emissions are making us less secure.”

The military sees some climate policy as aligned with its missions.

For instance, the military has identified fuel convoys as a combat vulnerability, so the Defense Department has turned to solar panels to reduce their reliance on diesel generators.

The Defense Department accounts for about half of the government’s renewable power usage. In 2019, the department awarded about $820 million in performance-based contracts aimed at boosting its facilities’ clean energy and energy efficiency.

Biden has said it was the military’s own warnings that made him take climate change so seriously.

“When I was over in the tank in the Pentagon, and I was first elected vice president with President Obama, the military sat us down to let us know what the greatest threats facing America were, the greatest physical threats,” Biden said earlier this year, recounting a story he’s told often.

“This is not a joke. You know what the Joint Chiefs told us the greatest threat facing America was? Global warming.”

Cutting emissions, though, has been a lower priority than boosting resiliency.

Biden requested $715 billion for the latest defense bill. Of that, $617 million was earmarked for climate — and of that, $135 million was requested for decarbonization, with the rest of the climate funds going to resiliency, research and war games.

“Their focus has more been, are their bases going to be underwater? Is it going to create more conflict?” Hartung said. “They’ll always take a somewhat narrower view, which won’t put climate front and center.”

Power of the purse

Some experts have big expectations for the Defense Department’s climate policy. They see eagerness among the armed forces to decarbonize. And they suggest the trend could carry over to broader society.

By leveraging the government’s purchasing power, Biden’s order aims to reorient the private sector toward low-carbon products. The more green products the government buys, the thinking goes, the easier it will be for companies to sell the same things cheaply to the public.

It also could force companies to lower their own emissions in order to win government contracts.

“If the military were to lead the way in requiring greater fuel efficiency and greater energy efficiency and lower greenhouse gas emissions among its contractors — that is many of the largest companies and manufacturers in the country, and in the world,” said Linda Bilmes, a professor of public policy and finance at Harvard University.

“That alone could make a significant impact on changing the trajectory of the country,” she said.

The Pentagon’s purchasing power is mammoth. For instance, its non-tactical fleet of vehicles ranks as the government’s second-largest, after the U.S. Postal Service.

Hicks, the deputy Defense secretary, last month visited General Motors Co. to hear how the auto company could electrify military vehicles. Afterward, in a speech at Wayne State University, she said the department was committed to making “significant changes in our use of energy.”

Those kinds of actions demonstrate how seriously the military is taking decarbonization, regardless of the exemptions in Biden’s executive order, said Erin Sikorsky, director of the Center for Climate and Security.

“I don’t think [Hicks] would be out there speaking publicly on this topic, engaging with the private sector… if there weren’t plans within the department for strong action on cutting emissions,” she said.

Sikorsky also pointed to how often the White House cited military initiatives or Pentagon expertise in its governmentwide sustainability plan: Marine Corps Logistics Base Albany in Georgia is working toward net-zero emissions, and Edwards Air Force Base built a 650-megawatt solar power array.

“I don’t think DOD can just say, ‘Everything we do is a carveout, and therefore we met the target because the denominator is zero,’” Sikorsky said.

“I think the key, though, to ensuring DOD action is to make sure it’s clear to them that there are operational benefits, strategic benefits to pursuing renewable energy,” she added. “It’s not just that what you’re doing is good for the environment, but what you’re doing actually serves DOD’s mission.”