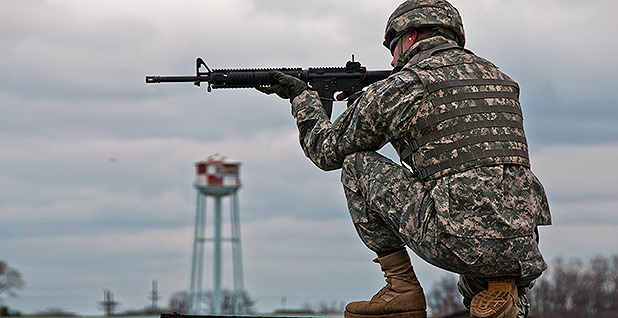 The Ohio Air National Guard is scrapping plans to build a wind turbine along the shores of Lake Erie after two advocacy groups filed a federal lawsuit claiming the project would be disastrous to sensitive migratory bird species.

But ABC and the Black Swamp Bird Observatory announced today that the Ohio Air National Guard has told them it will not build the turbine, which it wanted to use to test wind energy and evaluate potential impacts to migratory birds in the region as it works to move toward more renewable energy sources.

The Air National Guard "has not rendered any final agency action which approves or otherwise authorizes the Project, and has no plans to take such action or to continue any environmental review or construction of the turbine at Camp Perry," Benjamin Lawless, chief of the National Guard Bureau’s asset management division, wrote in a June 13 letter to a Washington attorney representing the conservation groups.

As a result, ABC and the Black Swamp Bird Observatory filed a motion today with the federal court dropping its lawsuit, which also listed the Interior Department as a defendant.

"ABC is delighted that the Ohio Air National Guard has finally decided not to develop a large wind turbine at Camp Perry in one of the world’s largest concentrations of migratory birds and bats," Michael Hutchins, who directs ABC’s Bird-Smart Wind Energy Campaign, said in a statement. "This reaffirms the Department of Defense’s record on wildlife conservation, and sends a message to other wind energy developers who have their eyes on the Great Lakes."

The conservation groups say building a large wind turbine close to the shores of Lake Erie would have presented an "extremely high risk" to migrating songbirds, including the federally endangered Kirtland’s warbler, as well as possibly to bald eagles, other raptors and waterfowl.

The groups said in a statement that the decision not to build the turbine represents an "important precedent because many other wind energy projects are currently being planned around the Great Lakes."

The conservation groups say FWS conducted a radar study that found excessively high risks to birds and bats from wind turbines placed along the shores of the Great Lakes.

The Fish and Wildlife Service has recommended that no turbines be built within 3 miles of the Great Lakes shoreline; ABC has requested the service extend that setback to 5 miles.

"Camp Perry is a cautionary tale about how location does matter," Hutchins said. "Rules must be followed, and similar projects should not threaten federally protected bird and bat species."