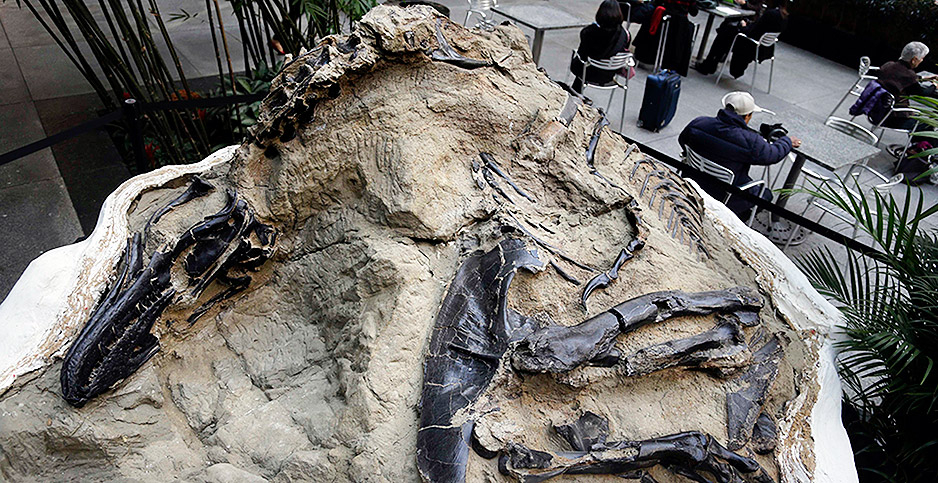 One of two “dueling dinosaur” fossils discovered on Mary Ann and Lige Murray’s ranch in Montana is on display at a 2013 auction in New York. Seth Wenig/File/Associated Press

Pristine dinosaur fossils discovered in Montana have sparked a property rights dispute that has hit paleontologists like an asteroid.

The lawsuit, now at the Montana Supreme Court, concerns who owns some of the greatest fossil finds in the last century, including two dinosaurs preserved while locked in combat and a rare complete Tyrannosaurus rex skeleton.

They are worth millions, and paleontologists say a federal appeals court ruling would have "fundamental and extraordinary impacts upon the conduct of science concerning the history of life on Earth."

The case hinges on a seemingly straightforward question: Are fossils considered "minerals" under Montana state law?

In Montana, rights to a property’s mineral estate are often severed from its surface rights. Historically, fossils have been considered part of the surface estate.

That all seemed to change last November when the 9th U.S. Circuit Court of Appeals sided with the owners of the mineral rights of a ranch where the fossils were found.

The ruling sent shock waves through the paleontology world, threatening to upend the way fossil hunters have operated for decades.

It would make searching for fossils extremely complicated, said David Polly, a former president of the Society of Vertebrate Paleontology, because paleontologists would need to navigate both surface ownership — to get to the dig location — and mineral ownership of a parcel. Often, mineral rights are hard to find and frequently change hands between large corporations.

More alarmingly, he said, it could raise questions about the ownership of fossils currently in museums.

"In principle, it could have opened those to post hoc challenges," Polly said. "If those started disappearing from collections, it would be a disaster."

Polly’s group, as well as several museums across the country, got involved after that 9th Circuit ruling. They enlisted Gary Guzy, the former White House Council on Environmental Quality and EPA general counsel.

Now, they’ve convinced the San Francisco-based 9th Circuit to pump the brakes. It has referred the case to the Montana Supreme Court, where it will be taken up later this year.

Guzy, who now works for the firm Covington & Burling LLP, said his clients quickly realized the scope of the 9th Circuit decision.

"What seemed apparent was that what had been depicted all along as a private party contractual and almost property dispute really had significant implications for the paleontological profession," he said, "and the range of institutions that are involved in promoting the knowledge of the history of life on Earth."

‘Greatest paleontological find of this century’

Spanning parts of Montana, the Dakotas and Wyoming, the Hell Creek Formation is one of the world’s most studied areas for clues into life some 66 million years ago.

Within the formation is a tract of land in Garfield County, Mont., that was previously owned by George Severson.

Around 1983, Mary Ann and Lige Murray leased the land from Severson and worked it as ranchers. Over the following years, Severson transferred parts of the land to the Murrays and his two sons — Jerry and Bo Severson.

In 2005, the Severson sons agreed to sell the surface rights to the Murrays while retaining much of the mineral rights.

The value of those rights quickly escalated.

Shortly after the sale, the Murrays and an amateur fossil hunter, Clayton Phipps, found on their property a mother lode of fossils — a "spike cluster," as it is known in paleontology.

In 2006, they discovered complete fossils of two dinosaurs that appear to have been fighting when they died.

The Murrays quickly named the fossils the "Dueling Dinosaurs," and the scientific importance of the fossils is hard to overstate, said paleontologist Peter Larson, president of the Black Hills Institute of Geological Research in Hill City, S.D.

"The Dueling Dinosaurs are probably the greatest paleontological find of this century," said Larson, who has seen the fossils and spoken with the Murrays.

Larson explained why such a find is so rare. The dinosaurs appear to have been fighting on a sandbar in the middle of a river. Something happened — probably an earthquake — that liquefied the sand underneath them, sucking them down and preserving their skeletons.

"It is a pristine record of an interaction between a prey animal and predator," he said, adding that they were the most pristine complete dinosaurs ever found in the area.

Then came perhaps the pièce de résistance. In 2013, a complete T. rex was discovered on the property.

The "Murray T. rex" is considered one of only a dozen ever found in such condition.

When the Seversons got word of the finds, they quickly sought to declare ownership of the fossils, including the T. rex, which the Murrays were trying to sell to a Dutch museum for several million dollars.

The Murrays filed a lawsuit seeking a declaration that the fossils were theirs because they owned the surface rights to the land.

A district court sided with the Murrays, leading the Seversons to appeal to the 9th Circuit.

There, in a colorful opinion, the court sided with the Seversons.

"Once upon a time, in a place now known as Montana, dinosaurs roamed the land," wrote Eduardo Robreno, a senior Pennsylvania district judge who was on the panel by designation.

"On a fateful day, some 66 million years ago, two such creatures, a 22-foot-long theropod and a 28-foot-long ceratopsian, engaged in mortal combat. While history has not recorded the circumstances surrounding this encounter, the remnants of these Cretaceous species, interlocked in combat, became entombed under a pile of sandstone. That was then … this is now."

Quickly, some of the most important players in the field weighed in, including the 2,200-member Society of Vertebrate Paleontology, the Field Museum of Natural History in Chicago and the Museum of the Rockies.

They, along with a Montana property rights group, backed the Murrays in court documents when they asked the court to reconsider the case — or send it to the Montana Supreme Court.

"The panel’s decision imposes extraordinary uncertainty upon scientists and the public," they wrote, and it may "destabilize title to countless important fossils in academic, museum, and private collections around the world … potentially subjecting those fossils to ownership challenges by holders of Montana mineral deeds."

The 9th Circuit took the unusual step of granting the rehearing, vacating their earlier decision and then punting the question to the Montana Supreme Court — a good sign for the Murrays.

"Given the frequency of divided ownership of Montana surface and mineral estates, and that Montana possesses vast deposits of valuable vertebrate fossil specimens, the issue is substantial and of broad application," the court wrote.

"Therefore, after considering these factors, and in the spirit of comity and federalism, we exercise our discretion to certify this question to the Montana Supreme Court."

Other aspects of the dispute also appear to be breaking the Murrays’ way.

In April, Montana enacted a law that states "fossils are not minerals and that fossils belong to the surface estate."

The law, however, does not apply to existing disputes, though the "Dueling Dinos" case is likely the only existing matter of its kind.

"One can always make assumptions, and courts can do whatever they want," Larson said. "But it seems like our side is in a good position."