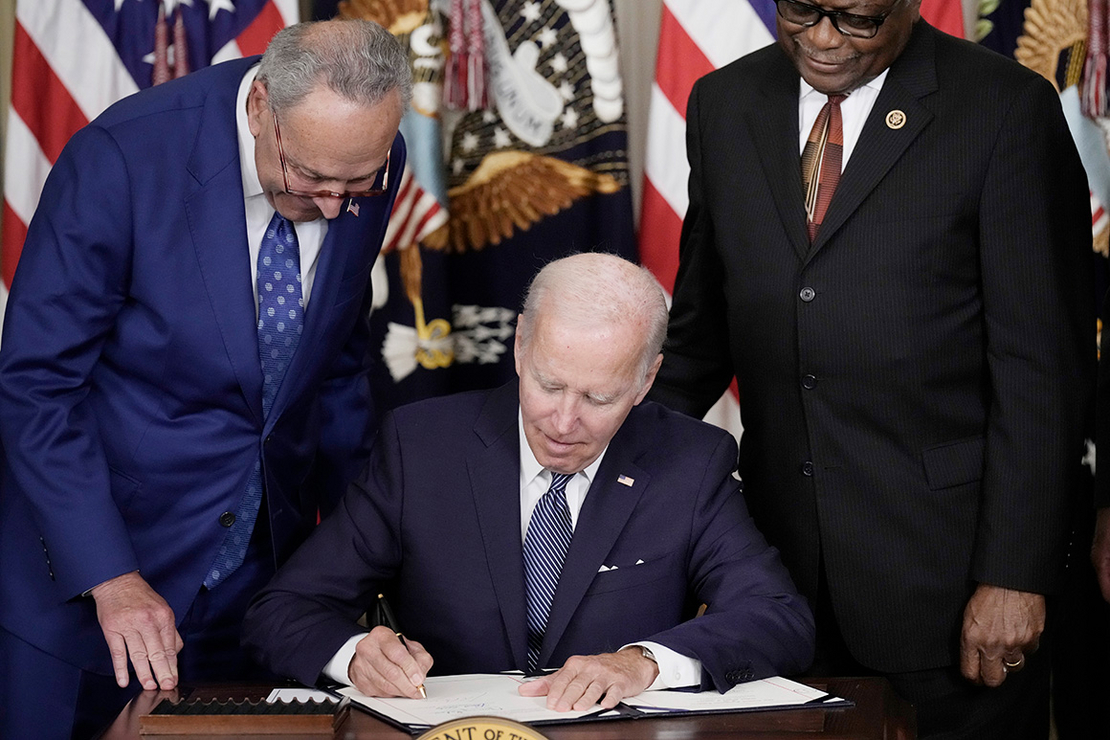 The Inflation Reduction Act, which President Joe Biden signed into law Tuesday, is chock full of mining industry benefits — including a large tax break to any mining company that can produce amounts of minerals central to energy transition products like electric vehicles.

Many in the industry are in full celebration mode.

“It’s a big deal,” said Jonathan Evans, president and CEO of Lithium Americas Corp. “We’re delighted with it.” His company, which is working to build the largest lithium mine in the United States, is considering building a second U.S. mine, he said, citing optimism over the demand for domestic minerals.

Mining companies are expected to see more widespread demand from the auto and battery manufacturing sectors under the law, because of mineral sourcing requirements that must be met to qualify for the new expanded EV tax credit. This language was added to the bill at the request of Sen. Joe Manchin (D-W.Va.). EV backers have groused at the provision, which will limit the tax credit for those purchasing such vehicles (E&E Daily, Aug. 8).

But for those in the mining sector, the new law is a bonanza.

The climate law is the latest in a string of wins for minerals players, who for years have warned the U.S. was ceding ground to China. Both the bipartisan infrastructure bill and the recently enacted bill aiding the semiconductor industry are expected to juice local demand for minerals. The Biden administration has also taken action to boost the industry.

According to some industry projections, a host of minerals are expected to see soaring demand amid the transition away from fossil fuels. For EVs and batteries, those minerals include lithium, cobalt, nickel and graphite. Hydrogen fuel cells and solar panels also require their own sets of minerals, like palladium or tellurium.

Earlier this year, Biden invoked the Defense Production Act to boost the development of those “critical minerals,” which are a class of heavily imported hardrock commodities determined by the federal government to be essential for national and economic security (Greenwire, April 4).

In addition, the Energy Department has continued a Trump-era decision to use “clean energy” loan programs for battery technology innovation as a way to assist the mining and metals sector. Officials last month announced they closed on the first-ever loan to a mineral processing facility located in Louisiana (Greenwire, May 11).

These laws and regulatory decisions “play a really strong role” in giving “confidence” to investors, mining and manufacturing companies, and consumers around supply and demand expectations related to the mineral supply chain, Coltelli said.

‘Reason to be more jubilant’

Evans, the CEO of Lithium Americas, is developing what is expected to be the biggest lithium mine in the U.S. at Thacker Pass in Nevada. He said his company is so optimistic about U.S. demand for minerals and the federal government’s view of the mining sector that it is now considering a second mine in the U.S. before Thacker Pass has even been constructed.

He credited the climate law for some of this optimism, calling it “a significant step in the right direction toward fighting climate change and securing our country’s future by onshoring the manufacturing essential to reduce carbon emissions.”

Barbara Little, a spokesperson for U.S. lithium chemicals producer Albemarle Corp., told E&E News in a statement the company sees the climate law “as a positive step forward in support of attracting EV supply chain investment domestically to support the transition to clean energy in the U.S.”

Another delighted firm is Talon Metals Corp., a junior exploration company. Talon Metals is developing a nickel project in northern Minnesota with global mining conglomerate Rio Tinto. That project got a shoutout from the White House in a press release earlier this year.

After the climate legislation passed the Senate earlier this month, the company announced it secured exploration rights on 400,000 acres of land in Michigan’s Upper Peninsula in order to look for more nickel — and named Manchin in their press release about the deal.

Todd Malan, chief external affairs officer for Talon Metals, said in an interview that the requirements in the EV tax credit are providing “important encouragement” to the auto sector and the Biden administration “to focus on the early part of the supply chain” for EVs.

“That, to me, is a directional impetus,” Malan said.

Malan also said the tax break for mining companies could prove useful because developing a mine can require an incredible amount of upfront capital spending up.

“The [spending] upfront, when you basically take into account the cost of exploration, the cost of permitting, the cost of building a facility … the upfront [spending] is huge and can take a long time to earn out of,” he said. “This really moves the needle in terms of bankability of projects and economic viability.”

The law is also exciting mineral processing companies, which play a crucial role in the midstream of the mineral supply chain.

John DeMaio, CEO of graphite processing company Graphex Group Ltd., said there is “reason to be more jubilant” about the climate law because “it definitely indicates positive movement” and “real on-the-ground dollars and cents toward electrification.” Graphex recently announced it would be building its first facility in Warren, Mich., near the heart of Motor City.

“I think the bill does force, or motivates, the industry to create the midstream processing,” DeMaio said. “The beauty of the midstream capability [is] that can be located really anywhere.”

EY’s Coltelli said all of the action in the mineral supply chain will prove beneficial for the U.S. marketplace for EVs by fostering “collaboration across the ecosystem” with “every industry working together to make this a success.”

“This is hugely exciting for the industry and will certainly start to center value creation in EV adoption here,” he said.

There are certainly some losers in the mining industry. Coal companies, for instance, have run into roadblocks from regulators. Last week, the Interior Department reimposed a ban on federal coal leasing.

Permitting is another concern for the mining sector. Over the last decade, the number of new applications to build a mine on federal lands has declined almost every year, according to data obtained by E&E News. Some in the industry have cited economic uncertainty as a reason for the decline (Greenwire, Aug. 9).

This fall, observers will be watching to see if Congress can pass changes to the federal permitting regime requested by Manchin, who made a deal on permits a precondition for his vote on the climate bill (Energywire, Aug. 4).

Progressives have been deeply skeptical of the permitting overhaul effort (E&E Daily, Aug. 15). Yesterday, Rep. Raúl Grijalva (D-Ariz.) wrote an op-ed vowing to “fight against” any permitting overhaul bill, calling it a “mishmash of long-desired permitting shortcuts that will further inflate oil company profits at the expense of our environment and communities.”

In an interview with E&E News, he said such an effort “effectively contradicts some of the strong things we [achieved] for the climate, because it would expedite everything and neutralize [the National Environmental Policy Act].”