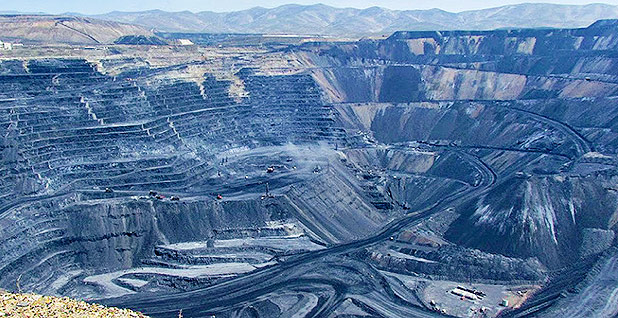 The Democrats' takeover of the House may be pivotal for mining policy. Government Accountability Office

A power shift in the House and a new crop of lawmakers have mining critics reviving their attempt to fundamentally change the law that governs the practice, and companies are readying their counterattack.

Step one for reformers is a major education campaign on the 1872 General Mining Act; step two is navigating the new political landscape on Capitol Hill.

Leading the reform charge will be Raúl Grijalva (D-Ariz.), who will chair the House Natural Resources Committee and plans to introduce his sweeping legislation in May — the 147th anniversary of the bedrock mining law.

The most recent iteration, H.R. 5753, would have replaced mining claims with a federal leasing system similar to other commodities.

Under the 1872 law, claims override other public land uses, but Grijalva’s bill would have allowed agencies to restrict mining in certain areas and limited leases to 20 years. Hardrock mining companies would also have had to pay a federal royalty for the first time ever.

The industry fiercely defends the claim system but has left the door open for a production fee that would help pay to clean up the pollution legacy of roughly half a million abandoned hardrock sites nationwide.

"We have not said no, but what we have seen in the recent past has been so unreasonable it’s a non-starter," National Mining Association top lobbyist Rich Nolan said. "If they are reasonable, we’ll talk to anybody, and we’re happy to have a conversation about that."

Beyond taking over the House, Democrats have more flexibility following the retirement of former Senate Democratic Leader Harry Reid (D-Nev.). A miner’s son, Reid staunchly defended mining, one of his state’s top industries, from many reform attempts within his own party.

Republicans, however, still control the Senate, where the mining agenda is not expected to change. It will be to encourage rather than restrict extraction.

Though a 2016 Government Accountability Office report found the average mine took two years to approve, companies cite research putting the average at seven to 10 years.

Likely to resurface is legislation from Rep. Mark Amodei (R-Nev.) to set timelines and put a single agency in charge of National Environmental Policy Act reviews. Murkowski’s more moderate efforts have for years been part of her broader energy reform package.

President Trump, at the mining industry’s insistence, tried to address the critical mineral issue with Executive Order 13817, requiring the U.S. Geological Survey to compile a list of 35 elements and giving the Department of Commerce 180 days to issue a report on how to increase domestic mining (Greenwire, May 18, 2018).

Though that deadline passed in November and Commerce officials have not commented on the report’s status, industry groups remain confident that they will get the results they want.

"We are optimistic that we’ll see something next year that sets out some guideposts on how essential critical minerals are to the economy, what the pressure points are, and how we can better produce and access them domestically," Nolan said.

The Forest Service has already tried to speed up mine permitting in direct response to the presidential directive.

"This change should enhance operators’ interest in, and willingness to, conduct exploratory operations on National Forest System lands and ultimately increase the production of critical minerals," the Federal Register notice stated.

The administration has also considered adding mining to the list of industries eligible for a condensed NEPA process under the Fixing America’s Surface Transportation (FAST) Act (Greenwire, Feb. 22, 2018).

Steve Moyer, government affairs director for Trout Unlimited, hopes a proposal to strip liability for so-called good Samaritans volunteering to clean up both abandoned hardrock and coal mines will gain traction — and some bipartisan support — this Congress.

Industry backs the legislation, but Trout Unlimited, which has spearheaded good Samaritan efforts for more than a decade, knows they must deal with perennial concerns from Democrats and environmentalists — something even Gardner acknowledged.

"The good news is as a pure matter of public policy, there is a way forward that we could support," said Aaron Mintzes, senior policy counsel for watchdog Earthworks, but "it would require some major changes."

Earthworks, which opposed the Gardner-Tipton legislation, worries about a lack of recourse if environmental conditions get worse under the pilot program’s waivers for NEPA, the Clean Water Act and Superfund standards.

With environmentalists more focused on 1872 law reforms, Trout Unlimited is keeping all options open for how to pass a bipartisan good Samaritan bill.

"To have the bill out there helps to get more people to focus on it, hopefully work on it and provide good, constructive criticism, and then we can get it done next year, we hope," Moyer said.

Last year, Rep. Darin LaHood’s (R-Ill.) H.R. 2937 passed the House but died in the Senate (E&E Daily, March 16, 2018). Moyer said that electoral politics got in the way, something that will be less of a factor this year.

"The beauty of a divided Congress … is all sides feel like they have a backstop," he said. "People are less worried about being run over, and there’s more opportunity to compromise."

The Interstate Mining Compact Commission, which represents state mining regulators, welcomes outside support to help at least bring things like water quality closer to federal standards at mine sites.

"There is a lot of good that could be accomplished by not making those who would stick their necks out to do it responsible for the perfect," IMCC Executive Director Tom Clarke said.

Clarke’s top priority is reauthorization of the Abandoned Mine Land (AML) fee that pays for cleaning up old coal sites through a per-ton tax on coal production.

The fee, which sustains IMCC’s member agencies, expires in 2021. But since the last renewal took a decade to hammer out, IMCC’s legislative specialist, Ryan Ellis, said state reclaimers plan to make it a top priority this year.

Industry already fired a warning shot two years ago, opposing reauthorization until reforms are made to how the federal Office of Surface Mining Reclamation and Enforcement (OSMRE) and state agencies spend the money (E&E Daily, Oct. 20, 2017).

"We’ve seen so much waste that throwing good money after bad — to be used for purposes other than those for which AML was created and funded by a tax on mining — makes little sense," Nolan said.

IMCC, meanwhile, takes issue with NMA’s calculation that only 1 in 3 AML dollars has gone toward reclamation.

OSMRE counters that $5.5 billion of a total of $8.5 billion made available by OSMRE has gone to states for reclamation and that the remaining $3 billion went to emergency reclamation projects and United Mine Workers of America retired coal miner health care payments approved by Congress.

"The states have about 8 percent of their money going toward overhead," Clarke said. "I challenge anybody to find a more efficient federal program."

IMCC points out that OSMRE estimates at least $10.5 billion in reclamation still must be done — more than the roughly $9.5 billion collected overall since the fee was first imposed in 1977.

Ellis downplayed disputes between states over the AML grant distribution formula, as none want to see the program end, starving funding for ongoing projects like water treatment plants (Greenwire, Sept. 29, 2016).

In Congress, however, AML reauthorization must compete with a slew of issues, including the search for the next Interior boss, not to mention the long-standing director vacancy at OSMRE.

And even though the issue is important to House Democrats, Grijalva does not currently plan to hold hearings on the subject during the first half of the year.

Grijalva plans to renew a series of document demands about various controversies that agencies ignored when his party was in the minority.

Trump officials claimed halting the "duplicative" study was part of a departmentwide review of $100,000-plus grants, but an Interior inspector general report found scant evidence of that, and none of the National Academies’ seven other projects receiving more than $100,000 from Interior were stopped (E&E News PM, June 14, 2018). Grijalva also plans to hold hearings.

The chairman is similarly rerequesting documents on the critical minerals list. He and other advocaes have made their feelings known about inclusion of uranium on the list of "non-fuel" minerals (E&E News PM, May 21, 2018).

With the long, toxic legacy of nuclear fuel mining in the West, including Arizona, the congressman and conservationists are keeping a close eye on the Obama-era mineral withdrawal blocking new uranium development on either side of the Grand Canyon.

Former Interior Secretary Ryan Zinke pledged not to lift the Obama-era ban, but groups remained so worried that Trump would move to help struggling uranium mining companies that they released a specialty beer to raise funds (Greenwire, Sept. 28, 2018).

The most active uranium firm near the Grand Canyon, Energy Fuels Inc., was one of two mining companies that petitioned the Trump administration to consider "Buy American" quotas for uranium — 93 percent of which currently comes from overseas.

The Commerce Department is conducting the review under Section 232 of the Trade Expansion Act, the once-obscure law Trump has used to impose controversial trade protections for steel and aluminum (E&E News PM, Sept. 28, 2018). A decision is slated for April.

As for several decisions paving the way for a major Minnesota copper-nickel mine, Grijalva will likely have help scrutinizing federal agencies from Minnesota Rep. Betty McCollum (D), who will chair the House Interior, Environment and Related Agencies Appropriations Subcommittee.

Trump heeded calls from many to help reinvigorate the former Iron Range region, but others said Trump officials ignored new information about the risk of mining to not only the environment but recreation-based businesses (Greenwire, Dec. 10, 2018).

Another mine looming over Congress is the Pebble project. A draft environmental impact statement for the major gold and copper proposal in southwestern Alaska is due out this month (Greenwire, Dec. 13, 2018).

Pebble CEO Tom Collier said appeals for the Army Corps of Engineers to delay the project are "attempts to drain developers of their financial resources or extend the permitting timeline to allow for a possible change in the political environment."

Opponents say the same is true of a permitting timeline ending during Trump’s first term. Heightening fears are rumors that EPA will soon issue a proposed rulemaking reining in the agency’s "veto" authority over Army Corps permits — a power that the Obama administration deployed to block Pebble and protect the salmon of Bristol Bay (Greenwire, Aug. 17, 2018).

"This is the most important [dredge and fill] permit that the corps ever looked at," said Moyer of Trout Unlimited. "Just to have them moving forward so fast, seemingly bent on impressing the president in showing how fast they can move, is exactly the wrong way to go about it."