Mining the sky for CO2 with metal trees, towers and pumps 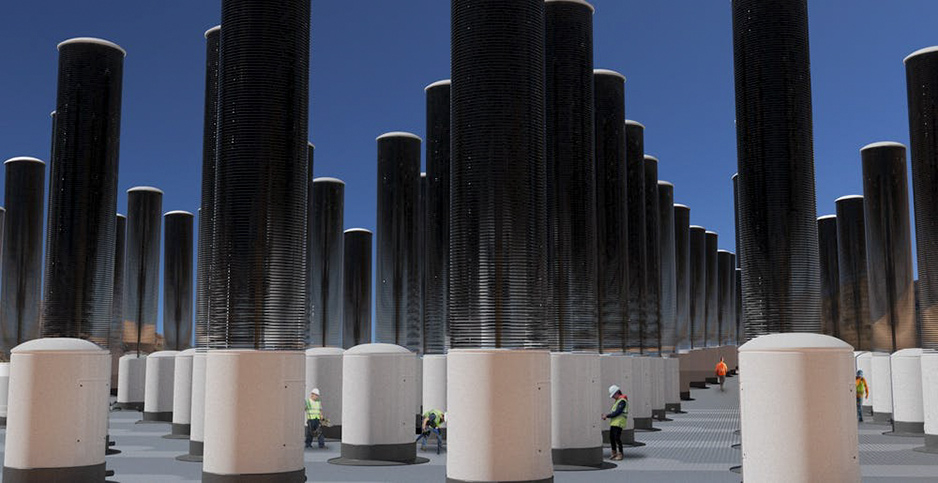 In the 1990s, a physicist at the Department of Energy’s Los Alamos National Laboratory made a prophetic discovery that might help reverse today’s climate change.

Klaus Lackner was helping his daughter, Claire, with an eighth grade science project. She was using an aquarium air pump and a chemical, sodium hydroxide, to pull carbon dioxide out of the air. It worked. She won a prize.

That got Lackner thinking about ways to pull billions of tons of CO2 out of the air, which, he envisioned, might be the cheapest way to tackle the climate change problem.

The idea seemed far-fetched to many scientists and other experts. Extracting CO2 from the air, where it is most diluted, might require three times the amount of energy needed to remove it from smokestacks. Lackner’s ambition was to develop a "mechanical version" of how a tree consumes and stores the invisible, odorless gas.

Because CO2 is steadily raising the planet’s average temperatures, he did arouse some interest.

Discover magazine hailed the notion in 1995 as "one of the 7 ideas that can Change the World." Then nothing much happened for about 20 years.

There are three rapidly growing companies forming commercial partnerships to reduce CO2 around the globe. They include some of the world’s largest energy and engineering businesses. They want to rapidly scale up the process of direct air capture to reduce the climate change problem and make money.

"Can we afford not to do this?" was the way Steve Oldham, the CEO of Carbon Engineering, headquartered in Squamish, British Columbia, put it in a recent TED Talk. He estimated that climate-related damages will eventually cost the U.S. over $500 billion a year "if we don’t do something about it."

His company plans to build a commercial-size plant for direct air capture next year in the oil-rich Permian Basin in the southwestern U.S. It would capture a million tons of carbon dioxide and store it permanently underground. The company hopes to make a profit by selling some of the CO2 for the purpose of pushing more oil out of the area’s reservoirs.

The company also has a pilot plant in Canada that breaks down the molecules of CO2 to obtain carbon monoxide. It blends that with hydrogen, created in part with electricity from solar and wind. The result will be low-carbon fuels for heavy trucks and jets.

Oldham’s company has a partnership with Occidental Petroleum Corp. on the Permian Basin project. Another U.S. oil major — Chevron Corp. — is an investor in Carbon Engineering, which has other partnerships with energy companies in Europe to capture and store CO2 in played-out natural gas reservoirs under the North Sea.

"Companies are beginning to calculate the cost of their carbon footprints and ways to reduce it," Oldham explained in an interview. "I think we can employ a lot of people."

The processes used by Carbon Engineering were developed by David Keith, a professor of applied physics and public policy at Harvard University. He founded the company and sits on its board. He is perhaps better known for promoting a geoengineering experiment: the possibility of using aerosols to shade the Earth from sunlight as CO2 reflects more solar heat back to Earth (Climatewire, July 3, 2019).

Keith has been an adviser to Bill Gates, the billionaire founder of Microsoft Corp. According to Oldham, Gates is now the largest investor in Carbon Engineering, which Keith started in 2009. Keith recently explained in a YouTube presentation how the business came together after a plunging drop in the price of solar energy.

The chemistry to capture CO2 from the atmosphere was already known, Keith said. So was the process of turning CO2 into synthetic low-carbon fuels, such as diesel oil and jet fuels.

"That technology is old, and it’s absolutely vanilla; we know how to do it," he said in the video.

But there was a problem: The energy required for both steps was too expensive, and the rapid plunge of solar power provided a wake-up call.

"A big chunk of innovation was, in fact, not to innovate," Keith said. If the world wants to decarbonize, he explained, the possibility of extracting large volumes of CO2 from the atmosphere and storing it in products will become a reality "soon after 2030."

‘No one else would do it’

The year 2009 was also a pivotal point for Graciela Chichilnisky, a professor of economics and risk management at Columbia University. It was then that she put together Global Thermostat, a company whose global reach may loom larger than Carbon Engineering’s.

As she explained in an interview, her idea was straightforward: Form a company to remove CO2 from the air "at a very low cost, sell the CO2 and make money." The actions were possible, she had concluded, "but probably no one else would do it unless I did it."

So she became the CEO.

Peter Eisenberger, a physicist and former director of Exxon Mobil Corp.’s research and engineering laboratory, was a co-founder of Global Thermostat and became its chief technology officer. Edgar Bronfman Jr., the head of a venture capital firm and heir to the Seagram liquor fortune, became its executive chairman and first investor.

While they use different and patented chemical processes, both companies use modules of various sizes to capture CO2 for a variety of products. Global Thermostat’s first module was the size of a small building that it erected in 2010 at SRI International, a nonprofit research institute in Menlo Park, Calif.

In 2014, the company built a slightly larger version and connected it to the research institute’s natural gas-fired power plant, where it used waste heat to remove CO2 from the atmosphere and from the plant’s smokestack. The emissions were diluted with outside air, creating what Chichilnisky calls a "carburetor effect," enhancing the separation process.

So far, Global Thermostat has attracted eight large customers for its modules and the chemicals that make them work. They include Coca-Cola Co., which sees purified CO2 as a potential ingredient in beverages, and Saudi Arabian Oil Co., the world’s largest oil company.

The company also has a partnership with ACWA Power, a Saudi utility that operates a number of desalination plants in the Middle East. CO2 is an ingredient in one process to make drinkable water out of seawater.

Pointing out that nations emit an estimated 40 billion metric tons of CO2 into the atmosphere annually, Chichilnisky acknowledged that the effort to reduce these emissions will take "a few decades."

"We have to be improving the technologies to go toward lower costs and a higher level of activity," she said in the interview.

To that end, her company has a joint development agreement with Exxon to scale up the technology and a commercial agreement with Air Liquide SA, a French company that is a world leader in selling gases and gas-related technologies for industrial applications.

Global Thermostat is also working with two major German companies, Siemens Energy AG and Porsche AG. They are partnering with Exxon on a pilot project in the Magallanes province of Chile in an area that has unusually strong winds.

The idea is to use wind turbines (made by Siemens) to make electricity to split hydrogen out of water to make methanol, which Porsche says can be converted into "climate neutral" gasoline that it plans to test in racing vehicles and possibly in future sports cars.

Germany’s government is contributing to the project. Jeffrey Weir, a spokesman for Global Thermostat, says a final agreement among it and the two German companies is expected but hasn’t been signed yet. Weir noted that his company is the only U.S.-based entity involved in commercial efforts to remove carbon from air.

"We’re looking forward to the new [Biden] administration," he said, for help in supporting more international partnerships and efforts.

Germany’s interest in direct air capture has been heightened by the innovations of a third company: Zurich-based Climeworks AG, which was formed in 2009 by two German engineers who learned about capturing CO2 from the air while getting their doctorates in Switzerland.

Cristoph Gebald and Jan Wurzbacher developed their own version of the process in 2017 by extracting CO2 from the air using free waste heat from a small town incinerator. They purified it and sold it to a nearby greenhouse for growing cucumbers and tomatoes (Climatewire, Feb. 19, 2019).

Climeworks has grown to 130 employees and has 10 pilot projects underway. The biggest one is removing carbon from the air and using waste heat from a geothermal power plant near Reykjavík, Iceland. There, Climeworks is building a plant designed to bury 4,000 tons of CO2 each year.

It will be mixed with water and injected into an underground formation through a process where, over two years, it will be absorbed into stone. The facility, called Orca, features the company’s latest business innovation: soliciting donations from companies and individuals to pay for capturing and storing a certain amount of CO2 in their name, essentially forever.

"They get certificates," explained Wurzbacher, who says his company is working on a third-party certification that will provide a document to show that company X has permanently stored Y amount of CO2.

"They are pioneers, as we call them," he said. So far, there have been over 3,000 companies and individuals contributing from 54 countries.

Climeworks hopes to make a billion people aware that this can be done, but Wurzbacher conceded that "in the long term, if you want to remove a billion tons of CO2 from the air, you will need regulations."

This year, a fourth company has begun pursuing commercial ways to store carbon. It is an Ireland-based investment firm called Silicon Kingdom Holdings, and it has bought the rights to develop the "mechanical tree," the most recent product of Lackner, who pioneered the idea back in the 1990s.

He has since designed large mechanical columns containing CO2-absorbent material that can be extended as high as 32 feet. Lackner’s devices use no energy to capture CO2. Like real trees, they rely on the wind to deliver CO2. The gas is periodically removed from absorbent material and concentrated.

The machines are described as being a "thousand times" more efficient at storing CO2 than real trees. The company calls clusters of them "carbon farms." It says it expects to be deploying small modules initially and reach an annual capacity to capture up to 3.8 million tons of CO2 before the end of the decade.

Lackner and Arizona State University, where he now teaches, were both awarded shares in the Irish company. Its business plan predicts that scaling up the devices would drop carbon capture "comfortably below" $100 a metric ton.

While that may sound impressive, Lackner predicts that the ultimate way to rid the atmosphere of this enormous human-made burden will be a net-zero solution: a global system of enforcement using certificates showing that a given entity has already reduced emissions.

"The bottom line is if you want to put more CO2 into the atmosphere, you have to reduce it by a similar amount," he said.