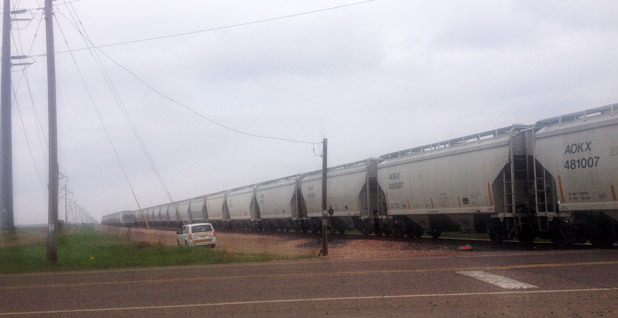 GREENFIELD, Wis. — Since the arrival of a mine that supplies sand to hydraulic fracturing sites in distant shale fields, this tiny township has gained a new dump, recycling center, snowplow and salt shed. Plans for a community garden are underway in a neighborhood across the street from the plant.

Perched atop a pair of railroad underpasses, Unimin Corp.’s Tunnel City silica extraction center last year began sending carloads of fine, white sand to energy producers in Pennsylvania, North Dakota and Texas. Under the terms of Unimin’s development contract, the company owes Greenfield 15 cents on the first million tons of sand it ships out of Tunnel City and 10 cents after that. In 2014, the mine’s first year of operation, Unimin paid out $222,019 to the community.

"For our township, it’s a gift from heaven," said Greenfield Clerk Susie Zillmer.

But those funds are tied to the sand mine’s performance. And while demand for proppant per individual well is on the rise, it won’t offset the drop-off in rig count and backlog of uncompleted wells spurred by declining oil prices, according to an April 25 note from Moody’s Investors Service. Those wells are likely to remain unfinished until the cost of completions drops or crude prices recover, the analysts found.

Wisconsin has 58 inactive sand extraction sites — a number almost equivalent to its 63 active mines, according to data from the state Department of Natural Resources. There is substantial interest in bringing more facilities online, but the oil price slump has made it difficult to get those projects off the ground, said Eric Bott, director of environmental and energy policy for Wisconsin Manufacturers & Commerce.

News of layoffs in the sand sphere has been minimal so far. Last month, U.S. Silica notified the state Department of Workforce Development that on July 15 it plans to let go of 30 workers at its Sparta, Wis., location. The company is also aiming to buy up some of the market share it expects will soon be vacated by shuttered mines — but that could take some time.

"I’m not sure that the full impact of the downturn has set in yet in people’s minds," U.S. Silica President and CEO Bryan Shinn told investors during the company’s first-quarter earnings call. "So it feels like the bid/ask spread is still a bit wide in terms of acquisitions, but there are a number of things that we have on the radar screen right now. And certainly, we’re working very diligently to see if we can help be a consolidator in this industry."

Firms can position themselves for success through the slump by placing their mines on railroads and building their wash plants on-site, said Wisconsin Industrial Sand Association President Rich Budinger. With the silica business’s latest phase of growth, companies have been taking advantage of state-of-the-art technology and environmental controls that improve efficiencies and save money.

"It’s all the economics and business model," Budinger said.

Because of its proprietary operating flexibilities and its proximity to rail, Unimin has been able to quickly respond to market changes. Over the course of its history, the company has rarely idled its plants, but there were times when it has had to lay off employees, said Steve Groening, regional vice president of operations.

Sand from Unimin and other Wisconsin mines has other applications — including in the production of glass, ceramics, paints and rubber — that help buffer the industry against economic shifts in the oil and gas business.

"If you walk into any room anywhere, you can’t put your hand on something that doesn’t have Unimin minerals in it," Groening said.

Ninety miles northwest of the Tunnel City mine, the city of Chippewa Falls is revitalizing its downtown with new Main Street construction, bridge improvements and a riverbank sprucing.

"It’s not as good as San Antonio," Texas native Charlie Walker, president and CEO of Chippewa County Economic Development Corp., said of the township’s riverwalk. "But you can see green space, walkability, pedestrians. We’re trying to make more of a sense of place so you can maintain the talent attraction and keep the younger people here."

All of those projects have been made possible by an influx of funds from industrial sand mining. A tax increment financing district around Chippewa Falls’ EOG Resources Inc. sand processing plant was valued last year at $68 million, generating approximately $1.5 million in revenue annually, according to City Planner Jayson Smith.

The industry’s prosperity is evident in the appearance of white and beige, sand-bearing railcars chugging through town. Years ago, Chippewa Falls’ railroads were so dilapidated that trains had to move through slowly and infrequently, Walker said. But over the past five years, multimillion-dollar rail investments across Wisconsin have brought the lines back to life (EnergyWire, June 17, 2013).

Chippewa Falls’ new business and infrastructure projects will be permanent local fixtures, regardless of the longevity of the sand business, Walker said.

"These are going to be around a long time," Walker said, indicating a cluster of new downtown buildings. "If, in the negative, the frac sand closes, these are still going to be here."

All told, sand mining is just a small part of Chippewa County’s economy. According to a 2014 report from the West Central Wisconsin Regional Planning Commission, manufacturing, the county’s largest industry, accounted for 24 percent of its gross regional product. Mining, quarrying and oil and gas extraction contributed 2 percent to the bottom line.

While western Wisconsin’s economic diversity could help buffer the region from the impact of energy’s boom-and-bust cycle, mining critics see those circumstances as an opportunity to bypass sand producers’ proposals and focus on other projects with fewer long-term effects.

An early analysis of the financial benefits of frac sand mining in Wood County, Wis., found that industry investments would amount to more than $86 million, support 616 new jobs and contribute $33.3 million in new earnings in the first year alone.

But studies like that don’t look at the costs of welcoming the sand industry into a community, according to another 2013 report on the economics of silica extraction.

"Mining has rarely laid the basis for sustained prosperity," says the paper, which was conducted by a consulting firm on behalf of Wisconsin agriculture groups. "Often, as in Appalachia or the Ozarks or the Upper Peninsula of Michigan or the Iron Range of Minnesota, mining has been synonymous with economic depression, high rates of unemployment and poverty, or simply ‘ghost towns.’"

Aside from uncertainty around extraction jobs and income, mines tend to be located in rural areas, giving them little connection with downtown economies. And the toll the industry takes on the landscape can translate not only to air and water pollution, but also to displacement of other economic activities, the study says.

Those industries — which include agriculture, farming, tourism and manufacturing — have a long history of providing financial support in Sand Country.

"Clearly there were economic forces supporting job, real income and population growth that lay outside land-based export activities," the report says. "Those positive economic forces need to be identified and focused upon when considering ways of protecting and enhancing local economic vitality."

The sand mining industry’s slowdown over the last several months is just a hint of things to come, said Thomas Power, an economics professor at the University of Montana and one of the lead authors of the report on the costs of sand mining.

"There’s every reason to believe that frac sand mining is going to follow the same cyclical path that mining almost anywhere in the U.S. over a century has followed," he said.