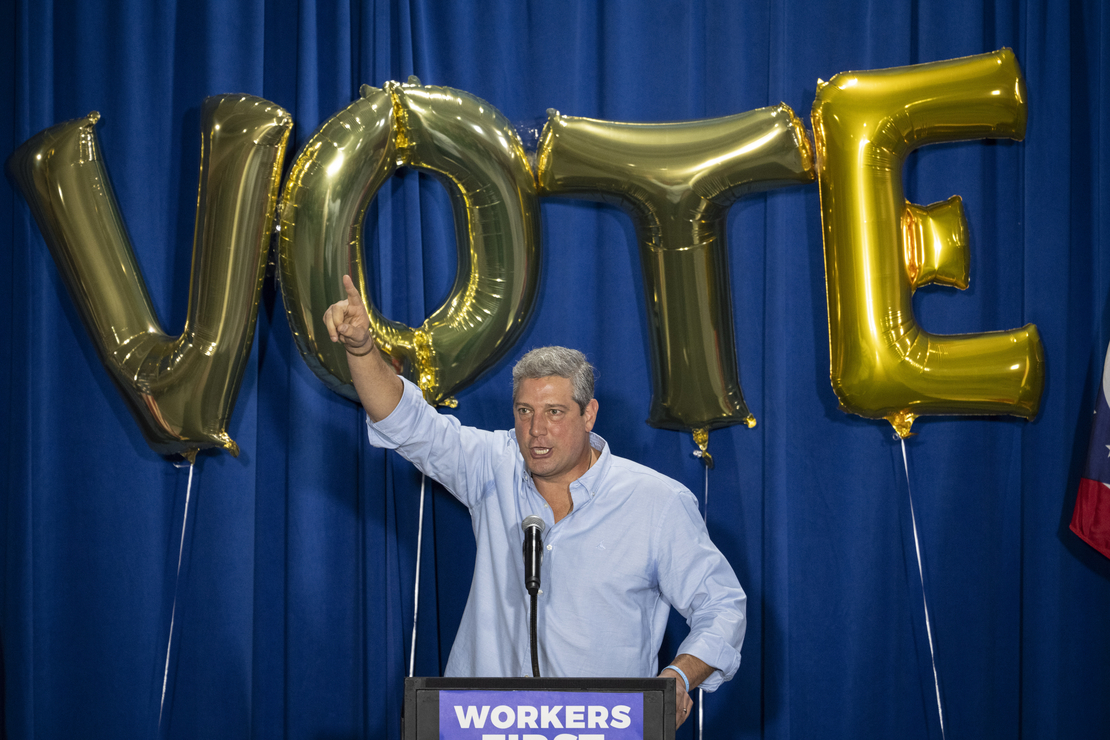 Democratic Rep. Tim Ryan, who is running for Senate in Ohio, is shown speaking at a Nov. 5 rally in Columbus. Drew Angerer/Getty Images

Republicans have spent millions of dollars on ads blasting Democrats on rising gas prices in the lead-up to Tuesday’s election.

But missing from most GOP attacks has been any mention of the Inflation Reduction Act and the roughly $370 billion it steers toward renewable energy subsidies and other climate programs. Republican ads largely have ignored Democrats’ landmark climate bill, according to political strategists from both parties and an E&E News review of campaign ad data from AdImpact.

“There’s not a single race where a Democrat is vulnerable because she or he voted for IRA or was pro-climate,” said Kevin Curtis, executive director of the NRDC Action Fund.

More than two dozen climate-friendly lawmakers lost that year, and many blamed their defeats on the cap-and-trade legislation, which passed the House in 2009 but died in the Senate. One loser that night was Democratic Rep. Rick Boucher, who had represented Virginia for 28 years in Congress. His opponent, Republican Morgan Griffith, ran ads that attacked Boucher for helping write the bill and accused him of killing jobs and driving up energy prices.

The focus this year is instead on inflation and, to a lesser extent, abortion and crime. Polls show voters are more likely to be unaware of Democrats’ legislative record than upset by it.

The result is a political muddle for both advocates and foes of climate action. Republicans, expecting to win at least a House majority, are already claiming a mandate to roll back climate policy in the name of lowering energy prices. But Democrats, looking at a climate bill that energized the progressive base without repelling moderate voters, see that as a winning fight.

“Unlike over a decade ago, where Democrats were hammered in TV ads across the country on a cap-and-trade bill that didn’t even pass — you’re not seeing anything like that this cycle,” said Jamal Raad, co-founder of Evergreen Action.

“An energy election and a climate election are two different things,” he said, because energy issues directly affect voters’ finances and lifestyle.

“Climate change is always a bottom-tier issue, which is why you see it [poll] 23rd out of 20 issues,” he said. “That’s not reflective of its importance, because people do think it’s important. … It’s just never a top-tier issue that rises above and is a differentiator.”

Republicans have been drilling the same energy message for months. After Democrats passed their climate bill, Republicans saw no need to change their tune. In fact, it was Democrats who wavered between bragging about boosting renewable energy and attacking oil companies for not drilling more.

Indeed, Democrats are at an inflection point in climate politics. They finally delivered on a potentially transformational climate bill that will meaningfully reduce emissions. Not only that, they passed that long-elusive priority through an evenly divided Congress.

The problem is, nobody knows about it. An Associated Press poll conducted last month found that 61 percent of adults know next to nothing about the Inflation Reduction Act. Similarly, a Data for Progress survey conducted in late October found that only 32 percent of voters are aware that the climate law contains tax credits for solar and wind energy.

That’s not just a national dynamic. It extends to state races, too.

Oregon’s three-way governor’s campaign has left Democrats worried that they might lose for the first time since 1982. Climate policy loomed large over the race — at least, in theory.

But voters have focused more on crime, inflation and homelessness than on climate programs, said Kevin Looper, an Oregon political consultant working for the Johnson campaign.

“Everybody thought, going in, that we’re gonna have a big debate about climate and energy,” he said. “And we haven’t had any debate about it.”

To be sure, environmental groups have spent millions of dollars this year on climate-focused political ads. Some of them are designed to sway voters, including in Wisconsin and Oregon’s gubernatorial races.

But often, climate has acted as a way to mobilize each party’s base and to raise campaign cash.

One of the candidates who most often run climate ads, according to Meta’s ad library, is Sen. Chuck Schumer (D-N.Y.). All but assured reelection this year, the majority leader’s climate ads tend to link to Democratic fundraising pages.

“To me, that’s proof positive that the folks running for election aren’t scared of this issue the way they were before,” Curtis said. “So in my bizarre world, we’re making progress. It’s not toxic anymore.”

Republicans have a different explanation for why they didn’t attack the Inflation Reduction Act: They didn’t need to. Biden’s standing on the economy could hardly be worse.

Since Biden’s first day in office, when he canceled the Keystone XL pipeline, Republicans have worked to link his climate policy to rising gas prices. That strategy has worked so well that Republicans are even competitive in the liberal Northeast, where the home heating season is just starting, said Doug Heye, a Republican strategist and former communications director for the Republican National Committee.

It doesn’t matter that U.S. energy prices reflect an international market that’s struggling under Russia’s war on Ukraine as well as other causes of global inflation, he said. That argument is lost on most voters.

“Fit that in a bumper sticker or a campaign ad,” Heye said.

Biden has worked to shift blame to oil companies, which have seen record profits in the last few quarters. He has repeatedly threatened to crack down on “Big Oil” price gouging.

“I think that’s wrong,” Ryan said, drawing raucous applause from the swing-state audience. “And I think we need to crack down on it.”