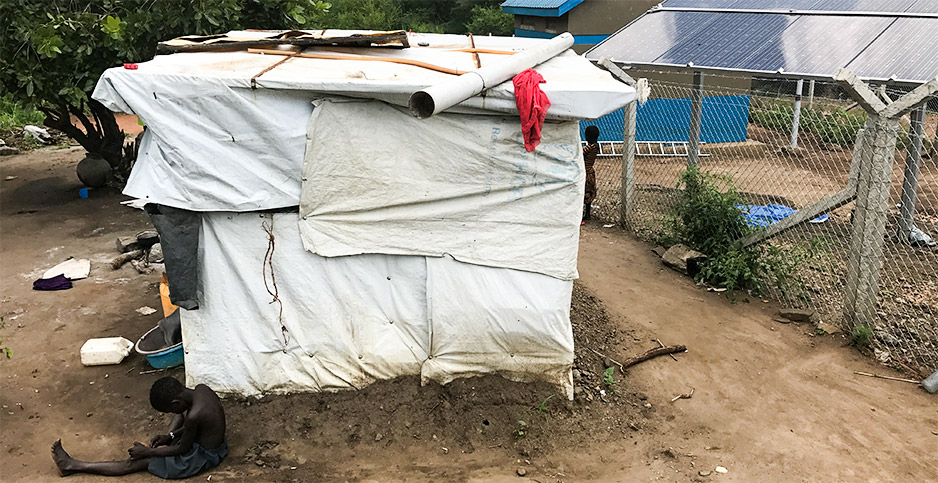 A boy sits near a shack adjacent to a solar-powered water pump at the Bidi Bidi Refugee Settlement in northern Uganda. Daniel Cusick/E&E News

YUMBE, Uganda — It isn’t hard to find solar in sub-Saharan Africa these days.

Pass through almost any roadside village, including this administrative hamlet near the border of Uganda and South Sudan, and dozens of small photovoltaic panels seem to sprout from roadside lots.

Most are pitched at angles against poles or rocks, converting the region’s equatorial rays into modest amounts of power — enough to charge a few cellphones or operate a TV or radio.

But at the sprawling Bidi Bidi Refugee Settlement just a few miles from here, solar is being deployed in a way that gives added meaning to what energy experts call the "transformative capacity" of renewable energy.

Water Mission, a South Carolina-based nonprofit committed to ending water scarcity in developing countries and crisis zones, has developed a way to harness solar power at scale to provide clean, safe drinking water to tens of thousands of war refugees who have streamed across the border from war-torn South Sudan.

"What we see as our unique value is that we’re a very technically focused organization. There’s a level of intentionality to the work we’re doing," said George Greene IV, Water Mission’s president and chief operating officer.

Founded in Charleston, S.C., in 2001, the group’s footprint has grown from Latin America, where it focused its early efforts, to Africa, Asia, the Middle East and South America. Recently, it shifted substantial resources to the hurricane-ravaged Caribbean.

At its most basic, Water Mission is an emergency response organization. It dispatches teams of engineers, hydrologists, public health experts and energy technicians to disaster and conflict zones, where they identify the best available water resources and then design and build systems to deliver safe water quickly, at the lowest possible cost.

It is also a Christian missionary group, motivated by a moral imperative to tend to the physical and spiritual needs of others. Yet the organization makes no religious claims on those who benefit from its work. Across sub-Saharan Africa, many of those receiving water from Water Mission projects are non-Christians.

As demand for its services has grown, Water Mission has also become a global leader in changing the way safe water is produced and delivered in crisis zones.

For example, governments and relief agencies have traditionally drilled dozens, or even hundreds, of bore holes across a wide area that are then serviced by hand pumps. Yet many of the small wells never produce water. For those that do, the water often flows inconsistently or the well runs dry from overuse.

Another practice still widely used in refugee settlements, including Bidi Bidi, is the deployment of tanker trucks that carry water from more distant supply sources to a central water distribution point.

But water trucking is fraught with downsides, including high costs for fuel and logistical challenges associated with hauling water over long distances on unsafe and often substandard roads. At distribution points, water trucks can draw long lines of people who often wait for hours to fill one or two 20-liter "jerrycans."

As far back as the early 2000s, Water Mission saw a niche for solving the water treatment and delivery conundrum in disaster zones and developing countries.

The vision was for a self-contained water system that could meet the needs of thousands using locally available water resources and energy from the sun to drive pumps, filters and chlorination systems. The result was what Water Mission calls a "Living Water Treatment System," or LWTS, more than 1,500 of which are now deployed throughout the world.

As demand grew for the technology, so did the need for scalability, especially as Water Mission began drawing interest from major relief organizations, including the U.N. High Commissioner for Refugees, the U.N. Children’s Fund and the International Organization for Migration.

Today these organizations are both promoters and funders of Water Mission projects, such as the solar water delivery system at Bidi Bidi.

Water Mission is also deploying a utility-scale solar pumping and treatment system at an emerging refugee settlement in western Tanzania, where hundreds of thousands of people are seeking shelter from violence in neighboring Burundi and the Democratic Republic of Congo.

Water Mission’s rising profile in the international relief community has also helped foster relationships with other organizations, donors and corporations that specialize in water systems and renewable energy.

Among its most important partners are the Danish water pump manufacturer Grundfos, which has delivered more than 1,000 pumps to Water Mission projects since 2008, and SolarWorld AG, the German renewable energy conglomerate with a major U.S. subsidiary in Hillsboro, Ore.

Earlier this year, SolarWorld’s executives committed to provide 1.2 megawatts of U.S.-made solar panels to the refugee camp in Tanzania, building on a relationship that began in 2010, when SolarWorld began sourcing Water Mission projects from its European plants.

Last summer, a shipment of 780 U.S.-manufactured SolarWorld panels — enough to produce 226 kilowatts of electricity — left the Port of Charleston for Tanzania, where they are being incorporated into water pumping and treatment projects for up to 250,000 refugees, officials said.