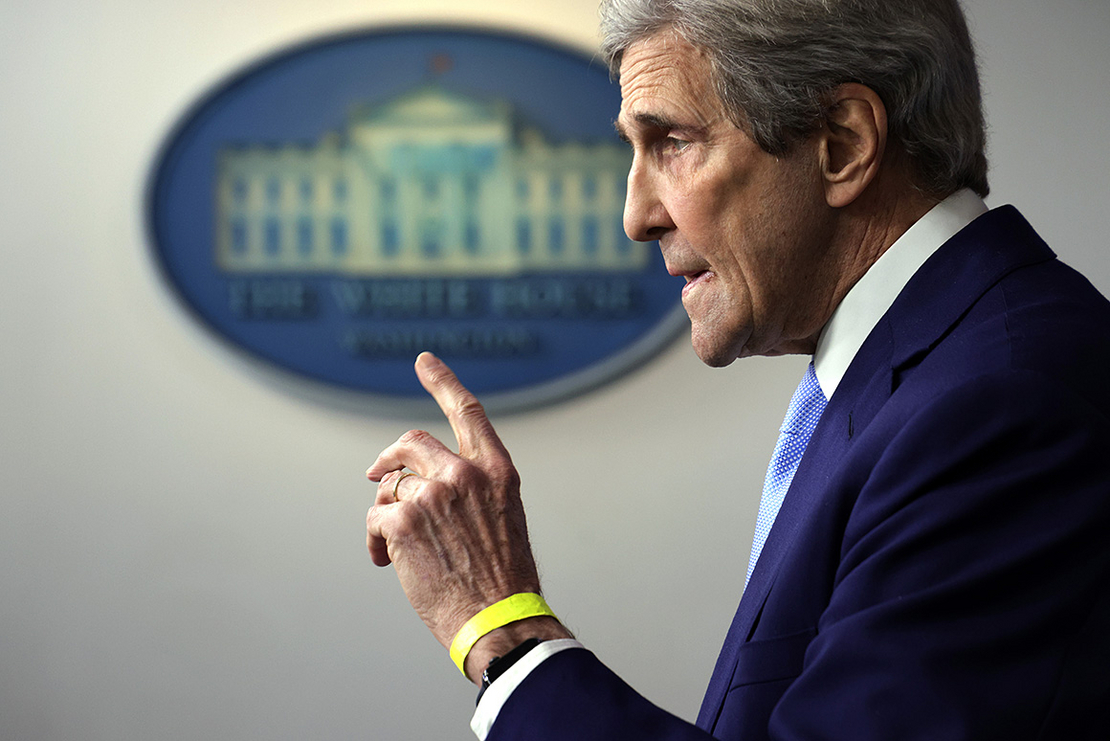 Climate envoy John Kerry speaks to the press in April. Administration officials have been inconsistent in their messaging ahead of global climate talks. Alex Wong/Getty Images

It’s "not essential" to pass legislation to achieve U.S. emissions targets, Kerry said this month. But one day earlier, he said it would be tantamount to withdrawing from the Paris climate agreement if Congress failed to pass the same bill.

White House officials are offering mixed messages as they race to manage expectations at home and abroad about the likelihood of passing historic climate legislation just days before President Biden travels to Glasgow, Scotland, to reassure the world that the U.S. is serious about tackling global warming.

“This happens all the time when you are trying to do something with domestic policy that has big foreign policy implications, because you have to speak to two audiences simultaneously but have different messages,” said David Victor, a public policy professor at the University of California, San Diego.

At home, the message is that without the climate provisions outlined in the Democrats’ sweeping social spending bill, Americans — and the world — will be in peril. Internationally, the message is meant to convey confidence that the U.S. will not show up at the climate talks empty-handed.

It can’t afford to.

Other countries have mostly welcomed the U.S. back to the world stage since Biden reentered the Paris climate agreement in January. In April he hosted a virtual climate summit where heads of state showcased their efforts to slow rising emissions ahead of Glasgow.

But the world knows that U.S. promises are fickle and prone to a divided legislature.

“A lot of U.S. credibility is on the line,” said Todd Eisenstadt, research director at American University’s Center for Environmental Policy.

If Biden goes to Glasgow without a convincing road map toward a carbon-free future, he said, “leaders of high-emitting countries are going to see that for what it is: a failure on the part of the U.S to unify behind stronger climate policy.”

The White House said Tuesday it is preparing to lay out its “range of tools” for cutting U.S. emissions in half by 2030 compared to 2005 levels (Climatewire, Oct. 27).

That’s one of the most ambitious goals among the world’s major climate polluters. But the U.S. will also need to bring other countries along, particularly China, which produces nearly 30 percent of current emissions.

With just days left before leaders meet in Glasgow, China and several other major economies have yet to submit new, enhanced targets to the United Nations climate body that oversees the negotiations.

U.S. leaders aren’t the only ones trying to manage expectations.

British Prime Minister Boris Johnson, who’s hosting this year’s talks, and the conference’s president designate, Alok Sharma, have both moderated their messages in recent weeks, as logistics around the summit have grown complicated and a persistent energy crunch has gripped much of Europe and Asia.

Sharma said more than 120 leaders are expected to attend, but key heads of state, including Chinese President Xi Jinping, have said they will stay home.

Speaking to a group of students in London on Monday, Johnson said he’s worried the summit “might go wrong” if countries fail to submit stronger commitments.

Meanwhile, ministers who worked on a plan to deliver a lapsed $100 billion in climate finance to developing countries said earlier this week that they were disappointed to find they would fall short (Climatewire, Oct. 26).

“What we want is for this COP to deliver,” Sharma told reporters Tuesday, referring to the Conference of the Parties to the U.N. Framework Convention on Climate Change. What that means, however, isn’t entirely clear.

To Victor, the public policy professor, one sign of success would be preventing the talks from breaking down as they did in Copenhagen in 2009. Negotiators at that climate conference did not adopt a formal agreement due to opposition from a number of countries.

“That failure really undermined the credibility of the climate change effort and forced thinking about new strategies,” said Victor.

Next came the 2015 Paris Agreement, which “set up the expectation for greater ambition over time,” said Kevin Book, who heads the research team at Clearview Energy Partners. It was also meant to be an ongoing process, which doesn’t align with Kerry’s last, best hope message, he said.

Rather than ask whether the process has fallen short of expectations, it may be better to question whether nations are confronting the reality of today’s geopolitics, said Book.

“If you’re the White House, what are you trying to do? I suppose the answer is stoke ambition and deliver success,” he said. “It may not actually be an inconsistency to say we’ve got to get started in a hurry, but we also need to stay the course for the long haul."