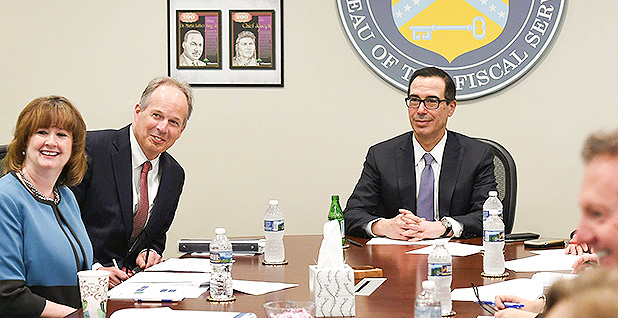 Treasury Secretary Steve Mnuchin is closing the agency's Energy and Infrastructure office. Department of the Treasury/Facebook

The Treasury Department has apparently pulled the plug on its Office of Environment and Energy as part of a broader reorganization.

A memo sent to the department’s international affairs staff yesterday and seen in part by E&E News announced that all environmental work would be reassigned to the international development section, which oversaw the portfolio before President George W. Bush’s Treasury secretary, Henry Paulson, created a separate office to raise the profile of environmental finance.

Treasury Secretary Steve Mnuchin’s move is not the first change the office has undergone since President Trump took office. A few months ago, it was renamed the Office of Energy and Infrastructure to better reflect Trump’s priorities.

The internal memo states that Energy and Infrastructure Deputy Assistant Secretary Mitchell Silk has been tapped to "bring his expertise on investment and infrastructure to investment."

Former heads of the Environment and Energy office under Bush and former President Obama decried the move as a demotion for environmental issues. The office represents the United States at board meetings of the U.N. Green Climate Fund and at Group of 20 finance minister summits. It also played a leading role in the Department of Energy Loan Guarantee Program and in aspects of U.S.-China bilateral cooperation.

"It’s too early to tell, but it’s not a good sign," said Leonardo Martinez-Diaz, a deputy assistant secretary under Obama who oversaw the office. While daily work to administer grants and other environmental objectives will continue after the environment staff moves to the International Development office, the loss of a separate office and dedicated deputy assistant secretary will cause an erosion of leadership, he said.

"There is the risk that we might retain the day-to-day, basic functions of government, but that we lose the additional element that really allows the U.S. to shape the rules and the processes," said Martinez-Diaz, who is now global director of the World Resources Institute’s Sustainable Finance Center.

He and two other past office heads, Billy Pizer and Matthew Kotchen, said the diminished clout for environmental finance at Treasury could make the department less attractive to specialized employees who may now see fewer opportunities for advancement. Meanwhile, environmental considerations might struggle for oxygen — and funding — in an office primarily concerned with development issues and headed by the deputy assistant secretary for international development.

"It diminishes the role of these issues at the Treasury Department," said Pizer, who served under Bush and Obama and is now a professor at the Nicholas Institute for Environmental Policy Solutions at Duke University.

"Energy and climate topics were right there at the meeting and infused how everyone thought about those issues, and without a high-level person at those meetings sharing that perspective, they’re just going to fall out," said Kotchen, who is now a professor at the Yale School of Forestry & Environmental Studies.

Trump was never expected to prioritize international environmental finance. He had already announced that the U.S. Treasury would not deliver the remaining $2 billion pledged to the Green Climate Fund, and his promise to leave the Paris Agreement in 2020 means that agency officials who attend U.N. climate summits are already sidelined. The same goes for the G-20 and other forums where Environment and Energy office personnel formerly played a central role.

The reorganization could spill into the next administration, Pizer said.

"I think the bigger issue down the road, if this office is not there, it’s going to take a big push at Treasury to create it again, and that might not happen," he said. "It took Secretary Paulson, whose passion was the environment … to put the effort into creating the office. So it’s not obvious that just because the administration changes down the road, that this office will come back."

The office also oversaw a host of other aid and spending programs, including the Global Environment Facility on the environment and sustainable development.