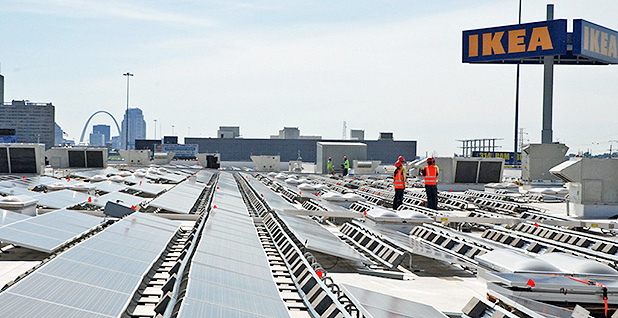 Ameren Missouri is proposing a pilot program under which it would install several utility-owned solar systems of 100 kilowatts to 2 megawatt on customer-owned properties. Unlike the 1.28-MW system at the St. Louis Ikea store (pictured), participating customers would donate host sites and wouldn't receive the energy, renewable credits or any lease payments. Photo courtesy of Inovateus Solar.

Missouri’s largest electric utility might soon be looking for a few good — and free — rooftops to host a series of new solar energy projects.

Ameren Missouri is waiting to see if state regulators will approve a novel pilot program that involves the utility owning and operating as many as five solar projects. The facilities would be 100 kilowatts to 2 megawatts in size and target commercial and industrial customers with available rooftop space or empty fields.

What makes the program different from similar endeavors by utilities elsewhere in the United States is that participating customers wouldn’t receive anything tangible in return for hosting them — not a share of the energy, not the renewable energy credits they produce or even lease payments.

What would they get? Bill Barbieri, Ameren Missouri’s director of renewable strategy, policy and generation, said participants would get an opportunity to help demonstrate the region’s commitment to clean energy and sustainability.

The Missouri Public Service Commission conducted a hearing on the proposed Solar Partnership Pilot. At issue there is whether to give Ameren blanket approval to pursue the projects at yet-to-be-determined sites.

Ameren said in its application and prepared testimony that it wants to complete at least one of the projects by the end of the year.

If approved, Ameren would be the latest investor-owned utility to get into the business of owning and operating distributed generation, a trend viewed with suspicion by some independent solar developers.

However, Ameren’s proposal has run into little opposition. In fact, a renewable energy advocacy group, Renew Missouri, is backing the pilot subject to minor modifications agreed to by the utility.

Wal-Mart Stores Inc., however, questioned whether the program would further development of distributed solar in Missouri if customers that host projects get nothing in return.

The retail giant, which operates dozens of stores and several distribution centers in Missouri, noted in its filing that its goal is to be 100 percent supplied by renewable energy and help drive production or procurement of 7 billion kilowatt-hours of renewable energy around the world by 2020.

"The solar partner receives very little, if any, tangible benefits," the company said in the filing. "Walmart is concerned that the structure [of the program] … will not lead to the ubiquitous roll out of distributed solar generation."

Despite its concerns, Wal-Mart said it recognized the program was a pilot and opted not to formally oppose it.

The opponent during Monday’s hearing was the Missouri Office of the Public Counsel, the state’s consumer advocate.

The Public Counsel’s office argued the PSC should reject the program because the utility doesn’t need any new generation, especially given the loss last year of its largest customer, a huge aluminum smelter that closed its doors and filed for bankruptcy protection.

And by waiting until 2019 to add solar capacity to meet the state’s renewable energy standard, Ameren could do so at a lower cost if current price trends continue, the Public Counsel’s office said.

Ameren, however, said the primary purpose of the pilot is to know more about how distributed generation projects would behave on its distribution grid.

While the utility’s customers have installed a total of about 55 megawatts of distributed solar, it’s all "behind the meter," meaning the company has little data from those sites available to help guide future solar investment decisions.

Barbieri said the utility wants to learn more about the value delivered by placing solar projects nearer to where energy demand is and better understand the optimal mix of different-sized projects on its system.

The idea for the pilot, he said, came from conversations with a couple of the utility’s large customers who raised the idea of hosting utility-owned projects. The customers, who haven’t been identified, were willing to offer up sites at no cost.

"What we’re trying to determine is the overall advantage of small-scale distributed generation," Barbieri said. "If we’ve got customers who are willing to offer us free property, why wouldn’t we do this?"

The solar pilot was proposed alongside another proposal to launch a community solar program. That program was approved by the PSC earlier this month.

Details of the plan call for Ameren to invest up to $10 million for 5 MW of solar to be constructed on customer-owned property under 25-year lease agreements. The utility would pay up to $2.20 per kW to install the solar facilities (the equivalent cost of constructing utility-scale solar), and the participating customer would fund any additional amount.

While the solar pilot program isn’t being pursued to help meet Missouri’s renewable energy standard, which requires 15 percent of retail sales come from renewable energy by 2021, the solar energy credits generated by the customer-hosted projects would ultimately be used for that purpose, Ameren said.

During Monday’s hearing, Barbieri said the program, including the benefit of the federal investment tax credit, would cost the average residential customer about 42 cents a year.

The proposed pilot and community solar programs represent two more small steps by Ameren to transition away from coal, still the dominant source of energy in its generating fleet.

In addition to paying out $100 million of rebates to customers who installed small solar projects and putting 100 kW of solar capacity on the roof of its downtown headquarters, Ameren also completed its first utility-scale solar facility in late 2014 — a 5.7-MW project just west of St. Louis.