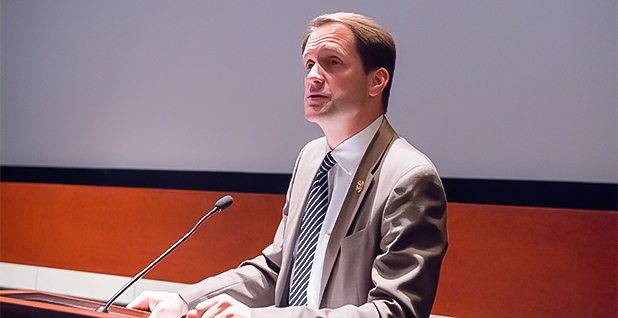 Moderate Democrats want the White House to know they’re interested in working on infrastructure, even as the congressional outlook dims for President Trump’s plan.

Members of the New Democrat Coalition yesterday huddled over lunch with D.J. Gribbin, a special assistant to the president who has been serving as the Trump administration’s point person on infrastructure.

Rep. Jim Himes (D-Conn.), the group’s chairman, said the group wanted to let the administration know it is open to negotiation, even if infrastructure looks more and more unlikely to get finished this year as the days tick by consumed by other issues.

The task looks especially difficult with the midterm elections tempting Democrats to reject every piece of Trump’s agenda. But Himes said he wants to go out on a political limb.

"All of us are conscious of the fact that we’re getting into primary season, and next thing you know we’ll be looking at November," he said. "But the reason we wanted to have this meeting was to tell the White House that we’re willing to take some political risks around an issue that is pretty essential to the country."

The White House has proposed spending $200 billion in federal money to leverage $1.5 trillion in total investment, an eye-popping number that many in both parties on Capitol Hill see as unrealistic.

Is a gas tax hike on the horizon?

The administration hasn’t said much about how it would pay for the federal piece. Himes said the New Democrats laid out some of their ideas at the meeting with Gribbin, including a potential hike for the federal gasoline tax and user fees on electric vehicles.

At least one member of Democratic leadership, too, has endorsed the idea of increasing the gas tax. House Minority Whip Steny Hoyer of Maryland said yesterday that he wants a hike, taking the opportunity to pan Republicans for passing a tax cut bill without a plan to pay for infrastructure.

"It’s very nice to say you’re for infrastructure or you’re for this, that or the other, but if you’re unwilling to provide revenue sources to accomplish that objective, it’s somewhat of an empty promise," Hoyer told reporters.

It would be difficult to get Republicans to go along with a gas tax hike, even if House Transportation and Infrastructure Chairman Bill Shuster (R-Pa.) and Trump have both endorsed the idea.

And both Himes and Hoyer acknowledged that the gas tax — which hasn’t been increased since 1993 — has its drawbacks.

But, he added, "Republicans have been more traditionally accepting of user fees as opposed to taxes."

He’s hoping to get a chance to make that pitch to Shuster. The group is looking to invite him to a similar lunch meeting in the coming weeks.

The group will also likely want to talk to Shuster about permitting, which will be a key area of compromise if Congress churns out an infrastructure bill this year. Among other things, the White House has proposed putting a two-year shot clock on reviews under the National Environmental Policy Act and making changes to the Clean Air and Clean Water acts.

The immediate next steps are clear, but some in Congress — like Sens. John Cornyn (R-Texas) and John Thune (R-S.D.), both members of leadership — are growing skeptical that anything will pass this year.

House Energy and Commerce Chairman Greg Walden (R-Ore.) said yesterday that lawmakers wouldn’t draw up much new legislative language. Rather, they plan to pull from bills that have already passed or those working their way through various committees with jurisdiction over infrastructure.

"We’ve been working on it from day one," Walden said.

On the Senate side, the Environment and Public Works Committee will hear from Transportation Secretary Elaine Chao on the infrastructure plan tomorrow.

EPW Committee ranking member Tom Carper (D-Del.) said he wants to focus on the permitting reform element of Trump’s plan and ask Chao why her agency hasn’t done more to implement the environmental streamlining provisions from the last two big infrastructure bills, the Fixing America’s Surface Transportation Act of 2015 and the Moving Ahead for Progress in the 21st Century Act of 2012.

As for congressional grumblings that there won’t be time to finish an infrastructure bill this year, Carper said he’s holding out hope.