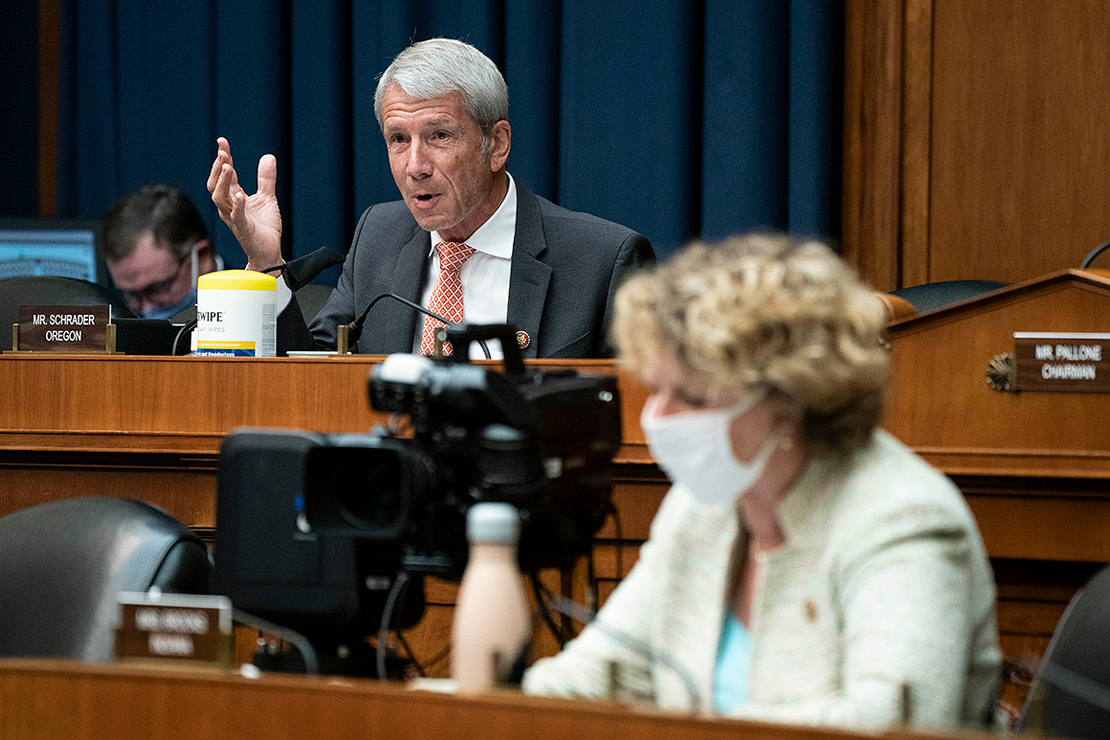 Moderate Democrats are standing with their colleagues as they call for aggressive climate change policies, a marked contrast from over a decade ago when a deeply divided party failed to deliver on a cap-and-trade proposal.

It’s a night-and-day situation compared with 2009-10, when squabbling sank what was known as the Waxman-Markey bill. Then, dozens of House Democrats defected from the bill over economic and jobs concerns, with lawmakers from fossil fuel states leading the way.

Now, the different wings of the party are, with a few exceptions, in agreement on the need for major climate measures in the $3.5 trillion budget reconciliation package they’re debating.

And while the caucus is far from united on other major questions on the budget bill — mainly whether the price is too high — the idea of unprecedented climate action enjoys broad support.

To observers, the contrast from cap and trade shows how much climate politics have changed in the last 12 years. In the years since, the world has seen increasingly dire climate impacts, and Americans have become used to big government spending.

“It’s remarkable how united the Democratic caucus has been on these extraordinary measures to fight climate change,” said Paul Bledsoe, a strategic adviser with the Progressive Policy Institute, who worked for the Senate Finance Committee in the 1990s when lawmakers tried, and failed, to institute a tax on energy to pay for environmental damages.

“It’s actually inspiring,” he said. “And it is not historically typical.”

The reconciliation measure is far from a certainty, as lawmakers battle over various provisions, including the environmental ones. Senate Energy and Natural Resources Committe Chair Joe Manchin (D-W.Va.), for one, wants a much smaller spending package (E&E Daily, Oct. 1).

Most moderates, however, are on board with various provisions, including massive new spending on clean energy and electric vehicles, and a Clean Electricity Performance Program that would incentivize electric utilities to reduce their greenhouse gas emissions.

“Climate change is, besides COVID, frankly, the biggest threat to Americans and the world at this point in time,” Rep. Kurt Schrader (D-Ore.) told E&E News. “That’s the one thing I probably could support, for sure, in a reconciliation bill,” he said of the climate-related provisions.

Schrader has issues with some of the bill’s specifics, like the particular structure of the CEPP. He opposed it in the Energy and Commerce Committee and has proposed an alternative clean energy standard. “But it does call for billions of dollars in innovation and technology, and I think that’s the key to bringing the country together,” he said of the full bill.

Other centrists who’ve shown support for at least part of the climate spending include Reps. Henry Cuellar (D-Texas) and Stephanie Murphy (D-Fla.), all of whom belong to the moderate Blue Dog Coalition.

They wrote to Speaker Nancy Pelosi (D-Calif.) last month, saying climate spending in the bill does not have to be offset because official cost estimates for the legislation “do not adequately account for the future costs associated with inaction on the climate crisis.”

Sen. Kyrsten Sinema (D-Ariz.) told the Arizona Republic she was “looking forward” to addressing climate in the legislation, while Rep. Josh Gottheimer (D-N.J.) promoted the climate parts of the bill in a “PBS Newshour” interview.

Pelosi held a news conference last month with some of the caucus’ most vulnerable Democrats in next year’s midterm to back the climate spending.

“When we see our glaciers melting and our rivers drying up, when we see hurricanes and tornadoes and flooding, wildfires across this country like we’ve never seen, to think that not every single member of Congress is on board to address this, right now, today, is hard for me to understand,” Rep. Mikie Sherrill (D-N.J.) said at the event. “Because in New Jersey, this is a bipartisan issue.”

It was a very different picture in 2009, when Pelosi had the House vote on the American Clean Energy and Security Act, sponsored by then-Reps. Henry Waxman (D-Calif.) and Ed Markey (D-Mass.).

The cap-and-trade bill scared off numerous moderate Democrats, who felt that it was inappropriate at a time when the economy was still recovering from the Great Recession. Democrats representing fossil-fuel-heavy areas objected even more strongly.

The bill passed the House, but with 44 Democrats voting against it. The initiative died the next year when the Senate gave up on trying to formulate its own cap-and-trade legislation.

Then, in the 2010 midterms, Democrats lost a net of 63 seats, the largest partisan shift in the House in a half century. The cap-and-trade vote is thought to have contributed to the loss, along with the Affordable Care Act, the American Recovery and Reinvestment Act, and general disdain for big government spending.

“While everybody was worried about the economy, I’m afraid the public understood the cap-and-trade vote to mean Democrats didn’t understand what’s going on with jobs, and they were pursuing an agenda that placed more jobs at risks,” said Earl Pomeroy, who represented North Dakota as a Democrat from 1993 until losing in 2010. He voted against the Waxman-Markey bill, but believes that it fed into the anger among voters who defeated him.

But this time around is different, Pomeroy said. “We’ve got decade worth of proof that something’s going on with the climate,” he told E&E News.

“Secondly, the actions do not present substantial costs to the public, either in terms of energy costs or unacceptable hits to major productive industries, like manufacturing,” he said of the climate measures in the reconciliation proposal.

Former Democratic Rep. Jason Altmire, who lost his western Pennsylvania seat in 2010 after also voting against cap and trade, said the politics surrounding climate change have changed dramatically since then.

“When cap and trade came up, there was still a very strong political headwind for running into the climate change issue, if you represented a region like western Pennsylvania,” Altmire said.

“Today, that’s not the case. There are still some deniers, of course, but they’re very much more on the fringe than they were when cap and trade was talked about.”

Altmire chalks that up to a few factors, including what he sees as a general leftward shift in politics among voters and the acceptance of big spending by Congress, particularly after the various COVID-19 relief bills.

“It makes it a lot easier for even moderate Democrats, representing areas where fossil fuels have been part of the culture and political dynamics for decades,” he said, adding that even his former constituents appear to be more supportive of a future without fossil fuels.

The politics of the reconciliation package are also decidedly different than the politics of Waxman-Markey, a discrete climate bill centered on one issue area.

For one thing, the narrow margins in the House today may put pressure on moderates to support the president’s agenda, lest they face a primary challenge supported by top figures in the Democratic Party.

With just a few votes to spare, “defection is tantamount to utter defeat of the legislation,” said Barry Rabe, a professor of environmental policy at the University of Michigan.

In 2009, Rabe noted, Democrats considered the Affordable Care Act and Waxman-Markey as separate bills, with separate political dividing lines. Now, climate and health policy are stapled together into a massive reconciliation bill of virtually unprecedented scale.

That could insulate climate policy from the kind of specific attacks Republicans have lobbed against the Affordable Care Act for years. But it could also create a “Solyndra on steroids” scenario, Rabe said, where the public’s view of the entire reconciliation package could falter if one policy area is seen as wasteful.

“We don’t have a history in the U.S. of putting environmental policy adoption into a package with lots of other social programs that are spending lots of money but also engaging in regulation,” Rabe said.

“For the U.S., I would argue, this becomes a really unique political test about whether there is an advantage to be gained by formally linking environment and energy with all kinds of other policy areas.”

Rep. Jared Huffman (D-Calif.), a progressive who wasn’t in Congress at the time of the cap-and-trade bill, said moderates shouldn’t worry about a replay of the 2009 vote and the midterm election.

Progressive climate activists have been working for months to send that message to moderates. Those lawmakers and their voters have been the focus of millions of dollars of spending on advertising and organizing in support of the reconciliation package (Energywire, Sept. 14).

Data for Progress and Climate Power published poll data recently showing at least plurality support for both the idea of additional climate-related spending and the $3.5 trillion reconciliation plan in eight districts represented by vulnerable Democrats.

“Lawmakers representing these voters should feel confident supporting President Biden’s agenda knowing that their voters widely back these measures and want their leaders to take action on climate change,” Data for Progress said in summarizing the findings.