Moniz’s next act: Going to bat for a low-carbon economy 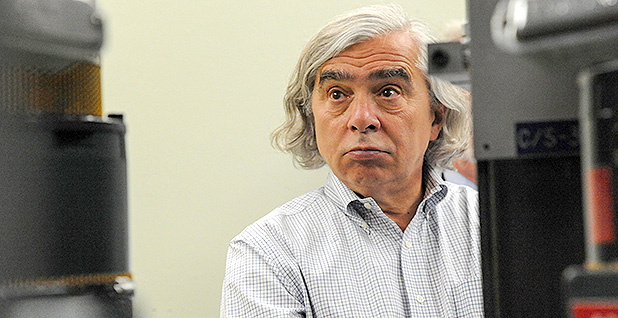 Former Energy Secretary Ernest Moniz, who won rare bipartisan support in Congress for some of the Obama administration’s energy agenda, is headed back into Washington’s policy and persuasion arena to battle for the rest of it.

Moniz is launching a research think tank and advisory firm, Energy Futures Initiative, that seeks to make a compelling case for low-carbon power and for innovation in energy systems that create jobs and security. It shapes up as a head-on challenge to President Trump’s clean energy and climate positions.

In EFI, Moniz has reassembled a familiar team, with Melanie Kenderdine and Joseph Hezir. Both are colleagues from the Massachusetts Institute of Technology Energy Initiative, the academic research project he led before joining Obama’s Cabinet in 2013. After taking the helm at DOE, Moniz recruited them both to join him. Moniz is scheduled to outline his new venture today at the National Press Club.

"Our special role will be really hard-nosed analysis on key issues for the energy innovation, climate and energy security," Moniz said in an interview with E&E News.

EFI will have a board of advisers, whose chairman will be John Browne, executive chairman of L1 Energy, a global investment firm, and former CEO of BP PLC. An EFI research team of associates includes Ellen Williams, the former chief scientist at BP and former head of the Advanced Research Projects Agency-Energy, a catalyst for DOE investment in smart grid and clean energy technologies under Moniz.

Key policy directions that Moniz advocates are already spelled out in two voluminous DOE reports, the Quadrennial Energy Review issued in 2015 and in January of this year. The first focused on the U.S. energy sector’s transmission, storage and distribution infrastructure. The second covered challenges facing the nation’s electricity networks. The reports might have been an energy blueprint for a Hillary Clinton presidency but instead are a kind of manifesto for the Obama DOE in exile.

"We hope we’re going to be picking up major parts of that [QER] agenda in the evolution of the electricity system," Moniz said.

Two actions by the Trump administration have injected urgency into Moniz’s venture, he said. The first was the decision to pull the United States out of the Paris Agreement on climate change, one of Moniz’s top priorities at DOE. The second is the Trump administration’s first budget submission to Congress, which proposed a $3.1 billion, 18 percent reduction in DOE’s budget outside of the nuclear security programs. Funding for renewable power, energy efficiency and advanced research projects would be particularly hard hit or eliminated.

"While Paris is a very important step on the road to deep decarbonization, we’re going to have [to cut] a lot more emissions after the Paris time horizon goes by," Moniz said. That requires long-term commitments to innovation, he said.

“I do think the Paris Agreement rejection does have other kinds of consequences, like being one more straw on the camel’s back — maybe a bale on the camel’s back — for the uncertainty created among our allies and friends about our reliability on all kinds of long-standing commitments — NATO, trade, you name it. And I do think the American leadership will be missed on the global scene.”

"A lack of federal government support obviously makes things harder and slows some things down," Moniz said of his innovation prescriptions. "But we’re going to a low-carbon economy. That’s not going to change.

"We will be looking to work with mayors, governors, business leaders, university leaders [who] have come out very, very strongly that we are not going to be deflected from staying on the road to the Paris objectives," and from there, "the deep, deep decarbonization needs beyond the Paris time frame," he said.

"We’re going to get there. There are lot of reasons to think the momentum will be to a significant extent sustained," Moniz said. He said he doesn’t believe Congress will endorse Trump’s DOE budget, which has taken fire from some leading Republicans and Democrats. But without federal leadership and consistent DOE program funding, "there will be a gap that will have to be covered somehow."

One of the achievements from the Paris meeting was the Mission Innovation agreement among the United States and 21 other nations to increase investments in clean energy research, Moniz noted. The U.S. goal was to double its investment to $12.8 billion in 2021. The Trump budget would cut current spending in half, ceding leadership on this front to China and Europe before long, he added.

"I do think the Paris Agreement rejection does have other kinds of consequences, like being one more straw on the camel’s back — maybe a bale on the camel’s back — for the uncertainty created among our allies and friends about our reliability on all kinds of long-standing commitments — NATO, trade, you name it. And I do think the American leadership will be missed on the global scene.

"You can’t be Pollyanna-ish. There is no way to say there isn’t bit of a wrench in the works. We will lose some ground," Moniz said. "It’s going to make it more expensive and harder to get back on the track. … I believe we will do that, and this is just going to cost us some edge in innovation."

Moniz’s belief in the ability of analysis to affect Washington is a personal conviction, he told an MIT interviewer recently. "God gave you one mouth and two ears for a reason, as opposed to the reverse. So you should use all of those instruments in that proportion. It’s very important to listen and understand the positions, whether they’re Democrats or Republicans. It doesn’t mean you respond in ways necessarily that they like, but it really helps so that you can understand where they’re coming from, and where you might be able to find compromise."

Moniz said the new venture "is not a lobbying organization. We are an analysis organization," he told E&E News. "We will be happy to walk basically any relevant constituency through the kinds of findings and recommendations we’ve come up with based on analysis.

"We are going to push for funding for projects we want to do, and then try to put together the appropriate funding coalition on a project basis.

"We’ve put together a very extensive network of distinguished advisers. … Our model would be to put together project teams drawn from this network, plus ourselves.

"This is all contingent, of course, on raising the funds to support the projects," he said, which could come from foundations, companies or individuals.

The full of test of Moniz’s impact may be whether he can capitalize on relationships he built in Congress now that he is an academic and private citizen once again.

He was saluted by members from both sides at his final appearance before the House Energy and Commerce Subcommittee on Energy and Power on Sept. 15. Rep. Bobby Rush (D-Ill.) introduced him as a "rock star."

Rep. Joe Barton (R-Texas) said he was surprised and impressed that Moniz had volunteered to testify before the committee. He couldn’t remember the last time a Cabinet secretary had done that, he said. "Usually, we got to drag you guys kicking and screaming and threatening and all kinds of stuff.

"So you just said, ‘Hey, I want to come by and visit,’ and we dropped everything we’re doing so we could hear you,’" Barton said with a grin.

In his prior role at DOE, Moniz came to members of Congress carrying DOE’s nearly $29 billion portfolio with all it could do.

"It’s in central Appalachia in the coal fields. They have mountains, trees and lots of good people, and not a whole lot else. That visit was particularly important for the students there in Dickinson County because your team made it clear that there are possibilities in science that can affect the coal industry positively. I think that speaks highly of the work that you’re doing."

"I want to close by saying thank you so very much for your patience, your expertise and your frankness. In Texas, we say you’re a straight shooter. That’s a very high compliment."