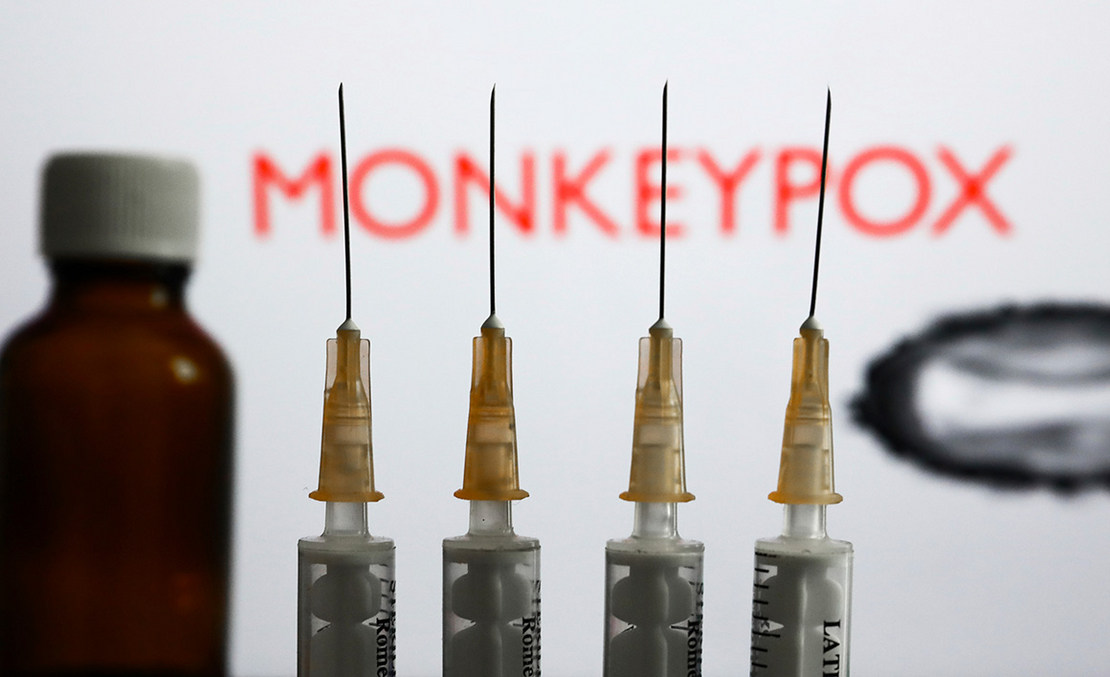 Medical syringes and a bottle are seen with a "Monkeypox" sign. EPA has released a list of disinfectants that can be used against the virus. Jakub Porzycki/NurPhoto via AP

Regulators are responding swiftly amid concerns about the spread of another virus in a country still battling a deadly pandemic.

In an announcement yesterday, EPA said it has triggered its emerging viral pathogen (EVP) guidance as recent cases of monkeypox tick upward in the United States. That limited procedure will allow for manufacturers to advertise their products as effective against the virus to health care facilities and officials, among other notable decisionmakers.

Like in the fight against Covid-19, the agency hopes to jump-start efforts to contain the virus if things should spiral.

“When rare or novel viruses cause outbreaks of disease, there may be few if any disinfectants that have been tested and registered for use against that specific pathogen,” the agency said in a statement.

In order to prepare for those instances, EPA has mechanisms in place to speed up a process that can otherwise be lengthy. When triggered for a specific virus, the EVP guidance allows manufacturers with pre-qualified products to make the claim that those disinfectants are potentially effective against the infectious agent.

The policy does not allow for registrants to add a label to a product themselves. But it does enable them to include a statement attesting to EPA’s sign-off in a variety of instances as companies provide technical literature to facilities like hospitals, along with avenues like social media.

“While there are no disinfectants registered for use against monkeypox, all products with EVP claims have been tested against viruses that are more difficult to kill than monkeypox,” EPA said.

EPA’s moves reflect growing national fears that another disease outbreak may be on the rise. Typically confined to West and Central Africa, monkeypox is a rare virus that has begun to spread rapidly in recent weeks, alarming public health officials. Officials in Europe, North America, Israel and Australia have reported hundreds of monkeypox cases, with the virus now in seven U.S. states as of yesterday, including California, Florida, Massachusetts, New York, Utah, Virginia and Washington.

Unlike Covid-19, monkeypox is not a new virus, with the first human infection having occurred in 1970. Belonging to the same family as smallpox, the virus jumps from animals like rodents to people, typically yielding limited outbreaks. It is known to spread through close personal contact, often involving skin-to-skin touch but also through bodily fluids, respiratory droplets and contaminated materials, according to the World Health Organization. Signs of the disease can include fever and chills, along with aches and fatigue early on, with rashes developing on the face and genitals in more advanced cases as lesions break out. Symptoms typically arrive within a week or two after exposure, and a person can remain contagious for several additional weeks.

Monkeypox does not typically require hospitalization, and fatality rates are low. But they can be higher in children, pregnant people and those who are immunocompromised. One West African clade (or grouping) of the virus has had a case fatality rate of 3.6 percent, while a clade from the Congo Basin has a 10.6 percent fatality rate. At present, the West African clade is the one currently appearing on polymerase chain reaction, or PCR, tests.

The recent outbreak has alarmed public health officials largely because of how quickly a heretofore contained virus has jumped borders and caused a significant uptick in cases. But U.S. officials are encouraging precautions and awareness rather than panic, emphasizing that monkeypox is unlikely to yield anything remotely close to the coronavirus pandemic. Vaccines for smallpox and monkeypox prevention exist, and experts are already familiar with the disease and how to address it.

Still, regulators are eager to ensure that the outbreak does not grow to significant levels, leading to yesterday’s disinfectant announcement from EPA, one likely to be cheered by industry members.

The environmental law firm Beveridge & Diamond said in a statement that, like Covid-19, monkeypox is an “enveloped” virus, a type that is more susceptible to disinfectants than other viruses because its outer layers can be punctured, preventing its contents from being transmitted.

The announcement may also lead to questions from groups that have raised eyebrows before at consumer reliance on disinfectants, which often come laden with a range of chemicals. Under the Trump administration, EPA rushed to approve disinfectants to counter Covid-19. Advocates repeatedly questioned that trend and the possible impacts of introducing potentially toxic substances into environments already vulnerable to disease (Greenwire, April 13, 2021).

In one more extreme instance, the Trump EPA touted a disinfectant used by American Airlines in Texas to ward off Covid-19. After President Joe Biden took office, EPA quickly dumped that approval, finding the disinfectant manufacturer to be in violation of federal regulations (Greenwire, July 9, 2021).