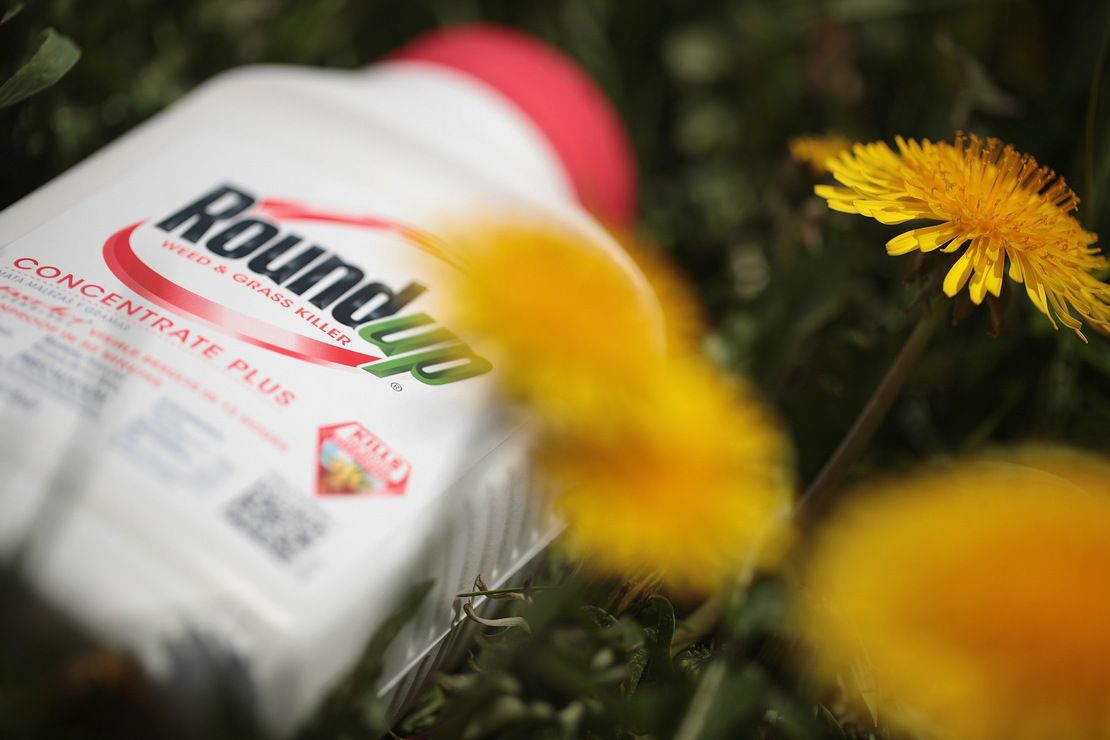 Monsanto Co. has asked the Supreme Court to reverse a ruling that affirmed a $25 million jury verdict against its Roundup weedkiller. Scott Olson/Getty Images

The Supreme Court could decide this week whether to take up a legal battle that has the potential to upend a watershed victory by a California landowner against the manufacturer of a popular weedkiller.

Monsanto Co.’s petition — should the Supreme Court choose to take it — would throw into question the future of a $25 million verdict a jury awarded to Edwin Hardeman, who was diagnosed with non-Hodgkin lymphoma after years of using Roundup on his San Francisco Bay Area property, as well as potentially billions more in settlements.

Hardeman’s verdict, which was affirmed this year by the 9th U.S. Circuit Court of Appeals, was the test case for thousands of trials over the harm posed by glyphosate, the key ingredient in Roundup.

Monsanto wrote in its petition for Supreme Court review that the justices should not allow the 9th Circuit’s decision to govern that massive body of consolidated cases.

“Because important federal questions related to Roundup and non-Hodgkin’s lymphoma that would otherwise be tested in different courts nationwide are instead being resolved solely in a single district, this Court should not wait to grant review,” Monsanto wrote.

Monsanto v. Hardeman is one of thousands of petitions that make their way to the Supreme Court each year. The justices grant just a tiny fraction of the petitions they receive.

The petition is scheduled for discussion during the justices’ conference tomorrow. They could announce a decision by early next week on whether they will hear the case.

Monsanto’s argument hangs on a provision of the Federal Insecticide, Fungicide and Rodenticide Act that the company argues preempts — or blocks — litigants like Hardeman from raising failure-to-warn claims under state law (Greenwire, Aug. 17).

If the Supreme Court were to take the case and reach a ruling in Monsanto’s favor, the company could use it to try to dismiss claims by Hardeman and millions of others — claims Monsanto this year tried to settle to the tune of $2 billion before a federal judge deemed the company’s efforts insufficient (Greenwire, May 27).

“Everybody’s holding their breath seeing what will happen,” said Leslie Brueckner, a senior attorney at Public Justice, who was brought on to Hardeman’s legal team during the 9th Circuit battle.

When Bayer AG acquired Monsanto in 2018, it inherited a mountain of legal challenges stemming from Monsanto’s production of chemicals like glyphosate and Agent Orange, a toxic herbicide that was used by the U.S. military during the Vietnam War to decimate jungle foliage and expose enemy fighters.

Bayer referred to earlier statements on its Supreme Court strategy when asked for comment for this story.

Earlier this year, Bayer laid out a five-point plan for addressing Monsanto’s Roundup legal saga. If the Supreme Court does not grant review, Bayer said, the company will set up a claims program to assist Roundup users who later develop cancer.

In the meantime, Bayer has set aside $4.5 billion to address Roundup litigation, bringing its total estimated cost of dealing with Monsanto’s legal mess to $16 billion. The company said it will also discuss Roundup labels with EPA and phase out glyphosate in its lawn and garden products starting in 2023.

Glyphosate formulations will still be available in U.S. professional and agricultural markets, Bayer said. Monsanto has a patented line of “Roundup Ready” crop seeds that have been genetically modified to resist glyphosate.

“We want to provide comfort to our investors that the glyphosate litigation exposure should now be reasonably accounted for and leaves significant upside in the event of a favorable Supreme Court decision on the case,” Bayer CEO Werner Baumann said during an investor call this summer.

The company has argued in its Supreme Court petition that the 9th Circuit’s decision to affirm Hardeman’s jury verdict departs from legal precedent on FIFRA preemption and expert testimony.

“I see Monsanto’s petition as a Hail Mary pass,” said Brueckner, the attorney for Hardeman. “I think Monsanto knows the chances of review are slim, but the company decided to give it a shot.”

For about 30 years, Edwin Hardeman had used Roundup to kill poison oak encroaching on his Sonoma County property.

Hardeman was eventually diagnosed with non-Hodgkin lymphoma, a type of cancer that affects the lymphatic system, inhibiting the body’s ability to circulate fluids and fight off disease. While the cancer can be fatal, it is often treatable and curable. Hardeman’s cancer is now in remission.

Although his attorneys say he was skeptical that anything would come of the case, Hardeman sought the advice of lawyers and launched a lawsuit against Monsanto in 2016. His challenge was later selected as the bellwether — or test — trial in multidistrict litigation in federal court in California, making him the face of a massive legal battle over Monsanto’s responsibility to warn consumers about the risks of using glyphosate-based products.

“He’s as surprised as anybody that we are where we are now,” said David Wool, a partner at the firm Andrus Wagstaff who has represented Hardeman since the start of his case, in an Oct. 6 podcast by Public Justice.

Hardeman rarely speaks to the media and declined to comment for this story.

In their reply to Monsanto’s Supreme Court petition, Hardeman’s lawyers told the justices that the case is not worth their limited time (E&E News PM, Nov. 4).

They wrote that the company’s plea “rests on misstatements of law and misrepresentations of the record.”

In its petition, Monsanto wrote that under FIFRA, a state may not require a warning on a product when EPA has concluded that a label is not appropriate.

But Hardeman’s attorneys wrote in their response that Bates — which said Texas peanut farmers could sue for damages caused by a Dow herbicide — does not preclude state misbranding standards, like California’s in the Roundup case, that are similar to or narrower than federal requirements.

In 2019, EPA said it would no longer approve product labels stating that glyphosate is known to cause cancer and criticized a 2015 report by the International Agency for Research on Cancer classifying the chemical as “probably carcinogenic.” During the first week of Biden’s presidency, the agency issued an interim decision to re-register glyphosate, finding that the chemical poses no "risks of concern" to human health when used according to current product labels.

But EPA, Hardeman’s legal team wrote in its response, has also acknowledged the need for more data on the risks of glyphosate mixed with surfactants that help products like Roundup spread out on and penetrate leaves — and skin.

"To this day, EPA still has not reached any conclusions as to the carcinogenicity of glyphosate-based formulations like Roundup," Hardeman’s attorneys wrote.

Monsanto wrote in its response to the Hardeman team’s arguments that “there is no meaningful distinction” between glyphosate and Roundup for the purposes of the litigation.

When asked for comment on this story, EPA — which is not party to Monsanto v. Hardeman — referred to its previous findings on glyphosate.

In evaluating the potential cancer risks from glyphosate, EPA said it has relied on studies evaluating exposures to pesticide products containing glyphosate, rather than the chemical alone.

Groups like the Chamber of Commerce have weighed in to back Monsanto’s position to the Supreme Court.

In a friend of the court brief, lawyers for the chamber wrote that the 9th Circuit’s decision had created uncertainty for the regulated community.

One section of the chamber’s brief supported Monsanto’s position that the 9th Circuit adopted too lenient a standard when examining the expert testimony that the trial court admitted in the Hardeman case.

“Because expert testimony can have such a disproportionate influence on juries, the admission of unreliable expert testimony often imposes hydraulic pressure on the rest of the litigation,” lawyers for the chamber wrote. “Defendants that confront adverse expert rulings are often compelled to settle, rather than take their chances with a jury, even when there are real doubts about the science involved.”

Hardeman’s lawyers pushed back against Monsanto’s evidentiary arguments in their response. The 9th Circuit previously rejected the company’s evidentiary claim on the grounds that the jury would have reached the same conclusion in Hardeman’s favor, even in the absence of potentially erroneous information.

No parties have filed amicus briefs with the Supreme Court in favor of Hardeman’s team, which had initially attempted to waive its own response. But amicus briefs from lower court proceedings illustrate widespread concern about Roundup’s risks for vulnerable groups like farmworkers.

Many farm laborers were born outside the United States and pull in annual incomes that put their families below the poverty line, the California Rural Legal Assistance Foundation, the Farmworker Association of Florida and other groups wrote in a 9th Circuit filing.

They said labels are a “vital tool” for minimizing potential harm from chemicals like glyphosate to at-risk populations.

“Although labels are by no means sufficient to protect farmworkers from every pesticide-related illness, farmworkers with access to adequate labels are more likely to be aware of the risks they and their families face as a result of pesticide exposure,” the groups wrote.

“All eyes were on what happened in Hardeman,” she said. “When the jury came back with the verdict, it suddenly meant victims would have a path to justice.”

While Roundup users may have other avenues to legal victories available to them, Brueckner said, a Supreme Court grant and ruling in Monsanto’s favor would wipe out a major hook for courtroom challenges.

“Our plan is to stop it from doing that,” she said. “That’s our hope, anyway.”