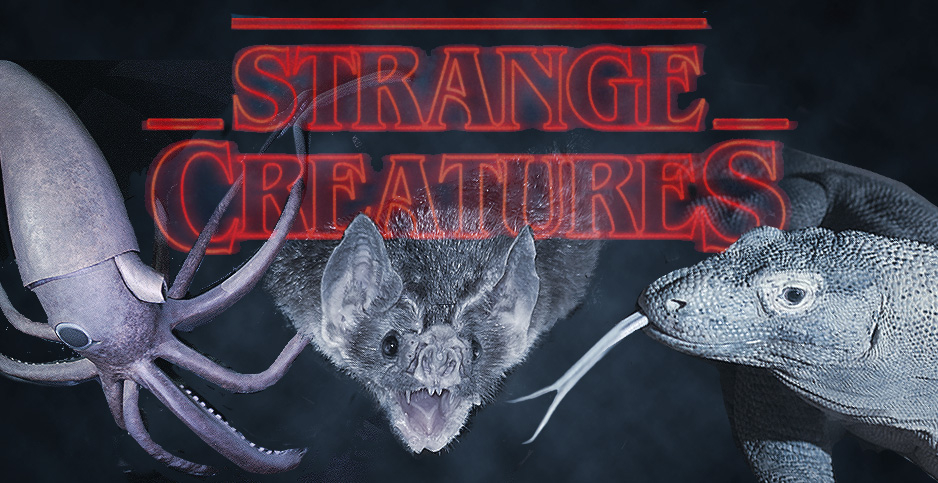 Haunting the deep seas, dark jungles and night skies isn’t as easy as it used to be.

Higher temperatures are bringing big changes to the world’s ecosystems. And even the most frightful beasts could suffer.

As the World Wildlife Fund warns that animal populations have declined 60 percent since 1970, scientists are trying to pierce the veil of mystery that shrouds some of the world’s scariest creatures. Big questions remain about how some of them perform basic functions — let alone how they might suffer, or thrive, under climate change.

But even where science bumps into myth, monster specialists expect climate change to bring nothing good.

The world’s biggest lizard has a tiny home, and it’s getting smaller.

Wild Komodo dragons only live on five small islands in Indonesia. A national park protects some of their range, but people live nearby. It’s not unusual for weaker dragons to lose a territorial dispute and find themselves forced into populated developments, said Matt Neff, an animal keeper at the Smithsonian National Zoo who cares for its elderly dragon, Murphy.

Encroachments from sea-level rise threaten to shrink their land even more, and Neff worries about climate change fueling big storms that could devastate their native islands.

"If there are more ferocious storms — and especially with rising seas — that can for sure affect them, just because there’s five small islands and nowhere else on Earth [they live]," Neff said.

"There’s already limited habitat space, so if there’s even less then it would just put more pressure on those animals," he said.

Less clear is how the dragons might respond to other climate pressures in their ecosystem, like fewer animals to eat.

The good news is that dragons attract eco-tourism, which in turn gives the Indonesian government the means and motivation to protect them, he said.

Dragons are relatively smart — research shows they can count to 10, at least when they’re tallying how many mice they’re fed. Their jaws are strong and their teeth are serrated. One of their hunting strategies is to ambush larger animals that, even if they escape, will stagger off to die from the venom and dangerous bacteria in the dragon’s bite.

But although the apex predators have a reputation as big and scary, Neff said they have moods and preferences like any other creature.

Murphy, the Smithsonian’s 20-year-old dragon, is crate-trained and visits the veterinarian for arthritis treatment.

"He’s a very nice, inquisitive animal. … He’s not as bloodthirsty as they make it seem on TV," Neff said. "I would love to think Murphy loves me, but he obviously doesn’t."

Global warming is inviting vampires into the United States.

Vampire bats could benefit from climate change because they’ll face fewer cold nights that limit how far north they can live.

Although nobody has found a vampire bat in the United States yet, climate modeling suggests they’ll be here before the end of the century. So does the fossil record.

The bats are currently confined south of the U.S.-Mexico border, but fossils show the higher temperatures of 10,000 years ago brought the vampire bat farther north, said Toni Piaggio, a researcher at the Department of Agriculture.

"In both Cuba and Florida, there’s fossils of that species — not like its progenitor or anything, I mean it’s Desmodus rotundus," she said, using the vampire bat’s scientific name.

That could be a problem. The bloodsuckers can spread rabies, and the Agriculture Department is teaching ranchers along the border how to recognize vampire bites on their cattle.

Researchers aren’t convinced vampire bats have already started shifting north; it’s possible they always lived so close to the Texas border without scientists realizing it. Their range might not change much with modest warming.

Vampire bats are generally sensitive creatures, said Mark Hayes, a senior bat ecologist with the environmental consulting firm Normandeau Associates. They only give birth once a year, they respond slowly to changes and they’re susceptible to stressors.

But in warmer conditions, scientists can’t point to anything else that would limit their spread north.

That comes with the caveat that their biological system isn’t fully understood. For instance, scientists aren’t sure how they lived before European colonists brought livestock to the Western Hemisphere.

Old sailor lore has as much to say about the kraken as science.

Until a few years ago, researchers only knew giant squid from the carcasses washing up on beaches and the beaks occasionally found in the bellies of sperm whales, their main predator. A Japanese crew reeled the first living specimen to the surface in 2006, and in 2012 a team observed one in its natural habitat.

Scientists believe giant squid swim in oceans everywhere except the poles. They feed by using their two main tentacles — up to twice as long as a giraffe and barbed with toothy suckers — to draw prey into their beak, where their sharp tongue dices fish and other squid into small pieces.

Overall, cephalopods like octopus and cuttlefish are expected to be climate change winners. Squid populations have boomed since the 1950s, with their short life spans and flexible behaviors earning them the nickname "weeds of the sea."

Warmer waters have made some squid grow more quickly, but their maximum size has shrunk and they die sooner.

It would make sense for giant squid to react similarly, said Gretta Pecl, a University of Tasmania professor and director of the Centre for Marine Socioecology.

"It would be reasonable to suggest that giant squid could possibly be not quite so giant [in the future]," she said.

Squid in general are well-positioned to be climate change winners, but whether giant squid will share that fortune is an open question. They might boom or disappear — there’s little evidence to inform a prediction in either direction, Pecl said.

Some think they might be slower to adapt than their smaller relatives.

"I suspect that giant squid may not fare quite so well," said Bronwyn Gillanders, a marine biologist who’s a professor at Australia’s University of Adelaide.

Giant squid live longer than their cousins, and their life strategies aren’t as flexible, she said.

There’s also some evidence to suggest ocean acidification will harm them, she said, but studies haven’t looked at giant squid specifically so it’s hard to extrapolate.

"Really, we know so little about giant squid it’s difficult to know how they will respond to climate change," she said.