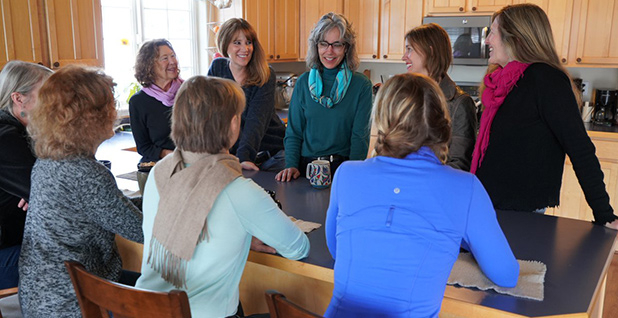 A former three-term state legislator, Williams, 57, spent more than three decades working on water and land issues before pulling off an upset in a primary earlier this month over two better-funded male challengers.

Williams intends to emphasize her bipartisan work on conservation to appeal to votes in a red state that President Trump won by about 20 points in 2016.

"When we get down to talking about natural resources, environment and energy issues, there is a lot more that we agree on than we disagree on," she said in a recent interview.

"It’s just a question of pulling aside the curtain of rhetoric and dogma and talking about how communities, agriculture and businesses are all dependent on keeping a long-term view of how we manage our natural resources."

As a water resources manager for Montana Department of Fish, Wildlife and Parks, she served on the statewide Governor’s Drought and Water Supply Advisory Commission. And most recently, she’s worked for the Western Landowners Alliance, pushing for responsible uses of public and private land.

The Cook Political Report rates the race as likely Republican, given the GOP lean of the state and Gianforte’s past willingness to spend millions of his own money on past campaigns.

But political observers note that Gianforte only won last year by single digits, after admitting to assaulting a news reporter, and, they say, Williams could benefit from a strong turnout of female voters this fall.

And a poll released this week from Gravis Marketing has Williams 6 points ahead of Gianforte. The survey had a 4.5 percentage point margin of error.

Williams chatted with E&E News about her campaign, selling climate change science and her love of angling as she wrapped up a house party in Bozeman, Mont., earlier this month, where she drew laughs from about three dozen voters after calling herself a "crazy optimist" given her years of work on Western water policy.

Will public lands and the environment be a major issue in your race?

This is Montana, right? So much of our culture, economy and identity is wrapped in our beautiful mountains and plains and rivers — and protection of those is key.

What will be the top issues?

Ensuring public lands remain and stay in public hands and that public lands aren’t industrialized in places where it’s incompatible. I think protecting clean air and water is key. And climate change is becoming a more and more mainstream issue that all of Montana, including our agriculture sector, is understanding is changing our future and our present.

How do you sell climate change in a red state?

One major difference between you and Gianforte is over his legislation that would remove about 240,000 acres from wilderness study areas in Montana and allow for more public access. You oppose it — why?

To just by fiat to decide [to open up the lands] from Washington is not being rooted in Montana and not allowing Montanans to decide what they want. That’s not the way to go; I value public process and the integrity of input and encourage agencies to listen to that and ensure it’s incorporated into their decisions.

An energy issue that often comes up in races out here in the future of Colstrip, Mont., a town heavily reliant on coal. Republican say limits on coal production are driving away jobs and killing the town. What do you think?

It isn’t a war on coal; it’s the market options and consumers that are demanding something different. I think all our communities in Montana need to make sure they have diversity in their economies to be able to weather market conditions. Colstrip is a community that we need to help diversify so that it can weather this market change.

I have been a proponent of research to find whether there are ways, such as methanogenesis and other [technologies], to convert coal in a more climate-friendly way to energy.

How crucial is the "year of the woman" effect to your campaign?

The year of the woman helps, but it also helps to be the most qualified.

You have spent a lot of time working on issues involving preserving waterways. Do you fish much?

I am an angler. My husband used to tease me that previous to meeting him, I only dated fish biologists. I love to fish, but I have not gotten out much lately.