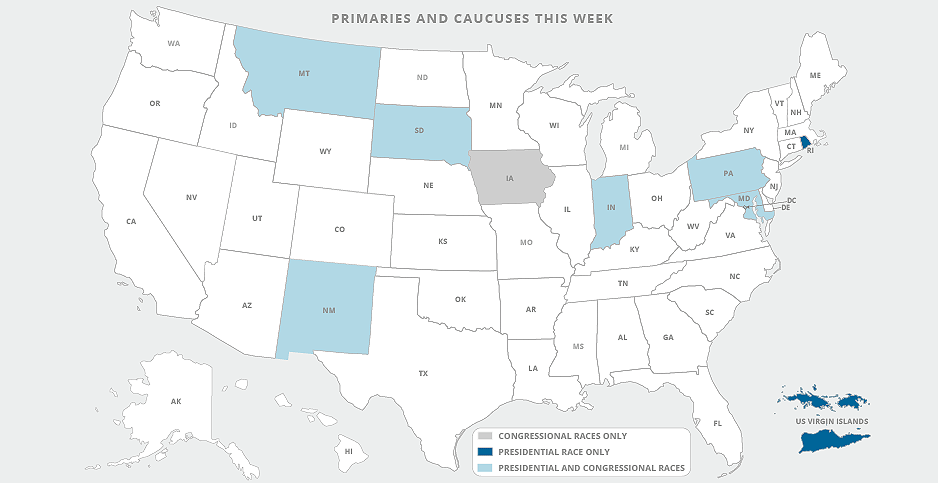 Eight states and Washington, D.C., will complete primaries tomorrow in what has become one of the year’s biggest primary days because of pandemic-related calendar changes.

Many of the states had previously planned primaries earlier this year but delayed them to avoid having voters go to crowded polling stations. And most states are still encouraging mail-in voting.

Indiana, Maryland, Montana, New Mexico, Pennsylvania, South Dakota and the District of Columbia are holding both presidential and congressional primaries, while Iowa has only congressional races and Rhode Island is only holding a presidential contest.

Sen. Bernie Sanders (I-Vt.) decided to stay on primary ballots when he dropped out of the presidential race earlier this year, to gain leverage in the Democratic Party’s platform process.

The congressional contests are also expected to bring few if any surprises. Nonetheless, tomorrow will formally set the course for some closely watched general elections in the fall.

Here are some of the races to watch:

Montana voters will pick the candidates for all of the state’s major races: a Senate seat, the House seat and governor.

Gov. Steve Bullock, who is term-limited, is running for Senate and is likely to win the Democratic nod over scientist Mike Knoles and engineer John Mues.

The Senate race is one of the most closely watched in the country. Recent polls show Bullock with a lead over Daines; a Bullock victory would move Democrats a step closer to taking the Senate majority.

Issues surrounding public lands and conservation have already been a major point in the race, with both candidates arguing that they would be the best public lands stewards (E&E Daily, May 7).

In the state’s sole House district, incumbent Rep. Greg Gianforte (R) decided to run for governor instead of seeking another House term.

The Republican side is more crowded, with six contenders, including Secretary of State Corey Stapleton and former Senate candidate Matt Rosendale.

Sen. Joni Ernst (R) is unopposed seeking a second term, but there are five Democrats vying for the chance to take her on in a race national leaders on both sides of the aisle think could help decide who controls the Senate come January.

Most of the Democratic establishment, including the Democratic Senatorial Campaign Committee, is behind businesswoman Theresa Greenfield. She was a widow at 24, and has accused Ernst of leaving Iowan’s behind.

“Listen folks, she didn’t castrate anyone,” Greenfield said in her campaign announcement video, making a reference to Ernst’s successful campaign ads in 2014 about making Washington squeal.

Rep. Steve King (R) is in for the fight of his life. The outcast Republican, who has not sat on a congressional committee for most of the 116th Congress, has four GOP challengers trying to unseat him.

Businessman Randy Feenstra is considered the favorite. Feenstra is a state senator and has the support of numerous Republicans, and Republican-leaning groups, including the U.S. Chamber of Congress.

King lost his committee posts, including a spot on the Agriculture Committee, in early 2019 after a string of insensitive remarks about white nationalists. The outspoken conservative has represented the 4th District in northwest and central Iowa for nine terms.

Whoever wins the GOP primary will face off against Democrat J.D. Scholten, a former baseball player who narrowly lost to King in 2018.

Republicans have their eyes on Reps. Abby Finkenauer (D) in the 1st District and Cindy Axne (D) in the 3rd District, who both flipped Republican-held seats in 2018.

President Trump tweeted his support for Ashley Hinson in the 1st District race last month. She also has the support of House Minority Leader Kevin McCarthy (R-Calif.). Hinson is a former television anchor.

In the 3rd District contest former Rep. David Young (R) is hoping to get his old job back that he lost to Axne in 2018. He faces off against military veteran Bill Schafer.

There are five Republicans running, including former Rep. Robert Schilling (R-Ill.), who lost his seat to Rep. Cheri Bustos in 2012. Democrat Rita Hart is running unopposed.

Sen. Tom Udall (D), a leading lawmaker on issues like toxic substances and conservation, is retiring after more than 20 years in Congress.

Rep. Ben Ray Luján (D) is the favorite to succeed him and is the only Democratic candidate on the ballot in tomorrow’s race. Three Republicans are competing to run against him.

Luján’s House seat is in the 3rd District, a heavily Democratic area in the northern part of the state. Seven Democrats are vying for the open seat, including former CIA officer Valerie Plame, as are three Republicans.

Pennsylvania’s congressional delegation is still feeling the effects of a 2018 court-ordered redistricting that made the state overall more friendly to Democrats but changed the dynamics for some lawmakers in both parties. Nonetheless, no incumbent is expected to lose in a primary.

Rep. Brian Fitzpatrick (R) of the 1st District has faced numerous close races in the past, and this year is shaping up to be no different. Tomorrow he faces a primary challenge on the right from businessman Andy Meehan, while Bucks County official Christina Finello and businessman Skylar Hurwitz compete for the Democratic nomination.

Fitzpatrick is one of the most outspoken climate change activists among GOP lawmakers and has sponsored carbon tax legislation. Going into the fall, he has received the League of Conservation Voters Action Fund’s endorsement, the group’s first GOP nod since 2016.

Rep. Matt Cartwright (D) has a more Republican 8th District due to redistricting and is a top GOP target in this year’s race. He doesn’t have a primary challenger, but six Republicans are vying to take him on, including veteran Earl Granville and Republican strategist Jim Bognet.

Rep. Scott Perry (R) similarly has a more risky district than before in the 10th District. He doesn’t have a primary challenger, but state Auditor General Eugene DePasquale and attorney Tom Brier, a Green New Deal supporter, are running to be the Democratic candidate.

House Majority Leader Steny Hoyer (D) is the latest longtime incumbent Democrat to face a primary challenger from the left. Mckayla Wilkes’ long-shot campaign has the backing of progressive groups like Friends of the Earth Action, 350 Action and Brand New Congress.

Wilkes supports the Green New Deal, "Medicare for All" and debt-free public college. She has argued that Hoyer is out of touch with the direction of the southern Maryland district. Wilkes, 29, criticized Hoyer last month for endorsing the oil industry’s request to buy more oil for the Strategic Petroleum Reserve (E&E Daily, May 13).

But although progressive groups are putting significant efforts into replicating the Democratic primary upsets that put Reps. Alexandria Ocasio-Cortez (D-N.Y.) and Ayanna Pressley (D-Mass.) into power in 2018, they’ve had little luck. The one exception has been Marie Newman’s victory over Rep. Dan Lipinski in Illinois (E&E Daily, March 18).

Indiana’s primaries are likely to pick the next representative in two heavily partisan districts. Rep. Pete Visclosky (D) is retiring from the 1st District, and Rep. Susan Brooks (R) is retiring in the 5th.

Fourteen Democrats are vying for Visclosky’s seat, as are six Republicans. The race for Brooks’ seat will see 15 Republicans and five Democrats.