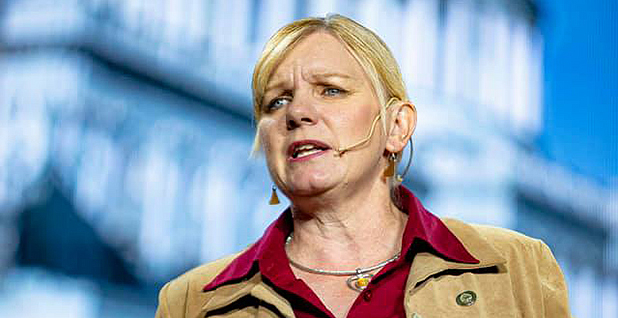 DENVER — As Montana state Sen. Jennifer Fielder (R) ticks through her well-worn list of incentives for lands management — citing clean air and water, as well as access for recreation and sportsmen — she sounds like many other advocates for public lands.

But there’s one key difference: Fielder wants Congress to turn over control of vast swaths of federal acreage to their respective states.

"Who knows and cares about the lands here in the West more than the people who work and play and raise their families right here in the West? It’s time to free our lands from federal ‘bureau-crazy,’" Fielder said Friday as she addressed the annual Conservative Western Summit.

Fielder, who became CEO of the American Lands Council in 2016, is among the major voices in the federal lands transfer movement.

During an hourlong workshop here Saturday, Fielder reiterated her key talking points: criticizing what she sees as the federal government’s "hands-off management" style and asserting that states are better positioned to oversee lands within their borders.

"We can afford to keep the public lands public and to manage them better," said Fielder.

Although President Trump opposed state lands transfer during his 2016 campaign — raising concerns that state governments could sell property in the event of budget shortfalls — Fielder remained optimistic that the administration is open to her ideas (E&E Daily, Feb. 22, 2016).

"The president’s administration has been very friendly to us," Fielder said, pointing in particular to Trump’s pardon of Oregon ranchers Dwight and Steven Hammond.

The father-and-son ranchers were convicted in 2012 on arson charges after a judge determined the duo had maliciously damaged federal property adjacent to their ranch (Greenwire, July 10, 2018).

Fielder also cited "small improvements" to land management under the Trump administration. She has likewise previously praised Trump for rolling back protections for more than 2 million acres of former national monument lands in Utah (Greenwire, Jan. 4, 2018).

Now Fielder said she is working with congressional lawmakers to introduce lands transfer legislation on Capitol Hill. She told E&E News she’s not ready to identify them publicly.

"We’ve had some discussion with several members of Congress," Fielder told E&E News, noting that her organization doesn’t have a full-time lobbyist. "We’re hoping we can get some more education done and get some bipartisan support."

She added: "If the people that really care about the environment and conservation, I think if they learned more about what’s really going on there and they work with us on a very thoughtful piece of legislation, that we really can have the win-win that is our intention. We don’t have a nefarious agenda."

The "National State Lands Act" envisioned by Fielder would permit the transfer of federal lands — with a notable exception for National Park Service units — to their respective states, which must "promise" to keep the lands available for public use.

Under Fielder’s proposal, states would also be required to work with local officials to manage the newly acquired lands and would be mandated to maintain existing mineral, grazing and water rights.

As she took questions Saturday from the crowd of about three dozen individuals, it was clear that Fielder was preaching to the choir.

She lamented that opponents of the lands transfer movement are "motivated by deception," particularly by "foreign governments" and "interests who want to shut down the American economy."

"Those other countries that are natural resource-based countries don’t want the competition," Fielder added.

Fielder also echoed the concerns of one individual who questioned whether the United States could forfeit its public lands to foreign governments were it to default on the national debt.

"I saw one article that China had requested our public lands as collateral," Fielder said. "I can’t find it again."

The story Fielder referred to is a conspiracy theory begun in 2009 that suggests then-Secretary of State Hillary Clinton agreed to Chinese demands for land as collateral. The fact-checking website Snopes lists the source of that theory as a blog known for publishing other political fictions.