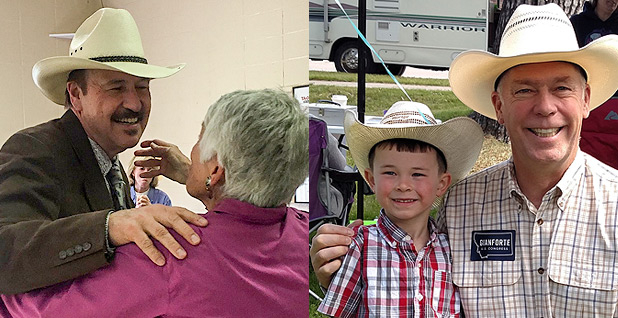 (Left to right) Democrat Rob Quist and Republican Greg Gianforte have been crisscrossing Montana in the last days of their House special election. @RobQuistforMT/Twitter;@gianforte/Twitter

The Montana special election took a turn for the weird last night.

At approximately 7 p.m. EDT, Republican Greg Gianforte allegedly assaulted a reporter for The Guardian, slamming him to the ground and breaking his glasses. Montana voters head to the polls today for a special election to fill the state’s sole seat in the House of Representatives.

"He took me to the ground," said Ben Jacobs, a Guardian politics reporter, said in a phone interview with his newspaper from an ambulance last night. "This is the strangest thing that has ever happened to me in reporting on politics."

A local television station captured audio of the incident, which occurred at a Gianforte campaign event in Bozeman, Mont. Jacobs was asking Gianforte about the Congressional Budget Office score of the GOP-backed American health care bill, which was released late yesterday. After Gianforte avoided the question, Jacobs asked again. A crash follows.

Earlier this month, Jacobs reported that Gianforte owns about $250,000 in stock shares in two Russian companies sanctioned by the United States.

"Gianforte grabbed Jacobs by the neck with both hands and slammed him into the ground behind him," wrote Denver-based reporter Alicia Acuna in an online article.

The article contradicted the Gianforte campaign’s statement on the incident, which claimed Jacobs was aggressive and grabbed the candidate.

"To be clear, at no point did any of us who witnessed this assault see Jacobs show any form of physical aggression toward Gianforte," wrote Acuna.

Acuna and her team gave statements to the police.

Social media photos from local reporters showed medics and law enforcement on the scene. The Gallatin County Sheriff’s Office confirmed in a news release that it is investigating, and Gianforte was charged with misdemeanor assault and must appear in court June 7.

"Speaker [Paul] Ryan [R-Wis.] and the National Republican [Congressional] Committee should not waste another minute before publicly denouncing their candidate and apologizing for the millions of dollars they spent on his behalf," DCCC spokesman Tyler Law said in a statement.

A statement from the Gianforte campaign said Jacobs was not supposed to be in the room.

"It’s unfortunate that this aggressive behavior from a liberal journalist created this scene at our campaign volunteer BBQ," said Gianforte spokesman Shane Scanlon.

This could not have come at a worse time for Gianforte, who was already having a rough week. Even before the altercation, the race had attracted national attention as Gianforte slipped in the polls and national Republicans tried to avoid a stunning upset in a seat considered safely red even a month ago.

It was all hands on deck for Gianforte in the race’s final 48 hours: President Trump and Vice President Mike Pence recorded robocalls; Republican Sens. Ted Cruz of Texas, Marco Rubio of Florida and John McCain of Arizona sent emails urging voters to the polls; and the National Rifle Association announced a late phone bank flurry.

In the past month, Donald Trump Jr. and Pence have campaigned with Gianforte, who has embraced the Trump administration.

The reason for the late GOP panic: a surge in recent weeks by Democrat Rob Quist, who toured the state with Sen. Bernie Sanders (I-Vt.) last weekend. The campaign announced Tuesday more than $6 million in total donations, an impressive haul for a Montana Democrat in an off-year race. More than half of that total came in the past three weeks.

That was not the case a few months ago. The seat was vacated by popular GOP Rep. Ryan Zinke, who left to head the Interior Department, and polls for several weeks showed Gianforte with a healthy double-digit lead.

Gianforte, 56, has not helped himself on this front (E&E Daily, May 23). A secretly recorded phone call revealed Gianforte praising the "American Health Care Act," which would repeal the ACA, to a group of conservative donors.

This differed from his public statements on the bill. On the day the bill passed the House, the campaign released a statement saying Gianforte would not have supported the bill due to the lack of details on its impact.

Jacobs was asking Gianforte about the Congressional Budget Office score of the bill, which offered Quist some late ammunition yesterday. Compared with the Affordable Care Act, the replacement would increase the number of uninsured Americans by 23 million by 2026.

"It seems like everyone in Montana knows that the D.C. healthcare bill would be a disaster for our state, except for Greg Gianforte, who said he was ‘thankful’ for it," Quist said in a statement last night. "This un-American bill would raise premiums on Montanans, end coverage for at least 70,000 people and eliminate protections for pre-existing conditions — all to pay for huge tax breaks for multimillionaires like Gianforte himself."

But while national politics have made the race competitive — bringing widespread attention — the substance of the race has been largely Montana-specific, involving issues of public lands, mining and local identity in a state that prides itself on political independence (E&E Daily, March 30).

Gianforte, a former tech entrepreneur from New Jersey, lost the 2016 gubernatorial race and despite two statewide campaigns still struggles to convince voters that he is a genuine Montanan. On the other side is Quist, a cowboy-hat-wearing former lead singer for a country music band. Quist has never held elected office, but he has played concerts at a nudist resort, as GOP groups have been happy to point out.

A fifth-generation Montanan, Quist accused Gianforte of opposing access to public lands — a tactic that helped Democrats defeat Gianforte in the 2016 gubernatorial race — and for being a carpetbagger from New Jersey.

Both campaigns released television ads with the candidates sporting firearms. But in a scandal that was pure Montana, public records showed that Quist had not held hunting or fishing licenses since 2002. The Gianforte campaign jumped at this, calling Quist dishonest and out of touch with hunting-obsessed Montana. Gianforte touted his big-game hunting permits, including bear, mountain lion and antelope.

Quist has also been dogged by a shaky financial history, including unpaid property taxes, defaulted bank loans and three tax liens issued against him by the state.

The National Republican Congressional Committee, the Congressional Leadership Fund and the U.S. Chamber of Commerce used these revelations in dozens of campaign ads, blanketing the state in nearly $5 million in campaign spots.