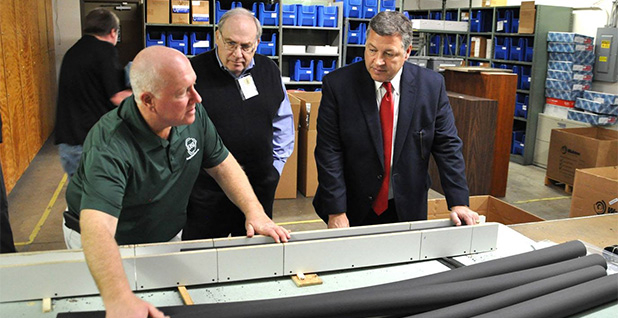 The Trump administration will continue pitching its infrastructure plan on Capitol Hill this week.

Chao will return as a witness at the House Transportation and Infrastructure Committee hearing.

The meeting will be the first official House action on the Trump plan and likely another step in the administration’s campaign to sell the plan to members — particularly Democrats — skeptical that anything will come of it this year.

The administration started that crusade last week, as representatives from the White House, Army Corps of Engineers and Transportation Department spread out across the Hill to talk up the plan.

White House infrastructure aide D.J. Gribbin rebuffed attacks on the proposal during a speech to the American Association of State Highway and Transportation Officials on Thursday.

Meanwhile, Alex Herrgott, the infrastructure point man for the White House Council on Environmental Quality, and Jim Ray, an infrastructure adviser for the Transportation Department, touted the president’s ideas at an event sponsored by Bracewell LLP’s Policy Resolution Group.

Still, some around Washington, D.C., wonder whether Congress will pass much of anything, much less a big infrastructure bill, once it finishes work on the omnibus later this month.

Sen. John Cornyn (R-Texas), a member of leadership, repeatedly said last week that it might be difficult to find the time, especially with the glacial pace of nominee votes in the Senate.

But administration officials have a rosier outlook. "It’s a default in this town to be a naysayer," Herrgott said last week. "It’s easy."

Once other big-ticket issues move to the wayside, Herrgott added, "we’re going to see a lot of movement that currently folks are not necessarily giving as much credit to."

Trump has proposed spending $200 billion in federal money to leverage $1.5 trillion in total investment. The president’s plan would also put a shot clock on National Environmental Policy Act reviews and make other changes to permitting, ideas that don’t sit well with Democrats.

"He put out a package, there was some really great stuff in it," Shuster said last week. But, he added, "some of the stuff he put in it I’m not so sure it’s going anywhere, and I’ve been very frank with him and his team."

Shuster said he’s hoping to push legislation through the House before the August recess or, failing that, during the lame-duck session after the elections (E&E News PM, Feb. 28).

But key lawmakers still face the monumental task of paying for Trump’s proposed $200 billion investment. The always-tricky Highway Trust Fund, which is set to become insolvent in 2020, has entered the conversation, as well.

Chao and other administration officials said last week they’re interested in stabilizing the fund, which is paid for by the federal gasoline tax.

On the issue of raising the gas tax, which hasn’t been hiked since 1993, the administration’s perspective isn’t clear cut. Trump is said to have endorsed an increase, but Chao and other officials have tamped down that excitement.

The trust fund and gas tax could feature prominently at a separate hearing on Wednesday in the House Transportation and Infrastructure Subcommittee on Highways and Transit to discuss long-term funding for highways and transportation programs.

Shuster, who supports raising the tax, will try to get the wheels moving on the full committee tomorrow before lawmakers start bearing their political teeth in the midterm season.

Shuster said at the transportation officials’ conference last week that he anticipates losing some Republican votes on a bipartisan bill in order to lure enough Democrats to push it through the Senate.