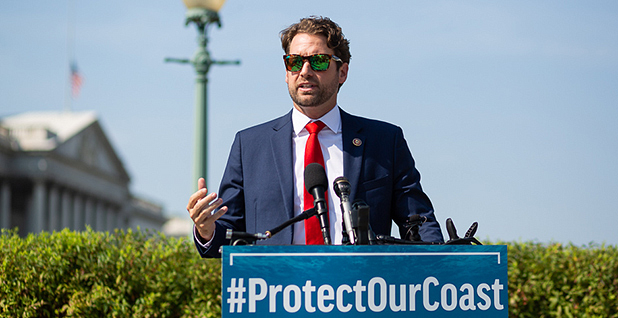 Reps. Mike Kelly (R-Pa.) and Joe Cunningham (D-S.C.) both announced Friday they have tested positive for COVID-19, adding to the list of lawmakers with confirmed cases of the disease caused by the novel coronavirus.

Cunningham, a member of the Natural Resources Committee and a major opponent of offshore drilling, had been self-quarantined since March 19 after coming in contact with another member who tested positive.

The Democrat reported he felt fine except that he has been unable to smell or taste anything, a symptom of the disease.

"While my symptoms have begun to improve, I will remain at home until I know it is safe to leave self-quarantine," he said in a statement. "I will continue to tele-work from home as Congress conducts its ongoing response to this public health crisis and my office will continue its urgent work of serving the people of the Lowcountry."

"My symptoms remain mild, and I will serve the 16th district from home until I fully recover," he said in a statement.

Both houses are in recess after clearing a massive $2 trillion pandemic relief package. While lawmakers had been practicing various forms of social distancing as they worked on the legislation, a handful of positive tests began rolling out during the last two weeks.

So far, McAdams appears to be the lawmaker who has experienced the most serious symptoms of COVID-19, such as severe shortness of breath. He was hospitalized March 20, but local news outlets reported Saturday he had been released.

Sen. Rand Paul (R-Ky.) is the only confirmed case in the Senate. Paul is asymptomatic and in quarantine, but he had been on Capitol Hill conducting normal business shortly before his positive test was announced.

Dozens of other lawmakers have entered self-quarantine during the last month, including some senators who had contact with Paul and at least one member of leadership — House Minority Whip Steve Scalise (R-La.).

Reps. Lizzie Fletcher (D-Texas) and Seth Moulton (D-Mass.) are both in quarantine with flu-like symptoms and potential cases of COVID-19.

Moulton said he was told by a doctor he did not qualify for a test, since his symptoms were mild, while Fletcher has not yet announced the results of her test.

But the Texas Democrat, who represents a wealthy section of Houston, has stayed active in isolation despite reporting a 101-degree fever. Fletcher participated in a telephone town hall on COVID-19 on Friday.

This afternoon Rep. Nydia Velázquez (D-N.Y.) said the attending physician at the Capitol told her she likely has coronavirus, after reporting fever, aches, congestion and upset stomach. The congresswoman is self isolating.

In addition to the positive tests among lawmakers, the pandemic has rippled through the broader Capitol Hill community.

Tours of the Capitol were suspended earlier this month, and Congress is expected to take an extended recess, with the Senate tentatively set to return April 20.

The Senate sergeant at arms said today that restrictions at the Capitol complex — limiting access to lawmakers, official visitors, staff and credentialed press — will be extended through May 1.