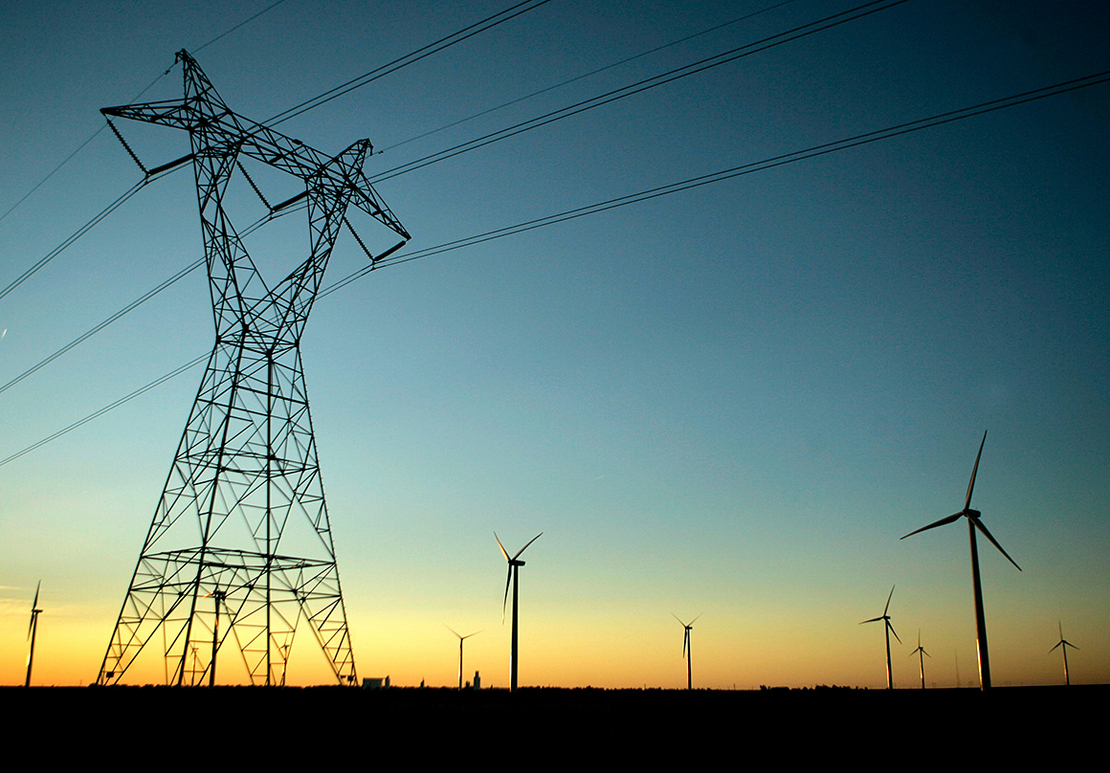 With its signature climate legislation roadblocked in Congress, the Biden administration is seeking an unprecedented expansion of high-voltage electric lines to open new paths to wind and solar energy.

“We obviously need more, more, more transmission to run on 100 percent clean energy … and handle all the buildings and the cars and the trucks that we’re working to electrify,” Energy Secretary Jennifer Granholm said in February.

For example, 80,000 megawatts of new wind farms could be built on open lands in Montana, Wyoming and the Dakotas, the Energy Systems Integration Group (ESIG) noted at a DOE webinar in March. But today, there’s only enough existing high-voltage transmission to export one-tenth of that amount, according to ESIG, a nonprofit organization of grid experts.

The gap highlights a major challenge for President Joe Biden’s goal to decarbonize the grid by 2035. In response, DOE has started to roll out a range of proposals under its $16 billion Building a Better Grid initiative announced in January, hoping to break through layers of obstacles to transmission.

DOE invited suggestions this month on how to structure the shorter-term initiative. It will contract to purchase up to half the electricity on new power lines up to a total commitment of $2.5 billion, aiming to get previously announced projects across the starting line to construction.

“We hope that we can expand the program in 2023 with some of the other authorities we have,” Hoffman said. DOE would resell the power to utilities, replenishing the funding pool, under the plan.

“We recognize that the earliest opportunity” for impact “is buying capacity contracts,” she said. “We are looking for projects that are further along in the development cycle.”

DOE’s recent information notice about the program said it expected to fund lines that could start operation by December 2027.

“[T]he good and the bad is there’s only $2.5 billion in this program,” said Michelle Manary, acting deputy assistant secretary at DOE’s energy resilience division in the electricity office, speaking at a February webinar that also featured Granholm. “I wish I had a couple of other zeroes on there, because I could spend it, because transmission is expensive.”

“The goal of DOE is to get in, get out, as fast as we can” as soon as a project is solidly in place, so that the funding can be recycled to other projects, she added.

Some projects can also be funded with DOE’s existing loan program, officials said.

Jigar Shah, the DOE loan office director, said during that DOE webinar that the department was working closely with developers of high-voltage direct current line proposals. “Right now, we probably could do two HVDC lines simultaneously,” Shah said. “We’d like to be able to four or five simultaneously,” he said.

Transmission advocates say DOE could choose from among 22 large-scale “shovel ready” transmission projects under development across the United States, many of them stalled or slowed by permitting and siting challenges. If completed, the lines would be able to deliver the output of 60,000 MW of new wind and solar generation, an increase of 30 percent over current levels, according to a study last year by Americans for a Clean Energy Grid.

The projects average 350 miles in length, with estimated budgets $1.5 billion, the study said, showing that the $2.5 billion DOE loan funds would have to be recycled to cover many of the lines.

A key part of DOE’s strategy centers on a new National Transmission Planning Study led by DOE laboratory staff that looks ahead 15 to 30 years to assess how the nation’s future high-voltage grid should be configured to deliver enormous amounts of wind and solar power for a zero-carbon grid.

“We’re taking a hard look where some of the capacity transfers are going to needed across the United States based on several scenarios,” Hoffman added.

One widely cited computer analysis last year, led by Princeton University researchers, estimated that reaching a zero-carbon grid on the Biden administration’s timetable would require more than triple the current amount of renewable energy capacity and a 60 percent increase in high-voltage lines.

An expansion on that scale would have to include “macrogrids” of new high-voltage circuits crossing U.S. time zones, according to a number of experts.

That macrogrid approach is one of the strategies under consideration, said Josh Novacheck, an electricity systems research engineer at the DOE National Renewable Energy Laboratory in Golden, Colo., who is one of the study leaders, in an interview.

The first results from the study assessing the state of the current transmission system are expected this summer. More detailed scenario analysis investigating options for the expansion of the grid will become available throughout 2023, he said.

Researchers from DOE, NREL and the Pacific Northwest National Laboratory led a three-hour online review Friday of the planning mission’s goals and approaches.

DOE planning engineer Hamody Hindi said during the session that the study, using computer models of future grid designs, will help prioritize DOE funding for transmission investment to achieve carbon reduction targets. It will not replace existing state and regional planning or map out individual transmission line routes, he added.

The DOE planners aim to present evidence on costs of grid expansion, impacts on carbon emissions, and implications for reliable and resilient grid operations as foundations for policymaking at national, regional and state levels, officials said.

“This is really about exploring different scenarios we can follow,” Novacheck told the meeting.

There needs to be a bridge between what DOE comes up with and “getting somebody obligated to design projects and get them built,” energy attorney Lauren Azar said in an interview. Azar was another speaker at the March webinar on the study.

The infrastructure legislation also allots $3.25 billion to the DOE Western Area Power Administration for new power line connections to renewable resource generation and $5 billion to tribal organizations that could support other transmission projects.

The financial support promised by DOE aims to address a major funding challenge holding up big transmission projects in the United States, but other roadblocks persist.

Those include disagreements among state officials over how costs of long-distance lines should be shared, governors’ preferences for in-state renewable development, not-in-my-backyard citizen opposition, and pushback from energy companies that don’t welcome the additional competition from low-cost wind and solar farms that new power lines deliver, according to a Brattle Group analysis last year that aligns with the administration’s view.

“It’s just not working,” Johannes Pfeifenberger, a Brattle Group principal, told the DOE webinar in March, summarizing the report. “There are a bunch of merchant projects that have been proposed, but it’s very hard for them to get across the finish line, too, and many of these proposed merchant projects failed to get state permits.”

A vital step in getting transmission projects unblocked is justifying their costs in terms of adding carbon-free energy and hardening the grid to withstand threats from extreme weather and potential adversaries, grid advocates say. “While national studies show there are benefits of interregional transmission, these studies do not create an actionable ‘need’ for approving projects,” Pfeifenberger’s webinar presentation stated.

The timetable for the Biden transmission initiative is not set, but given project times that can stretch over a decade or more, much of the hoped-for tide of new renewable power isn’t likely to arrive before the next presidential election, whose outcome could advance or halt the administration’s grid plan.

DOE officials stress the importance of finding allies for transmission expansion among states and utilities with their own clean energy goals.

The Clean Energy States Alliance lists 21 states that have set challenging targets for carbon-free power. On the other side of the issue, 19 states, led by West Virginia, are before the U.S. Supreme Court in a pending case, seeking to curb the authority of EPA to regulate greenhouse gas emissions (Greenwire, Feb. 28).

Hoffman said it was premature to discuss another controversial part of the infrastructure legislation strengthening DOE’s authority to designate “National Interest Electric Transmission Corridors,” where routes for new power projects could be sited based on developers’ applications.

The legislation creates backstop federal authority to issue permits for new projects that are blocked at the state level, under specific conditions.

But DOE officials are preaching teamwork, not confrontation, in transmission expansion.

‘It takes a village’

In February, Granholm said she wanted “new transmission lines to have collaboration and communication in their foundation at the beginning, so that they can meet local needs and help communities nationwide achieve their energy goals, and that means we have got to bring folks to the table.”

DOE’s Manary echoed Granholm’s point at the same February webinar. “You’ve heard it over and over again. I just want to emphasize that it takes a village,” she said. “This is not something that one agency, whether it be state or local or federal or private, can do alone.”

Meanwhile, a similar grassroots focus on transmission is embedded in a separate initiative by a majority of commissioners at the Federal Energy Regulatory Commission who issued a proposed rule last month that would change how high-voltage power lines are planned, approved and paid for in order to accelerate transmission construction.

In addition to promoting advanced grid technologies, the proposed rule would require transmission owners to look at least 20 years ahead in planning new power lines, building for a future with much more wind, solar and storage investment (Energywire, April 22).

“Let us be clear,” he said in a dissent. The initiative’s “primary purpose is to achieve narrow environmental policy objectives, not to address legitimate requirements under the Federal Power Act,” Danly said.

“The majority seeks to establish policies designed to encourage the massive transmission build-out that will doubtless be required to transition to an aspirational renewable future,” he said. “To do so, they need to socialize the costs of this transmission across as broad a population of ratepayers as possible.”

The FERC majority, like DOE, is looking for allies. The proposal would put state officials at the table when grid administrators decide what new power line projects should move forward, to try to amplify the voices in favor of transmission expansion.

“To be clear, should the states choose to accept the role proposed [by FERC], they will become decision partners in guiding transmission investment,” Commissioner Allison Clements, a Democratic appointee, said in voting for the proposal.