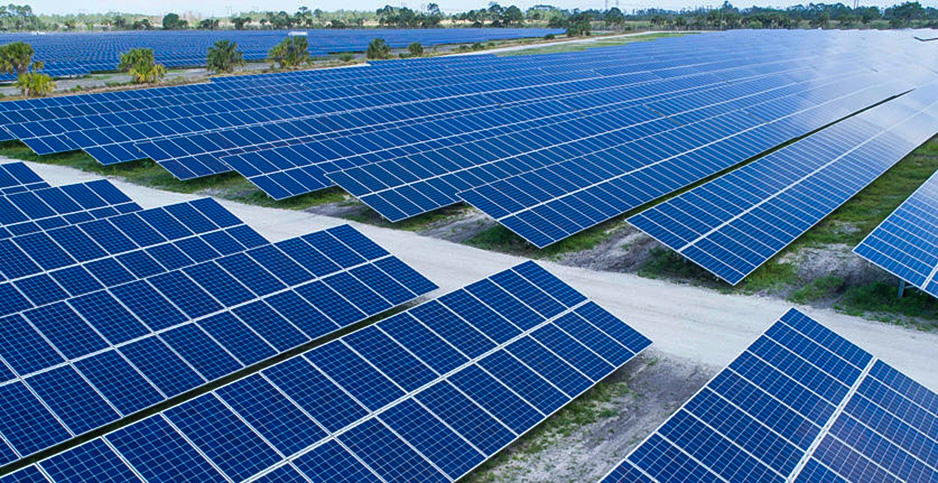 A new poll suggests one area most voters, regardless of party affiliation, can agree on, is increasing solar power. Florida Power & Light Co.

Republican and independent voters are moving closer to the Democratic Party’s climate and environment agenda, according to a poll released today by the Pew Research Center.

Compared to 2016 survey results, support is up for every renewable energy source as well as nuclear power, while support is down for every kind of fossil fuel development, including hydraulic fracturing and offshore drilling.

Although none of the questions mentioned President Trump by name, the results signal low support for his so-called energy dominance agenda. They also suggest voters aren’t persuaded by the president’s claim that he’s delivered "record clean" air and water.

That statement was part of Trump’s speech in July touting his environmental record, reportedly at the behest of advisers who see his reelection prospects slumping in suburbs where green issues tend to be popular.

Millennial and Generation Z Republicans — those younger than 38 — hold environmental views that approximate the general public’s: 52% say the government should do more to protect the environment, and 72% think the country should prioritize alternative energy sources. Republican women are also more likely to hold these views, to a lesser extent.

But conservatives, men and older Republicans — who constitute the majority of the Republican Party — remain mostly unconcerned. Conservatives are split, 49% to 49%, over whether the government should prioritize fossil fuels or renewables.

Most conservatives (59%) think natural patterns explain a "great deal" of climate change, and 45% think human activity plays little to no role. And 73% of conservatives believe green policies have no benefit or actually harm the environment.

Even each party’s own moderates are quite different on climate. Among moderate and liberal Republicans, 35% say humans have a great deal of impact on the climate. That number among moderate and conservative Democrats is 64%.

The poll reveals another gap: Democrats and Republican women are all about equally likely to say they would change their behaviors to reduce waste and pollution; Republican men are the outlier.

The poll was conducted Oct. 1-13 among 3,627 adults. The error margin was 2.1 percentage points for adults polled; the margin varied for each subgroup.

Among other results, most Americans (62%) say climate change is already affecting their local community.

People who live within 25 miles of a shoreline were more likely to notice sea-level rise, with 72% of those people calling it a major impact.

The place where climate change is felt most strongly is the Pacific West, where 72% of adults say it’s affecting their communities.

Expanding solar power wins support from 92% of Americans, and wind power gets 85%.

Nuclear power has gained a 6-point bump in support since 2016 — but that just gets it to breaking even.

Americans are torn over whether to expand nuclear power, with 49% on both sides.

Offshore oil drilling, fracking and coal mining still win a majority of Republican support. But millennial and Gen Z Republicans are less likely to support them, as are moderate or liberal Republicans.

More coal mining and fracking get support from 66% of conservatives, but they lose majority support among more moderate Republicans. Only 42% want to expand fracking, and 40% want more coal mining.

Democrats are mostly united in opposition to all that. Nine percent of liberals and about 23% of conservative and moderate Democrats favor more coal mining.

Support for offshore oil drilling has risen among Republicans, reaching 68% now from 64% in 2016. But Democratic support has fallen to 21% from 32% over the same time.