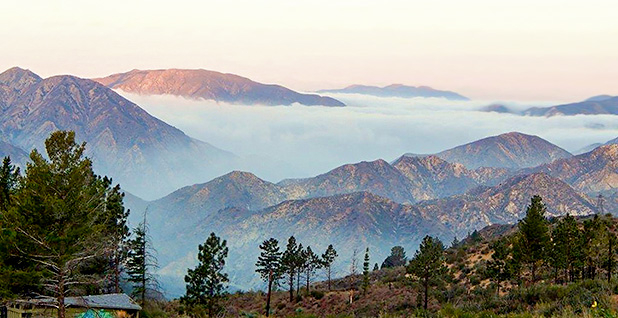 Angeles National Forest in California is one of the country's most visited national forests. U.S. Forest Service/Wikipedia

The director of the Bureau of Land Management’s California state office is leaving for a position with the Forest Service, ending months of speculation that he would be replaced while continuing a recent trend of leadership shakeups at BLM.

Jerry Perez, who has led the BLM California office since January 2016, has notified his employees via email that he is leaving the agency this fall to become supervisor of the Angeles National Forest in Southern California, according to sources who asked to remain anonymous because they’re not authorized to discuss the matter.

A BLM spokeswoman later confirmed to E&E News that Perez "announced on Friday" to staffers that "he has accepted a position with the U.S. Forest Service as the Angeles National Forest Supervisor."

The Forest Service also confirmed that Perez will be supervisor at the 700,000-acre Angeles National Forest — one of the country’s most-visited national forests, less than an hour’s drive north of the Los Angeles metropolitan area.

Perez will replace Jeffrey Vail as forest supervisor, starting Oct. 14, according to a brief internal email the Forest Service’s Pacific Southwest Region sent Friday to staffers. The region manages about 20 million acres of national forest lands in the state.

Martha Maciel, a BLM spokeswoman in California, said in an emailed statement to E&E News that the agency is not ready to name an acting state director to replace Perez.

But Perez’s departure this fall will leave BLM with only four permanent state directors: in Arizona, Utah, Wyoming and the Oregon-Washington office.

The other eight state directors, once Perez officially exits, will be serving on an acting basis, which has raised concerns, especially among members of Congress from both parties, about the accountability of those state directors overseeing millions of acres of public lands.

Sources said Perez — who earned a Bachelor of Science degree in forest resources management from West Virginia University — has wanted for some time to return to the service, where he has spent the bulk of his 30-year career as a federal employee.

After graduating in 1985, he worked a number of "temporary assignments" with the Forest Service before joining the Peace Corps, where he helped to establish a community nursery in Ghana, according to information from the service.

Perez, who also has a law degree from the Catholic University of America’s Columbus School of Law, returned to the service shortly after completing his stint with the Peace Corps. He has held a number of senior positions at the Forest Service, including national litigation coordinator in Washington, D.C., where he managed environmental lawsuits filed against projects on all national forests.

"The Forest Service hit a home run with this hire," said Steve Ellis, BLM’s former deputy director of operations, who retired in 2016.

Perez joined BLM in 2012 as director of the BLM Oregon-Washington state office; he took over as California state director for Jim Kenna, who retired in October 2015.

When Perez was named California director, former BLM Director Neil Kornze praised his "broad experience in natural resource management both with the BLM and the U.S. Forest Service."

But the Trump administration has made no secret of its desire to redirect BLM and the Interior Department’s core mission toward promoting oil and gas development and mining, and other revenue generation activities — and away from the Obama administration’s focus, critics say, on conservation.

This has caused tension, at times, among senior Interior Department leaders.

Perez’s departure from BLM, sources said, has nothing to do with his job performance or with any friction with Interior leadership over the management of public lands.

Indeed, Perez served a brief stint as BLM’s acting deputy director of operations in Washington during the first six months of the Trump administration.

"Jerry and I worked together in the Forest Service for many years," said Ellis, who helped recruit Perez to BLM. "He is very highly regarded and respected by career employees in both agencies."

Perez’s departure is the latest shakeup of BLM leadership in the past 14 months.

Interior last year removed three BLM state directors in Alaska, Colorado and New Mexico and reassigned them to different positions outside the agency, along with dozens of other Senior Executive Service employees at BLM and other Interior bureaus (Greenwire, June 27, 2017).

BLM still has no permanent director.

Steed is now listed on BLM’s organization chart as deputy director of policy and programs, "Exercising the Authority of Director."

Perez’s departure had been rumored for months.

Sources told E&E News last spring that Interior was considering moving Mike Nedd, at the time BLM’s acting deputy director of operations, to the California director’s position. The move was seen as a reward for Nedd’s work, while serving as acting BLM director, to help advance the Trump administration’s early mission to ramp up oil and gas drilling and coal mining on federal lands.

Interior officials had at least discussed the possibility of moving Perez to the state director’s position in New Mexico, a source said. That move was never made, and it’s unlikely Perez would have accepted such a transfer; remaining in California was a priority for him, a source said.

Instead, BLM in June moved Nedd back to assistant director of energy, minerals and realty management — a position he held prior to Zinke’s naming him acting BLM director in March 2017 (Greenwire, June 11).

Richard Cardinale, Interior’s director of the business operations division in the Office of the Chief Information Officer, was moved into BLM’s deputy director of operations position to replace Nedd.

All of these moves have occurred as Interior works to finalize a plan to move BLM’s headquarters from Washington, D.C., to a location out West, where the vast majority of federally managed lands are located.