More than warming. How a climate group became diverse 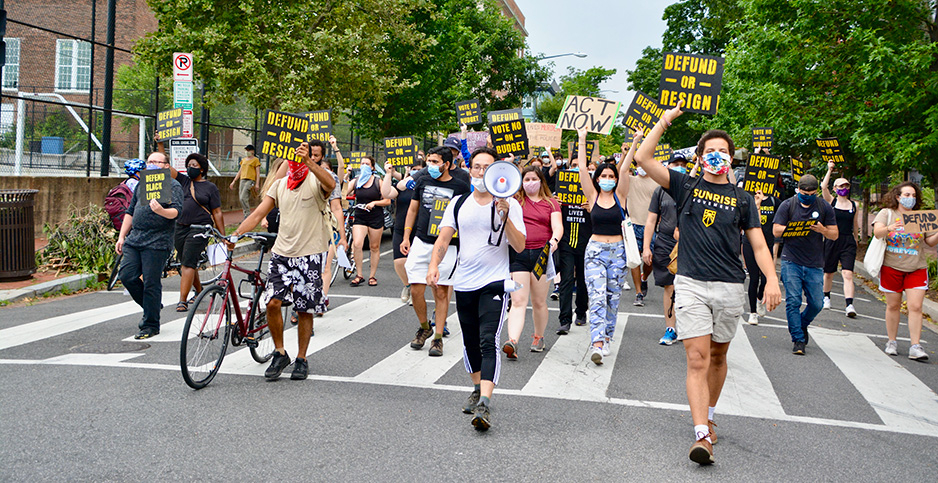 Activists with the Sunrise Movement joined with other protesters in a recent campaign to convince Washington officials to slash the city's police budget. Avery Ellfeldt/E&E News

It was a swampy evening when masked demonstrators gathered outside the home of a city lawmaker in Washington and demanded that he help slash the police budget.

Leading the way were activists with an unexpected affiliation: the Sunrise Movement, the youth-led climate organization that’s credited with catapulting the Green New Deal into the national spotlight.

At first, the protest against police brutality might seem off-point for an organization whose goal is to address climate change through a massive jobs program.

Yet a mission for justice — both climate and otherwise — has been a touchstone for Sunrise since day one, organizers said. It’s a characteristic they credit in part with catalyzing the group’s dramatic growth — and political success — over the last three years.

The protest outside the home of D.C. Council member Charles Allen exemplified that.

Sunrise first captured the nation’s attention in 2018, when newly elected Rep. Alexandria Ocasio-Cortez (D-N.Y.) joined activists for a protest in the office of House Speaker Nancy Pelosi (D-Calif.). It was a reward for loyalty. Sunrise had supported Ocasio-Cortez in her primary against Rep. Joe Crowley (D-N.Y.). On the heels of her upset victory, she was doing the same for the group.

The sit-in went viral, Sunrise made headlines — and the movement took off.

A Sunrise spokeswoman said she could not provide exact figures about the group’s membership or how its size and reach has fluctuated since its founding in 2017. The organization doesn’t require formal membership on a national scale, she said, so it’s difficult to track.

Other metrics point to rapid growth.

Over the last three years, Sunrise activists have launched more than 380 local "hubs" in all 50 states. The organization’s email list grew threefold, the spokeswoman said. And in 2019, the group deemed some 10,000 people "active members," which made them eligible to participate in a movementwide vote to determine which presidential candidate Sunrise would endorse.

Social media metrics echo that boom. This year, the group’s Twitter following jumped 50% to 209,000 followers, while its numbers on Instagram have leaped by 200% — surpassing 119,000 followers.

Aracely Jimenez-Hudis, Sunrise’s deputy communications director, said she thinks the organization ballooned so rapidly because it is uniquely poised to reach "young people as they’re getting politicized for the first time, and offers them a political home that goes beyond voting and elections."

That’s especially true, she noted, during "moments of overwhelming crisis," when the impacts of systemic oppression are on full display.

To be sure, Sunrise is far from the first movement to highlight these issues — a reality the young organizers are fully aware of. They emphasized that Indigenous communities and people of color have spearheaded the fight for climate justice throughout history.

The Rev. Lennox Yearwood, founder and president of the Hip Hop Caucus, said the same. But he also noted that the mainstream environmental movement has long been a "toxic place for Black people and people of color."

So when it comes to newer, youth-led organizations that proactively center on different voices, "you see what a movement would look like if it would even begin to have more diversity and equity," Yearwood added.

Haskett, of the D.C. hub, agreed. While the local chapter has seen robust growth since the start, there’s been an "explosion" of interest in recent months. He associated the spike with the protests that began after Minneapolis police officers killed George Floyd, a Black man, on May 25.

"People felt powerless, and they wanted a way to get involved," Haskett said. "That is what organizations provide. And that has increased our capacity."

Organizers said the movement’s focus on the ways that climate change disproportionately impacts vulnerable communities has played a key role.

"We’re not just talking about ending climate change and bringing good jobs. We’re also talking about a society where policing and prisons don’t exist like they do today," Naeem Alam of the D.C. hub said in an interview. "If we don’t have liberation, then in the view of most Sunrise members I’ve spoken to … that’s not a future that they want."

In May 2017, Sunrise founding members Varshini Prakash and Dyanna Jaye said in a post on Medium that President Trump’s election solidified the group’s political strategy: "We’ve gotta figure out how to win some elections," they wrote.

So the organization began throwing its weight behind particular Democratic candidates leading up to the 2018 midterm elections. Each of the politicians it chose not only endorsed the Green New Deal, but also took bold stances on issues including abolishing U.S. Immigration and Customs Enforcement and implementing universal health care.

Ocasio-Cortez and Sen. Bernie Sanders (I-Vt.) — who dropped out of the Democratic presidential race in April — were among them.

"They took on Nancy Pelosi, and they weren’t afraid to take on the old guard. And I think that was different," said Yearwood, adding that the newly elected Congress and Ocasio-Cortez’s victory were "essential" to the movement’s trajectory.

Sunrise emphasized on its website that Bowman, a public school teacher, has been a community leader in the Bronx for decades and has marched in the streets alongside New Yorkers "in the wake of George Floyd’s murder." For these reasons and more, Sunrise mobilized its networks and made 850,000 calls to constituents on Bowman’s behalf.

On the heels of victory, Bowman praised the group in a Twitter post: "The @sunrisemvmt is one of the most powerful progressive organizations in America and has already changed this country and the world. Their power comes from being grounded in love. I can’t wait to continue growing the movement for a Green New Deal alongside you."

In February 2019, Ocasio-Cortez and Sen. Ed Markey (D-Mass.) formally introduced the Green New Deal — which calls for a "fair and just transition" — as a nonbinding resolution. Later, during Democratic presidential debates, the Green New Deal would also become a litmus test for presidential candidates, many of whom eventually endorsed the proposal.

Andrés Jimenez, the executive director of Green 2.0, an environmental diversity initiative, said the climate movement has always been overwhelmingly white. As a result, he added, mainstream climate groups have tended to "shy away" from issues that aren’t laser-focused on the natural environment.

But Sunrise organizers "aren’t your typical environmental folks," he said — and that’s a good thing.

Every Sunrise organizer interviewed for this story said that one of their core principles is to align climate advocacy with the work of other movements for justice — including Black Lives Matter.

Lehman said that’s due in part to the reality that both the Green New Deal and calls to defund the police are asking politicians to do the same thing: "Stop spending money on the things that are killing us."

The group’s approach has given it a capacity to build a movement, find new partners and amass political power, Jimenez said.

"The fact that they are opening up and talking about different issues … is only going to make them stronger," he said. "And guess what? People are paying attention — whether they want to or not."