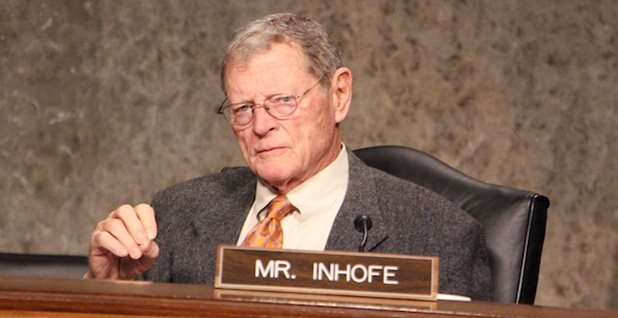 Environment and Public Works Chairman Jim Inhofe is the Senate’s best-known global warming skeptic — and he’s proud of that.

The Oklahoma Republican is the author of a book about climate change, "The Greatest Hoax: How the Global Warming Conspiracy Threatens Your Future," and he’s not afraid to combat publicly about climate science with administration officials and his colleagues on Capitol Hill. But he counts many of his opponents as friends, including his longtime policy sparring partner Sen. Barbara Boxer (D-Calif.), the top Democrat on the EPW committee, who’s retiring at the end of this term. This week, Inhofe and Boxer joined forces to shepherd a major water infrastructure bill, the Water Resources Development Act, across the finish line in the Senate.

Inhofe even likes Sen. Bernie Sanders (I-Vt.), who’s as far to the left as Inhofe is to the right.

WOTUS [referring to the Obama administration’s Waters of the United States rule]. I like the way WOTUS sounds. Because when I see WOTUS, I see flowing water rushing through, and I see the federal government rushing in to destroy the states’ ability to do what they’ve been doing for 200 years, and that is taking care of the jurisdiction of water within their states.

There’s a lot of talk about congressional dysfunction right now. Is it still fun to be a member of Congress?

Yeah, because in my committee … we’re the committee that gets things done. And not just the highway bill, which was the first one in 17 years, a long-term reauthorization, and not just the chemical bill that’s been 40 years in the making. … Then they’re saying, well, you’ll never get the WRDA bill done in this work period. … We did get it done. So it shows that things are getting done.

I’d rather answer the question, I have some surprise friends. I consider Barbara Boxer a friend. … We know each other well, we know where we violently disagree with each other, but we don’t let that stand in the way of the very large area of infrastructure where we do agree. So we shock a lot of people. It’s surprising to a lot of people — going back to the early global warming days when [Democratic Massachusetts Sen. Ed] Markey was in the House. … When we’re together, we always rejoice when there’s something we agree on. … Bernie Sanders actually said on CNN, when they asked him a question, is there any conservative Republican that you get along with you like? He said, "Yeah, Jim Inhofe." Then he hesitated and said, "I don’t think I just did him any favors." There are a lot of hypocrites in the Senate on the Democrat side, those who vote liberal and press release conservative, because most of the people back home are much, much more conservative than the party Democrats. But not Bernie Sanders, he is what he is, and he’s not ashamed of it.

How do you think Sen. Boxer’s retirement will change the EPW Committee?

[Delaware Democratic Sen.] Tom Carper under the Democrat rules, I think, is going to go ahead and take that. However, I would not be the chairman, because my six years are expiring with this year. … I think probably, I’m assuming now that a Republican is in the White House. That being the case, all the constructive things that we could do — and by constructive, I mean doing away with a lot of the killer regulations — we can do with a majority, but we don’t have a veto-proof majority. Assuming we have a Republican in the White House, we can do all of these things that need to be done, all the regulations that are so putative in nature. So I look for that to happen. That’s assuming that we have a Republican majority and Trump in the White House.

You’re often called a global warming skeptic. What do you think about that term?

I think it’s a proper term. I think the best way to do it is say, "Do I believe that the world’s coming to an end because of emissions from man?" And that’s no. And it’s absurd. … People know that the science is questionable, but what isn’t questionable is the cost; it’s going to cost a lot of money. So you’re not a climate denier, because climate is there, … climate is always changing, … it always will be changing, it’s not as a result of man, and why are we so arrogant to sit back and assume that we’re so powerful we can change climate?

The Hawk ‘n’ Dove is convenient for where I stay when I’m up here. … That and La Lomita are the two. La Lomita because I’m from a part of the country where they have real Mexican food, and it’s really as good as any place in Oklahoma. It’s really good.

What’s your favorite source for news?

You have a dog. What’s your dog’s name?

Mutt 2. … Twenty years ago … I was going into a one-store town, I saw something partly covered in snow, and I thought it was a rat. I almost ran over it. But I stopped, and I looked at it, and it’s this little dog. So I went into the only store in town and put a sign up. … It said, "Black and brown hound dog pup," and I posted it in the store. I got my stuff, went back home, where Kay, my wife, picked it up, looked at it and made me go back and take the sign down. That was Mutt 1. Mutt 1 lived 16 years, and then Mutt died. … Then about four years later, which was two years ago, another one exactly like that — it must even be related — wandered up as an abandoned dog somebody either threw away or stop and fixed a flat and something happened, so that’s Mutt 2. … Mutt 2 is a great little dog. … I go everywhere with Mutt — Mutt 2.

What’s something not many people know about you?

My activity in Africa is one thing that they’re not aware of. … I’ve made 144 African country visits. What I do is I handle all of the stuff with the Armed Services Committee on the continent of Africa, because I know them all. … What else? They know I fly airplanes upside down.

All the time. When I’m in Oklahoma, I fly almost every day.

I’ve got planes that do that. But I also have big planes that I fly. That’s for transportation, taking people around the state.

Your middle name is Mountain. What’s the story behind it?

People that I know they know better, and take a position because they think it’s something that they need to take in order to get re-elected. They’re concerned about their ratings. … I’ve been rated as the most conservative member, every once in a while I am. Then we get into infrastructure and things like that, and all of a sudden my ratings go down, but it doesn’t make any difference. So I think a lot of people live by polls, and that does bother me.

There was speculation last time around that you might not run again. Do you think you’ll run for another term?

I know people who are old at 60, and I don’t do things any differently now than I did when I was 60. In fact, it was my 60th birthday when I was sworn in to be in the Senate. If that doesn’t change, I have no plans to retire.