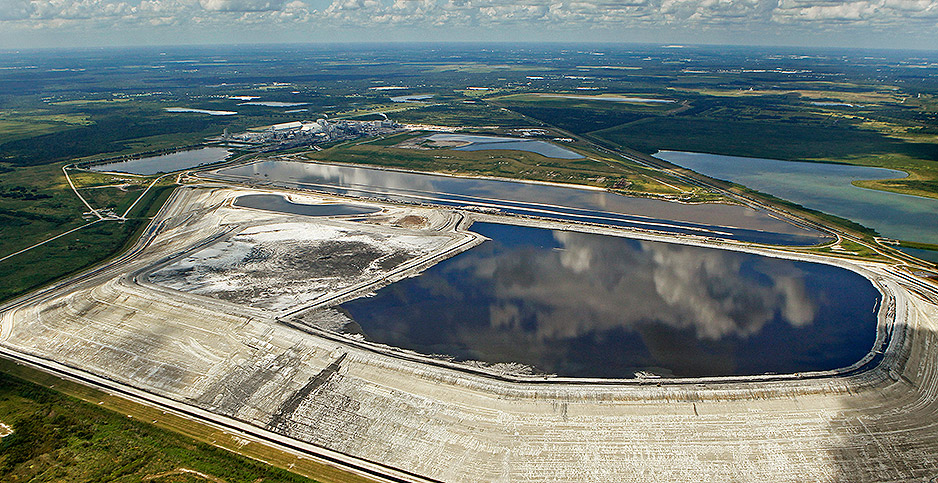 A sinkhole (left) opened up in Mulberry, Fla., underneath a gypsum stack at a Mosaic Co. phosphate fertilizer plant in September 2016, sending 215 million gallons of contaminated water into the Floridan Aquifer. Jim Damaske/Tampa Bay Times/Associated Press

These substances are byproducts of fertilizer manufacturing, an industry powered by Florida’s massive deposits of an important crop nutrient: phosphate.

Most are kept far enough away from Gulf beaches and city centers that it’s easy for residents to ignore the imposing dumps. But in 2016, disaster struck a gypsum stack in Mulberry, Fla., in the form of a 150-foot-wide hole in the earth.

A sinkhole underneath a stack operated by phosphate giant Mosaic Co. opened up and sucked 215 million gallons of contaminated water into the Floridan Aquifer, mixing with the region’s source of drinking water.

"The aquifer is like Swiss cheese, so it’s all interconnected. Contaminants can move extremely fast through the aquifer system," said Robert Brinkmann, author of the book "Florida Sinkholes: Science and Policy" and a geology professor at Hofstra University.

"It’s still there, it’s still highly acidic, it’s still radioactive, and nobody can figure out what to do with it," Andre Mele, director of the Suncoast Waterkeeper, said about one gypsum stack in Palmetto, Fla.

EPA mandated in 1989 that fertilizer companies store their gypsum in stacks because no one had thought up a better alternative to getting rid of the radioactive waste. Today, where there’s a phosphate fertilizer plant, there’s a gypsum stack.

"It’s not a matter of if but when these sinkholes happen," Lopez said.

Over millions of years, rainwater erodes the limestone, forming underground caverns that are susceptible to falling in, especially if there’s a structure on the surface, explained David Wilshaw, a geologist who runs a ground risk management business in Florida.

"If you change the stress on the soil by adding a building or something heavy such as a [gypsum] stack, then that changes the dynamics below ground," Wilshaw said. "It increases the amount of stress and strain the soil and rock that’s sitting above the void feels."

The area on Florida’s Gulf coast from Tampa to the Georgia border is known as Sinkhole Alley because cavernous limestone is so common. Some of Florida’s gypsum stacks lie in that area, while others are farther south, where a thicker layer of soil acts like a buffer above the limestone.

"It’s always a risk when you have a region of the world where sinkholes are common to put that much weight on top of the surface," Brinkmann said.

This precaution, which Barron said hasn’t been implemented yet and has never been used in this way, would be in addition to hundreds of monitoring wells Mosaic uses to sense changes in groundwater levels.

FDEP also requires gypsum stacks to have plastic liners meant to stop waste from seeping into the soil. A liner was in place at the time of the 2016 sinkhole but couldn’t prevent wastewater from pouring into the aquifer.

"With the projected increase of intensity of hurricanes and storms for our region, it’s a scary scenario," Lopez of the Center for Biological Diversity said.

FDEP hasn’t updated gypsum stack regulations since 2006, when it issued a rule mandating that earthen dikes be strong enough to hold pond water during times when 12 inches of rain falls in a 24-hour period.

Barron said the sprayers are widely used in the industry to enhance evaporation. Mosaic’s data, she said, shows the sprayers don’t pose any risk to the surrounding communities because their emissions don’t surpass air quality and health standards.

Residents living near Mosaic’s gypsum stack in the heart of Louisiana’s Cancer Alley fought against the company’s proposal to install sprayers at its facility in St. James Parish, the London Guardian reported last year.

"It’s just rearranging, basically, the deck chairs on the Titanic," Lopez said. "You’re either exposing people to risk because there’s a failure through a sinkhole, or you’re scooping up all that waste and putting it in the air."

But for now, Mosaic’s three remaining active gypsum stacks will continue to grow.

"Gypstacks and the effects of phosphogypsum will continue to exist so long as, and to the extent that, Florida and the EPA allow — regardless of the Corps’ permitting decision," the decision said.