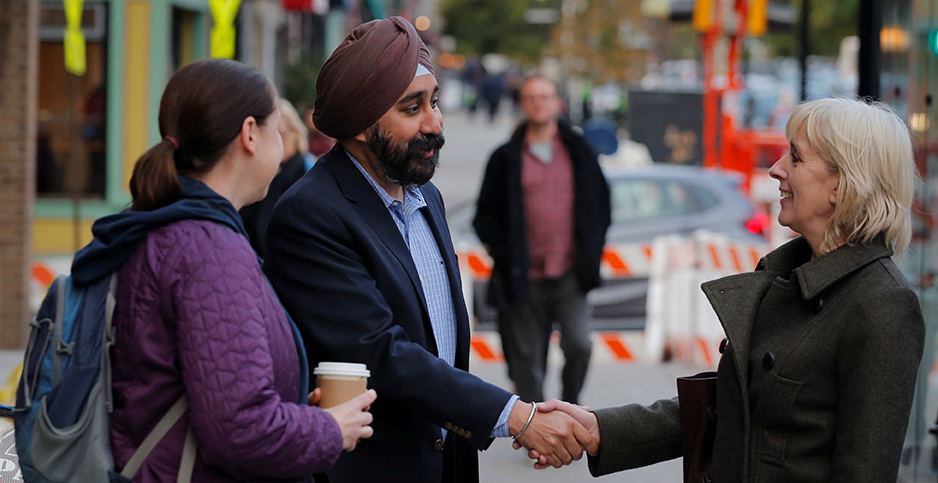 Mayor Ravi Bhalla of Hoboken, N.J., (second from left) was one of several state and municipal officials to take legal action this month against oil and gas companies for climate harms. Lucas Jackson/REUTERS/Newscom

Climate lawsuits against the oil industry are popping up in courts across the country, and experts see this month’s succession of new filings from state and local officials as a sign of more to come.

Environmental advocates often compare the growing body of climate misinformation suits to litigation against the tobacco industry, which eventually forced four major cigarette companies to amend their advertising campaigns and shell out more than $206 billion over 25 years to 46 states, five territories and the District of Columbia under the terms of a 1998 master settlement agreement.

"The claims in these climate cases could dwarf that," said Vermont Law School professor Pat Parenteau.

Though the climate cases aren’t likely to morph into Big Tobacco-style litigation in the near future, some say the recent uptick in climate filings is an increasingly large pressure point for oil and gas companies.

Their complaints — which joined more than a dozen others — all allege that the industry engaged in a long campaign of coordinated deception about how fossil fuels contribute to global warming. The lawsuits target producers and trade groups like Exxon Mobil Corp., Chevron Corp., BP PLC and the American Petroleum Institute.

Proceedings in the cases are typically marked by lengthy jurisdictional battles over whether state or federal courts are the proper venue for the complaints. While industry attorneys have set their sights on federal benches, judges have largely kept the cases in state courts, and Parenteau said the drawn-out fights are bound to add financial burden to embattled energy companies.

"These are big, wealthy companies for sure," he said, "but at some point, they may decide to cut their losses."

Oil companies and their allies continue to argue that the cases are veiled political efforts meant to curb oil and gas production and wage battles over emissions that are best left to the legislative and executive branches.

Yet even a turnover in the White House next year isn’t likely to stanch the flow of climate challenges, said Alice Kaswan, a law professor at the University of San Francisco.

State officials are seeing the growing wave of lawsuits and want to dive into the fight sooner rather than later, she noted.

"What is there to lose, really?" she said. "I mean, you could lose the case, but you might as well try to make some effort to address the cost that your jurisdiction is likely to experience rather than just sitting back and waiting and seeing how things play out."

The state and city leaders that joined the climate litigation movement this month say they have been incubating their lawsuits since the moment they took office, observing and learning from a steady flow of similar challenges dating back to 2017.

Delaware Attorney General Kathy Jennings (D) told E&E News that she knew she wanted to take action "from day one" of her now almost two-year tenure.

"We have been looking at the other lawsuits that AGs have filed, as well as subdivisions, cities and counties … and we do talk about major lawsuits, there is no doubt about it," Jennings said.

Mayor Ravi Bhalla of Hoboken, N.J., said his decision to launch a lawsuit this month was also inspired by the growing movement.

"The cumulative effect led us to the conclusion that now was the right time to file suit ourselves, but hopefully generate additional momentum for other jurisdictions to also file suits," he said.

Complaints from early challengers like Oakland, Calif., and Baltimore hinged on public nuisance and product liability arguments, but consumer protection and anti-fraud laws have been the weapon of choice this year.

In an interview ahead of his lawsuit announcement last week, Connecticut Attorney General William Tong (D) said his state’s consumer protection law makes his case particularly strong because it places no statute of limitations on records requests.

Connecticut’s statute "is what enables us to go back to the 1950s and to investigate and uncover what Exxon Mobil knew about climate science and how they engaged in a campaign to deceive us and to conceal that science," Tong said.

Despite the comparison of climate lawsuits to the major tobacco litigation of the mid-21st century, experts say there is not yet cause to hope for the next Big Tobacco-style battle royal.

Right now, states and municipalities are leaning on their own distinct consumer protection and fraud laws, partly because climate damages are so different for every state.

Parenteau says that’s where the tobacco comparison breaks down.

The tobacco industry "was affecting individuals in their respiratory systems, their cardiovascular systems, whereas the climate damages … differ significantly," he said.

"Even in terms of things like sea-level rise or storm surge, those damages and impacts and how you’re going to respond to them are going to vary enormously."

Professor Karen Sokol of Loyola University, New Orleans, said that the growing landscape of distinct state and local complaints does help paint a cohesive picture of how the consequences of climate change are playing out differently across the country.

The lawsuits will continue to become more robust as climate impacts like worsening hurricanes and this month’s massive wildfires in California reveal more about what it will take to respond to the effects of warming temperatures, she added.

"It’s just going to be interesting to see what these different state legal systems do," she said.