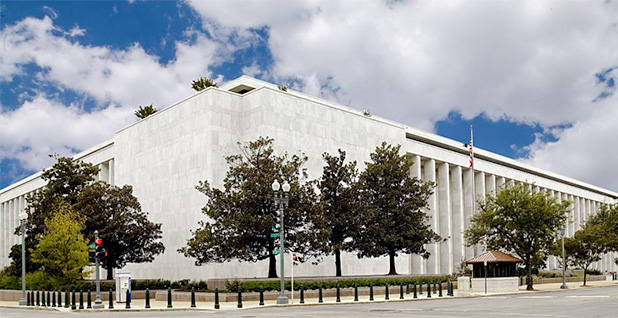 Reports produced by Congress’ in-house think tank, long relied upon by lawmakers for research and policy advice, will soon be accessible to a much wider audience, expanding the agency’s reach and influence, but also increasing its visibility and, likely, its critics.

Last week, Congress included a provision in its omnibus spending package requiring the Congressional Research Service to make its reports open to the general public, not just Capitol Hill.

CRS is already taking heat from an inside-the-Beltway circle of current and former employees who argue that in an effort to dodge partisan politics and scorn, the agency fails to provide objective, expert and reliable analysis to lawmakers, often in the realm of climate science.

The move to expand access to CRS reports could invite increased scrutiny of an agency that generally tries to avoid the spotlight and force the research service to grapple with how it handles controversial topics such as climate change.

Alexandra Wyatt, a legislative attorney with CRS’s American Law Division, said while researchers within the agency who produce reports on climate change do a "good job" dismissing arguments that global warming is not primarily anthropogenic, she said they are often too timid in their assessments.

"I just think some of the ways they end up going about talking about climate change don’t necessarily objectively reflect the scale of the issue and the real impacts that are in play," she said.

CRS’s core mission is to provide members of Congress high-level "analysis, appraisal and evaluation" of proposed legislation without partisan bias. But as controversial issues in the Trump administration continue to widen the partisan divide, observers say the agency is failing to offer expert conclusions in an attempt to sidestep party politics and bias, a move that could have the opposite impact by increasing misinformation and lending validation to falsehoods, they say.

Steven Aftergood, director of the Federation of American Scientists’ Project on Government Secrecy, said the CRS is in a tricky position. For CRS analysts to delve into the merits of a controversial position and render a judgment is ideal, but it also opens them up to extreme derision from detractors, he said. On the other hand, the decision to avoid using their analytical skills and expertise can be endlessly frustrating.

"That’s the conundrum," Aftergood said. "The fact that CRS authors are typically experts in their field means they are exceptionally well-qualified to render a judgement, and it is a source of professional frustration to pretend there is a range of valid opinions on some issues."

At a CRS sponsored seminar last spring, Wyatt deviated from her preapproved script and described the scientific consensus behind the risks posed by climate change and the existence of a countervailing science-denying opposition.

She later received a counseling memo from the CRS front office strongly condemning her actions.

"I find it exceedingly distressing that CRS management would not have the backs of their in-house experts," said Kevin Kosar, vice president of policy at R Street Institute and a former CRS employee.

"A CRS analyst could write the sky is blue and someone is going to complain about it," Kosar said. "You can’t flinch every time somebody gets mad. It kills morale, and it kills the ability of analysts to do their jobs if they have to not make expert judgments."

Wyatt and a handful of former CRS analysts, including Kosar, sent a letter to the agency’s leadership earlier this year stating their concerns and urging CRS to take advantage of its unique position to draw expert conclusions by recalibrating its "objectivity practices."

In response, Wyatt said she was handed a copy of CRS’s existing objectivity policy and has not heard anything from leadership since.

In the letter, Wyatt and others write that while "whirlwinds of information and disinformation threaten democracy," CRS has the ability to sort out the truth.

"As you know, the current climate of ‘alternative facts,’ ‘fake news,’ conspiracy theories, and declining trust in a common reality poses problems for the United States’ political system. While technological and social trends increase the need for information literacy, people across the political spectrum do not know where to turn for reliable information," they wrote.

"Many end up in polarized ‘bubbles.’ These trends threaten democracy, in part by eliminating shared factual grounds on which people and their legislators can debate, compromise, and seek consensus," says the letter. "In this climate, CRS’s mission has never been more vital."

Stephen Dagadakis, head of the Congressional Programs and Communications Office at CRS, declined to address any of the specific criticisms levied against CRS on the record. In an emailed statement, however, he cited the distinction between making expert judgments about the likely consequences and implications of policy decisions and advocating for certain policies, the latter of which CRS does not do.

"CRS stands by its commitment to providing Congress with research and analysis that is authoritative, objective, and nonpartisan on the full range of public policy issues," he wrote.

Climate change caught in the middle

In the letter, Wyatt said that CRS appears to avoid reaching conclusions in topic areas with potential for political controversy, instead operating as a neutral compiler of facts and opinions.

"Yet these risk-avoidant strategies, while certainly understandable, could in fact increase other risks such as under-utilizing CRS’s valuable personnel; contributing to polarization; and, ironically, inviting a perception of partisan bias," she wrote in the letter.

Aftergood said climate change is a prime example of the type of political challenges CRS faces due to the heated nature of the debate. While the scientific consensus states that global warming is primarily caused by humans and is leading to the destabilization of the climate, the Trump administration questions the severity of the issue. President Trump has called climate change a Chinese hoax.

"Climate change is a good test case of [CRS’s] ability to go beyond the politics of the issue and to endorse the scientific consensus," Aftergood said.

Wyatt said CRS has the power to either shape or reinforce narratives within Congress, and so by appearing to treat "climate alarm" as controversial and nonobjective, it bolsters the assertions of those who would prefer to not act on climate change over those who recognize the scale of the problem, she said.

"There are important connections to be made about the reality and scale about climate change risks that are totally objective, but that I personally perceive CRS to have been too hesitant to say due to fears of criticism from the — I’ll just call them — anti-climate folks," she said.

In the letter, Wyatt cites the treatment of climate change as an example of how in some cases "shallow, disjointed, or euphemistic treatment of an issue" acts as a disservice.

While CRS did highlight the issue as a "Hot Topic" and published "superb" products on it, the agency did not connect the dots for Congress on the real-world effects of global warming, which could bias the debate toward inaction, she wrote.

"More fundamentally, the vast scale of climate change risks and the influence of climate misinformation are objectively verifiable facts," she wrote. "CRS must not mute them for political reasons."

Wyatt acknowledged scientific process can be flawed but urged CRS to defend the best-available processes that bring people closer to objectivity and truth.

"For example, climate change is established not by any red team-blue team debate, nor electorally, but by the scientific method. Budget scores are established by transparent and tested models that do not change based on party," she wrote.

A ‘soul-crushing’ history of avoiding risk

Kosar said CRS has a history of avoiding risk, which has led many analysts to jump ship. A job at CRS is a "wonderful position," he said, where you can make tenure after one year of employment and, as an analyst, enjoy a potential $150,000 salary without having to manage anyone.

"Nonetheless, the place is hemorrhaging employees," he said. "People are leaving; people at the top of the agency who are dissatisfied with present leadership. Analysts have left, reference librarians have left, other support staff have left."

Kosar, who worked at the agency from 2003 to 2014, said he left in part because he found he had fewer and fewer opportunities to utilize his expertise.

"Part of it is that Congress increasingly uses CRS has a kind of help desk," he said. "It’s also the case that CRS is affording its employees fewer opportunities to do deep research … because these are salient things that might attract political controversy."

Kosar, who detailed in a 2015 article how congressional dysfunction led him to quit his CRS job, said the agency’s timidity coincides with the internet.

When internet use became more common about 20 years ago, CRS reports went from being hard copies that were read by a small handful of Hill staffers to widely spread stories in outlets like The New York Times, he wrote in a blog post last month.

"The arrival of the World Wide Web, smartphones, and the bitterly contentious environment on the Hill, as I described elsewhere, slammed CRS," he wrote. "The once insular agency found its staff being trashed by legislators, media, and bloggers. All for doing their jobs."

In response, Kosar said CRS tried to make its work less visible and therefore less vulnerable to public derision. While neutrality and invisibility help the agency avoid controversy, it is "soul-crushing" to staff, he said.

Wyatt agreed the pressure to avoid controversy adds some stress to her daily work.

"I’m not the only person who feels this general way about CRS’s approach to some controversial topics, but there hasn’t been a lot of coordinated or vocal discussion," she said.

In its latest annual report, CRS touts abundant new and updated products but does not go into detail about how it is adapting to the heightened partisan nature of Congress or the challenges it faces as senior analysts retire.

Kosar said he does not see the situation improving any time soon.

"There’s little evidence that Congress itself is becoming less polarized, there’s little evidence that the media cloud around Congress is becoming less polarized and there’s no sign whatsoever that the agency’s leadership is willing to stand up and have the backs of CRS analysts when they write about controversial issues," he said.

Kosar said Congress’ move to open CRS reports to the public will ameliorate years of "obstruction."

"Now the public — not just lobbyists will be able to learn about government programs and policies through these invaluable nonpartisan reports," he said in an email.