Mr. Congeniality: How Perry uses charm to stay out of trouble 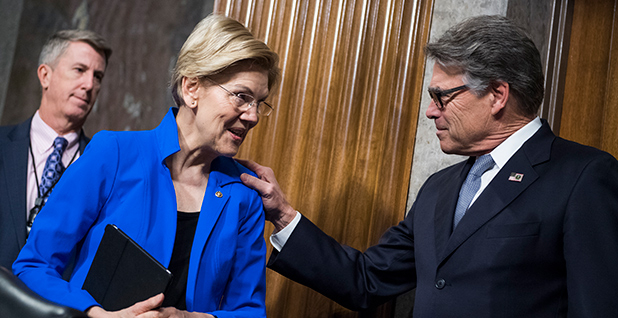 The Florida Democrat, one of the House’s most high-profile Trump administration critics, set out on a line of questioning meant to scold Perry for a proposed 86% cut in DOE’s Office of Energy Efficiency and Renewable Energy as "an abandonment of U.S. energy leadership."

After Perry offered a half-hearted defense that the budget request’s focus on battery storage research would prove more beneficial than a broader top-dollar spread around EERE, Wasserman Schultz accused the former longtime Texas governor of a "Texas two-step" in his answer.

The exchange had all the makings of a bitter back-and-forth much of the Trump administration has come to expect from Democratic oversight.

But Perry quickly defused the question. "Well, I was just trying to waltz with you," the former "Dancing With the Stars" participant said with a sly smile.

The joke brought a chuckle from the room, including Wasserman Schultz, who commented that she "enjoys it," adding that she does "it backward, in high heels, like Ginger Rogers."

And after a brief acknowledgment that the Department of Energy will implement what Congress appropriates, it was over, with both Republicans and Democrats finding what they wanted from Perry.

That fine line Perry achieved is representative of a broader trend that has made Perry one of Capitol Hill’s most popular and enduring Trump Cabinet members as he embarks on year three of his tenure atop DOE.

Unlike former EPA Administrator Scott Pruitt and ex-Interior Secretary Ryan Zinke, Perry has managed to avoid the ethical baggage that eventually dragged down both men.

But for all his appeal and personality, that likability will be tested under a Democratic House determined to investigate all of Trump’s policy changes.

Perry’s Capitol Hill supporters credit his success as Energy secretary to the 14 years he spent as governor of Texas, a state considered home to the U.S. oil and gas industry, but one that also leads the country in production of renewable wind power.

Sen. Joe Manchin (D-W.Va.), who has been friends with Perry since both men were governors, said the challenges of being chief executive of a state are great preparation for a Cabinet-level job.

"Rick is open, he’s pragmatic," Manchin said. "Every governor has to be pragmatic; it’s not as political, because as governors, we don’t look at things as a Democrat or a Republican idea and can you help or hurt this person. How do you fix the problem you’ve got? So Rick still has that mindset."

A key part of the success is his effort to manage those lawmaker relationships.

Perry has been a frequent visitor to Capitol Hill. In total, Perry has appeared before a congressional panel 14 times, which would put him as one of the leading Trump officials appearing before Congress.

He will add one more when he appears before the Senate Energy and Natural Resources Committee this morning for his fourth defense of the fiscal 2020 budget request.

"Secretary Perry understands that the Department of Energy cannot succeed without the support of Capitol Hill," said DOE spokeswoman Shaylyn Hynes. "That is why over the past two years he has engaged extensively with members of both parties to build strong bipartisan support for DOE’s vast mission."

That effort extends to the road, too.

During his two years in office, Perry has visited all 17 national laboratories, in addition to other travel as part of his official duties. Those trips, DOE said, are always accompanied by an invitation to the state’s lawmakers to join the tour.

While in Ukraine in November of last year, Perry attempted to call incoming House Energy-Water Appropriations Subcommittee Chairwoman Marcy Kaptur (D-Ohio) for her insight on the country — a familiar topic for the two — although they were unable to connect.

And sometimes the congressional outreach even features a dinner party.

When visiting Idaho, he went to Simpson’s home for a barbecue party, where the congressman says he introduced Perry to his dog, Charley, who originally hailed from Perry’s home state.

When in Alaska, Perry ate dinner with Senate Energy and Natural Resources Chairwoman Lisa Murkowski (R-Alaska) and her husband at their home in Anchorage.

Perry is "such an easy guy to talk to," she said.

Murkowski acknowledged that Perry — who served three terms as Texas governor and ran for president twice — comes from a "more political" background than his predecessors in the Obama administration: Steven Chu, a Nobel Prize-winning physicist, and Ernest Moniz, a Massachusetts Institute of Technology physics professor who had served in the Clinton White House and DOE before returning to take the department’s reins in 2013.

"You had Ernie Moniz, total brainiac, Steven Chu, total brainiac," she said. "And it’s not that Perry isn’t a learned man, but he’s not afraid to say, ‘I don’t know so much about that; let’s find out.’ And I like that because it’s so human and honest."

Even critics acknowledge Perry’s personal charisma, but it does have its limits.

"Personality and sizzle run short eventually; we’re here to make legislation, make laws, and we haven’t agreed to much," he added. "I’m looking forward to moving beyond the beginning of our relationship and having substance."

Sen. Martin Heinrich (D-N.M.), who voted against Perry’s confirmation and describes his tenure as Energy secretary as a "mixed bag," offered similar praise and criticism.

"You don’t get to be governor of a big state if you don’t have the talent and emotional intelligence to know how to engage with people," Heinrich said.

The New Mexico Democrat said he’s had little personal interaction with Perry besides a phone call or two, but lauded his support for the national labs.

"He’s been out to New Mexico, and I appreciate that," Heinrich said. "And there are times when I think the administration comes at problems from a little too much of a political lens and not enough of a technical, sort of science lens."

As an example, Heinrich pointed to DOE’s push to help faltering coal and nuclear plants, which have struggled to get off the ground (Greenwire, Oct. 16, 2018).

"The Department of Energy is one of those places where you can never get around physics and economics," he said. "I think there have been some cases like that where they’ve learned that you just can’t push on a rope."

‘Bailing out’ coal and nuclear

Perry’s role in the Trump administration’s efforts to help coal and nuclear plants has raised eyebrows across the political spectrum, engendering opposition from longtime allies like the oil and gas sectors, as well as renewable interests.

Despite the grumbling, Perry appears to have avoided any political fallout from the bailout push; his name continues to be mentioned as a possible successor to other Cabinet officials, despite continuing to provide fuel to critics of the proposal.

Last August, for instance, Perry was criticized for remarks at a national lab in Colorado, when he endorsed government intervention in energy markets.

"We do it by tax policy, we do it by regulations, we do it by permits. Pick good! Be smart!" he said. "Use the right kind of technical people to help you decide where to invest, and pick winners, and pick ’em good and pick ’em right. Government is going to continue to do that," he said (Greenwire, Aug. 15, 2018).

The comment caused heartburn for one close Perry friend and ally: former House Energy and Commerce Chairman Joe Barton (R-Texas), who has known Perry since both were running for public office in 1984.

"He’s a great guy and a good friend," Barton said of Perry during an interview with E&E News last year in the closing weeks of his own congressional career, but added, "He probably shouldn’t have said that."

He said Perry had never asked his opinion about the proposal to help coal and nuclear plants but suggested it may have been the result of the former governor’s relative inexperience operating in Washington, D.C.

"When he got to Washington, he had never been here," Barton recalled. "His experience was in Austin. And Rick is an activist guy — you show him a problem, he wants to solve it."

Ultimately, Barton said he opposed the plan for running counter to the free-market principles that he said guided his own congressional career.

"If you’re a true free-market person, theoretically you’re indifferent to whether it’s coal, nuclear, wind, natural gas or whatever, as long as it’s a real market," he said.

During three appearances on Capitol Hill last week, Perry did not mention the coal-nuclear bailout — nor was he asked about it.

But in an appearance at the Plant Vogtle nuclear construction site in Georgia last month, Perry offered a full-throated defense of the federal government’s support for nuclear, which includes nearly $12 billion in loan guarantees for the project.

"This is clean; this is American," he said, later adding, "Having an energy source that is reliable, there’s only two sources of energy that are on-site and uninterruptible: coal and nuclear."

While much of the criticism of Perry has focused on the coal and nuclear bailout, other problem areas have emerged, as well.

Nevada lawmakers alleged that Perry and DOE officials had misled them about a "secret" shipment of weapons-grade plutonium to the Nevada National Security Site over the state’s objections.

Other lawmakers have complained about the pace at which DOE has issued grant funding for programs in EERE and the Advanced Research Projects Agency-Energy, although much of that confusion came as part of Perry’s first year in office.

But even those criticisms appear to have brushed off Perry as he worked damage control, including a talk with Nevada lawmakers about the plutonium shipment and ensuring those funding dollars get awarded.

"In order to be an effective advocate for the department, Secretary Perry keeps an open dialogue with committees and members of Congress who touch matters of energy security, science and national security," DOE’s Hynes said.

For now, Perry has avoided much of the poor congressional relations that have plagued other Trump officials — and it’s making his job a lot easier.

"I would say that he’s a very engaged secretary," said Kaptur, the chairwoman of the Energy-Water spending subcommittee. "He’s an affable gentleman, and he’s able to communicate effectively to Congress. … He knows that you have to have compromise to move anything, so I think he’s realistic."