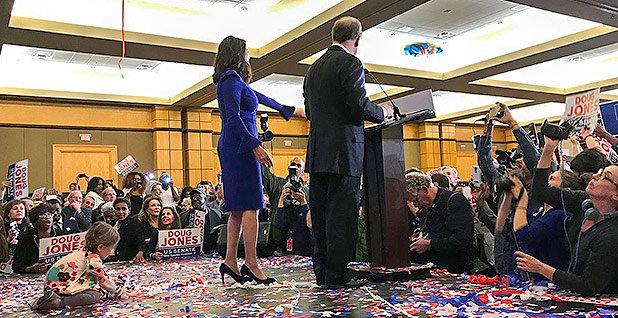 It’s hard to overstate the significance of this race. The result can be read as a rejection of President Trump; a sign of an impending Democratic wave election in 2018; and a condemnation of Moore, who was accused of molesting and assaulting teenage girls in the 1970s.

"Alabama has been at a crossroads. We have been at crossroads in the past, and unfortunately we have usually taken the wrong fork. Tonight, ladies and gentlemen, you took the right road," Jones told an uproarious crowd at his victory party.

Jones, the attorney who prosecuted the 1963 white supremacist bombing of the 16th Street Baptist Church, had to contend with a deeply conservative state and an uncertain demographic outlook.

Initial polls suggest significant turnout by African-Americans, who constituted about a third of votes cast and overwhelmingly voted for the Democrat.

Jones won by enormous margins in high-population centers like Birmingham and Huntsville, while rallying just enough support from suburban Republicans repelled by the allegations against Moore.

He also benefited from the public statements of his soon-to-be fellow Alabama Sen. Richard Shelby, a well-respected voice in the state, who wrote in a Republican other than Jones. In fact, write-in voting appears to have made a significant difference.

The Jones win will reduce the GOP majority in the Senate to a single seat. With an already splintering caucus, the party’s sought-after legislative achievements are in even more danger. And Democrats have a narrow but realistic shot at flipping the chamber blue next year.

The GOP gave itself a deadline to pass tax reform before the end of the current session. It also is crafting spending legislation. And observers are wondering how last night’s results will affect the calculus.

Establishment Republicans were quick to pin the loss on former presidential adviser Steve Bannon, who championed Moore and gave him favorable coverage through the conservative news site he helps run, Breitbart.

"Not only did Steve Bannon cost us a critical Senate seat in one of the most Republican states in the country, but he also dragged the President of the United States into his fiasco," read a statement from the Senate Leadership Fund, a political action committee tied to McConnell.

"Tonight’s results are clear — the people of Alabama deemed Roy Moore unfit to serve in the U.S. Senate," Gardner said in a statement. "I hope Senator-elect Doug Jones will do the right thing and truly represent Alabama by choosing to vote with the Senate Republican Majority."

"The people of Alabama have chosen a senator who will stand up for our shared conservation values," said Conservation Alabama Executive Director Tammy Herrington. "We look forward to working with Doug Jones to protect our state’s lands and water and the people and communities that rely on them."

In all, the League of Conservation Voters spent more than $300,000 backing Jones, including through $250,000 in donations to the Highway 31 PAC.

Jones touted environmental issues during the race and criticized Trump for his decision to leave the Paris climate agreement.

"I want to be perfectly clear: I believe in science," Jones said on his campaign page. "The consequences of our unchecked use of fossil fuels for our planet and our health have been clear for decades. Period. Clean air and clean water are not controversial."

Jones was careful to stress his support for coal, an economic and political power in Alabama, which was once a steel-producing hub. The grandson of a coal miner, Jones advocates for retraining programs to support miners unable to find work in the declining industry.

Strange’s departure will cause a reshuffle in the Energy and Natural Resources Committee and Agriculture, Nutrition and Forestry Committee, as well as the high-profile Armed Services Committee. Outgoing Sen. Al Franken (D-Minn.) also sits on Energy. It’s unclear whether the new balance of power will affect committee ratios.

Republicans may be weakened, but many are quietly pleased to avoid having to deal with Moore in the Senate. In the days before the election, party leaders suggest Moore would face an ethics investigation were he to win, while others like Gardner wanted to expel him.

Arizona Sen. Jeff Flake (R), who donated to Jones’ campaign with the note "country over party," tweeted that "Decency wins," while New Hampshire Democratic Sen. Maggie Hassan summed up the feelings of Democrats nationwide in one short tweet: "Hot damn."

The president, who ignored members of his party and went all in for Moore, tweeted: "The people of Alabama are great, and the Republicans will have another shot at this seat in a very short period of time. It never ends!"