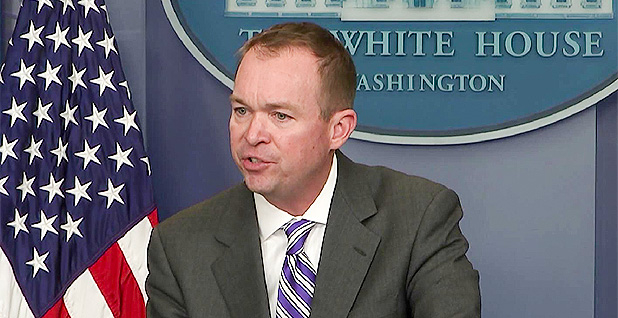 Mick Mulvaney jokes that his hectic schedule since he took over as Office of Budget and Management director three months ago has cost him 12 pounds. But that’s nothing compared with the diet he hopes to put federal agencies on as he rolls out the Trump administration’s first budget today.

The former four-term South Carolina lawmaker is the unquestioned point man on a budget that would cut 2 cents for every dollar spent on discretionary domestic programs over the next 10 years (Greenwire, May 22).

Those reductions would total $54 billion in fiscal 2018 alone, taking a hatchet to energy and environment programs at U.S. EPA and the Energy and Interior departments to boost Pentagon accounts and leave Social Security untouched.

Mulvaney will appear before the House and Senate budget committees tomorrow and Thursday respectively to defend what amounts to be the largest proposed cuts in domestic programs since Ronald Reagan was president.

"I can’t remember the last time we looked at a budget through the eyes of people who were paying for it," Mulvaney said yesterday, previewing his likely testimony for reporters that argues the budget puts "taxpayers first" by rooting out inefficient federal programs.

White House budget chiefs have a long history as punching bags for lawmakers eager to fight cuts to popular programs or warn that not enough red ink is being erased. But Mulvaney seems likely to catch more fire than most given emerging bipartisan opposition to the cuts he took the lead in writing and his reputation as conservative rabble-rouser during his time in the House.

Sen. Lindsey Graham (R-S.C.), a senior appropriator, concedes Mulvaney has one of the tougher jobs in Washington.

"The budget is dead, OK? We’re not going to enact the president’s budget, but it’s Mick Mulvaney’s job to sell the budget and be a loyal soldier and try to listen to Congress," he said.

Appropriators and lawmakers from both parties have taken to calling Trump’s first spending request the "Mulvaney budget." Many believe their former colleague has shaped the budget with only the broadest of input from Trump, who has shown little interest in the nuances of federal spending.

"I doubt if the president had a lot of input into it. As a matter of fact, Mick basically admitted when he put the budget together he was interpreting the president’s campaign promises and putting them into the budget," said Rep. John Yarmuth (D-Ky.), the ranking member on the House Budget Committee.

Rep. Mike Simpson (R-Idaho), a senior appropriator, said he believes Trump told Mulvaney to find $54 billion in cuts to pay for more military spending and then he did so by turning to well-worn, conservative ideas from groups like the Heritage Foundation, including cuts to conservation and social safety net programs.

Many of the cuts, including those to energy science programs, "do not make sense," said Simpson, adding the budget won’t pass the House without a rewrite.

Mulvaney does not dispute that he had leeway in deciding the cuts needed to balance the budget. He recalled yesterday that the only resistance to reductions he got from Trump was on proposals for scaling back Social Security and Medicare — ideas eventually dropped from the budget.

Long-term budget watchers note Trump will be abroad when the fiscal plan comes out rather than making carefully stage-managed appearances around the nation that past presidents have used to promote their policies. They say that too raises the stakes for Mulvaney’s appearances on Capitol Hill this week.

Still, appropriators from both parties have said little has changed since the initial version of cuts came out in a "skinny budget" in March.

More than 10 budget and appropriations lawmakers interviewed for this article say the plan remains dead on arrival. Even GOP critics of EPA in Congress say calls for cutting the agency’s budget by a third won’t stand and are, at best, a negotiating plan.

Mulvaney will also play a larger role than usual in promoting the budget because many senior positions remain unfilled in the administration. Some members of Congress say they are more interested in the fiscal 2019 budget due next spring, which they see as reflecting the broader views of the Cabinet and agency heads, than the one coming out today.

Sen. Lisa Murkowski (R-Alaska), who chairs the Interior-Environment Appropriations Subcommittee, lamented the lack of political appointees at the various Interior Department offices, many of whom traditionally have appeared separately before committees to defend their budgets.

"I think it is problematic, particularly because there’s a lot of discussion about how efficiencies can be had within the respective agencies," she said last week. "And it would be really helpful to have an opportunity to speak to these new heads of agencies ahead of time. But it doesn’t look like we’re getting any of them anytime soon."

A state legislator who worked for his family’s homebuilding business after law school, Mulvaney, 49, came to Congress in the 2010 tea party wave by ousting one of the Democrats’ most respected voices on fiscal issues — then-House Budget Chairman John Spratt (D-S.C.).

Leadership quickly gave Mulvaney a spot on the Budget Committee, where he pressed for deeper spending cuts than many in his own party would back. He regularly argued that entitlement programs needed to be scaled back to cut the ballooning federal debt.

Mulvaney also helped found the Freedom Caucus, a rump group of younger House lawmakers who felt the party was not conservative enough, and pushed to oust then-Speaker John Boehner (R-Ohio.). He used the term "Shutdown Caucus" for conservatives like himself who were willing to close the government rather than negotiate over spending with President Obama or raise the federal debt ceiling.

While Mulvaney’s hard-line views appealed to Trump, they threatened his nomination. He only was narrowly confirmed, 51-49, by the Senate with no Democratic support.

Rep. Marcy Kaptur (D-Ohio), the ranking member on the House Energy and Water Appropriations Committee, derisively calls Mulvaney a "meat grinder" for his willingness to take an ax to budget programs. She said he promotes fiscal purity by cutting social programs that help the needy.

"He’ll get his head handed to him on a platter, and I welcome that opportunity," Kaptur said of the upcoming budget hearings.

But his former Republican colleagues say Mulvaney is not as inflexible as portrayed, noting he has dropped past opposition to increasing defense spending. They also say that while he took tough stances, he was well-liked by most Republicans in the House and has been a valuable liaison for the administration on Capitol Hill, including helping to negotiate a recent deal on health care legislation.

Earlier this month, Mulvaney’s harder edge was on display as he refused to dismiss Trump’s call for forcing a government shutdown this fall if Democrats won’t support his spending priorities — even as party leaders panned it.

But the budget chief sounded a more conciliatory note with reporters yesterday. He said, "Do I expect [Congress] to adopt this 100 percent, wholeheartedly, without any change? Absolutely not."