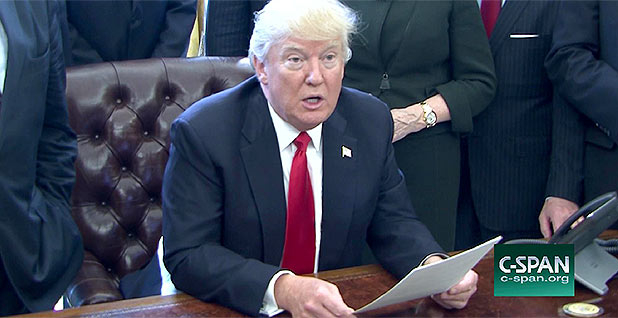 Business leaders joined President Trump at the Oval Office for an executive order on regulations earlier this year. C-SPAN

At EPA, which has been at the forefront of Trump’s efforts to slash regulations, there have been no details about rules being put on the chopping block and what shareholders are being consulted even though the president’s order required the task force to submit a progress report to Administrator Scott Pruitt by May 25 and "on a schedule determined by the agency head thereafter."

No such report has been made public.

The names of task force members were identified in a memo in March, with attorney Samantha Dravis, a Pruitt adviser, leading the panel as regulatory reform officer. Dravis is a former top official at the Republican Attorneys General Association.

"Given the Republican Attorney Generals Association was a leading force to try to thwart efforts to clean up the air and water, I’d say there’s plenty of reason to be concerned," said Frank O’Donnell, president of Clean Air Watch. "You know people by the company they keep. And [Dravis] has certainly kept company that hasn’t often been friendly toward aggressive environmental protection."

Inhofe is one of Congress’ most vocal critics of EPA and climate science. He’s called the idea that man-made emissions are causing climate change "the greatest hoax ever perpetrated on the American people" (E&E Daily, Nov. 3, 2014).

"I don’t know that he has ever backed away from his comment that global warming was the greatest hoax ever perpetrated," O’Donnell said. "I would say that his former staffers are bringing a bias … against strong enforcement and strong environmental and health protections."

An EPA spokesman said all task force members adhere to guidelines on ethics and conflicts of interest.

"All agency officials will comply with their ethics requirements, the members of the regulatory reform task force are no exception," the spokesman said in an email.

The spokesman redirected other questions about the task force to EPA’s regulatory reform webpage.

Freedom of Information Act requests provide one way for reporters and environmental groups to glean information about EPA’s task force. E&E News has submitted multiple FOIA requests for relevant communications among the task force members. Those requests are pending.

Larry Auther of EPA’s Office of Policy said in an email today to E&E News: "The Agency is currently working through a large volume of backlogged FOIA requests."

A previous FOIA request for Pruitt’s calendar from February through May, which was obtained by the liberal-leaning watchdog group American Oversight under FOIA litigation, shows that task force members have consulted with industry on regulatory reform, though not necessarily in connection with the panel.

On March 21, Dravis was listed as attending a meeting with Chevron Corp. executives "to discuss regulatory reform in our sector and to share Chevron’s perspective on global oil and gas developments."

Chevron spent more than $3 million in the first quarter of fiscal 2017 on lobbying, including on issues relevant to EPA such as the renewable fuel standard, according to disclosure forms released by the Senate.

On March 29, task force member Brown was listed as attending a meeting with senior officers at the National Association of Home Builders. The topics included "overall regulatory reform" and the Waters of the U.S. rule.

And on May 4, Jackson was listed as attending a meeting with members of the Southern Crop Production Association. One topic was "regulatory reform at the intersection of pesticide policy and the Endangered Species Act."

John Walke, director of the climate and clean air program at the Natural Resources Defense Council, said he hasn’t heard anything about EPA’s task force since its inception. But he wasn’t surprised to learn its members have met with industry groups.

"The senior ranks of this Trump EPA are filled with former industry lobbyists and staff for the senator with one of the lowest lifetime scores by the League of Conservation Voters in its history," Walke said, referring to Inhofe.

"So it would come as no surprise that they are speaking exclusively with industry and committed exclusively to an industry agenda at the expense of ordinary Americans and the environment," he said.

NRDC filed its own FOIA request for information about the task force in July, Walke said. The request seeks the task force members’ communications on which regulations to target for repeal, among other records.

The request is probably "sitting in a pile along with hundreds of others," Walke said.

The regulatory panels’ secrecy will likely be the focus of two House Oversight and Government Reform subcommittees at a hearing tomorrow.

The hearing is described on the committee’s website as a "check-in" on the panels.

In August, top House Democrats sent a letter to the White House criticizing the panels for lacking transparency in their efforts to cut rules (Greenwire, Aug. 7).

Rep. Gerry Connolly (D-Va.), another one of the letter’s signatories and ranking member on the Oversight and Government Reform Subcommittee on Government Operations, said the panels reflect broader problems within the Trump administration.

"The rampant failure of senior administration officials to disclose obvious conflicts has created a cloud of mistrust that hangs over the Trump administration," Connolly said in an emailed statement to E&E News.