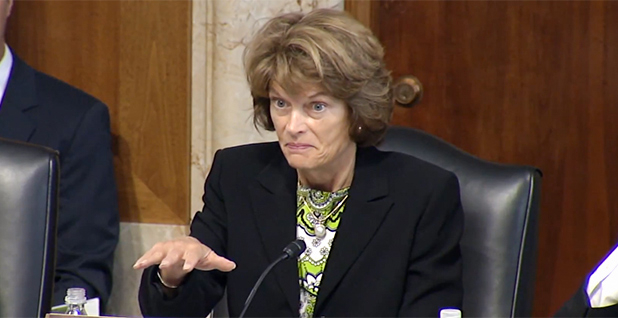 A key Republican senator is questioning the rationale cited by the Trump administration as it looks to prop up struggling coal and nuclear plants.

Energy and Natural Resources Chairwoman Lisa Murkowski (R-Alaska) told E&E News yesterday that though she hasn’t finished digesting the 40-page leaked document under consideration by the White House, she isn’t sold on the notion that the action is needed on national security grounds.

"I have been one that has said I didn’t think the national security argument that this really merited that situation," she said.

"I have maintained that the issue of reliability is one that we need to aggressively assure that we’re not going to leave any portion of this country vulnerable. But I’ve always felt that this is something that the FERC should be looking to," she said. "We haven’t see as much action out of them as I would have liked."

Murkowski added that she has "a great deal of hesitation about this as an approach."

"So I’m going to do my due diligence and look at their rationale for it, but this is not the direction that I would have first moved toward," she said.

Under the plan, the government would use emergency powers to prevent the closures of coal and nuclear plants on national security grounds (Greenwire, June 1).

But Murkowski said the plan sounds like "just another example of picking the winners and losers."

"Competition has gotten us to a pretty good place with our markets, quite honestly," she said. "And now we’re basically going to be directing a few, specific industries from within. I’m just not convinced that’s the right way to go."

Several other GOP lawmakers yesterday said they were either unfamiliar with or still digesting the plan.

Sen. John Hoeven (R-N.D.) said he supports the goal of maintaining baseload generation but was unfamiliar with the details of what the administration is considering.

"We want to figure out something that makes sense, and I always favor market-based solutions but remember right now under the law and regulation some of the baseload guys — even though they built the transmission — they take a back seat when it comes to accessing the grid," he said. "So that’s the challenge."

Senate Energy and Natural Resources Committee member Bill Cassidy (R-La.) said he would keep an "open mind" on the plan.

"I haven’t reviewed it, but I gather it is more of a security issue than anything," he said yesterday. "They want to have at least some energy production that is based upon stockpile as opposed to just-in-time delivery. I have to kind of think about that and look at that and see how valid that is."

But he rejected the notion that the proposal is tantamount to picking winners and losers.

"Remember [during] World War II, if it was something for the war effort, they would have a stockpile of it," he said. "We have gotten away from that with just-in-time delivery, but that’s in the private sector. This would kind of harken back to: For national security purposes we’ll have a little bit of inefficiency in the market to make sure that if a bad thing happens, we are prepared."

Sen. Lindsey Graham (R-S.C.) was sympathetic to the reliability argument.

"I think it makes sense in this regard: Renewables cannot make up for the loss of coal and nuclear generation. The grid would fail," he told reporters. "So I think what he is saying is trying to reverse the stigma that Obama created for coal particularly. It makes sense."

He also dismissed concerns about market interference. "I think [the Obama administration] picked coal to be a loser, and he is trying to reverse that," Graham said of President Trump.

But Sen. Maria Cantwell (D-Wash.), the ranking member on the Energy and Natural Resources Committee, slammed the plan as a "bad idea."

"We don’t want to make electricity more expensive than it needs to be," she told reporters. Cantwell also dismissed administration arguments that cyberthreats justify the plan.

"I don’t think this is the issue for that," she said. "They need to get at the real technical side of cybersecurity and get a cohesive focus within the administration on both risk and investment."