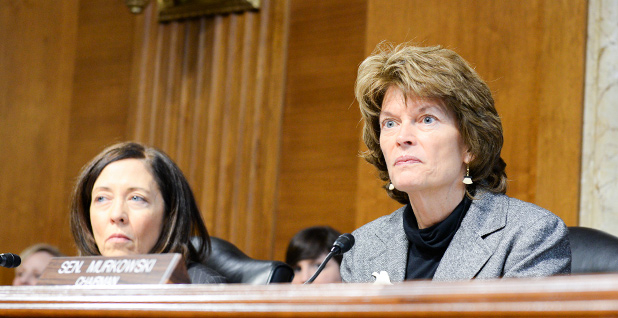 Having finally secured a long-sought victory on the Arctic National Wildlife Refuge, Senate Energy and Natural Resources Chairwoman Lisa Murkowski (R-Alaska) is looking to the new year to advance another stalled legislative priority: the bipartisan energy package that languished in the last Congress after clearing the Senate by a wide margin.

The energy bill, S. 1460, largely mirrors the measure that passed the Senate last year 85-12 but died in conference talks during the closing weeks of the 114th Congress.

It has been in a holding pattern for months since Majority Leader Mitch McConnell (R-Ky.) placed it on the Senate calendar, a move that allows him to bring it up anytime (E&E Daily, July 25).

With health care on hold and tax reform now behind the GOP-led Congress, Murkowski said she’s working to convince McConnell the energy bill is an easy bipartisan win to kick off the new year.

"My hope is that we’ll be able to see this take off in January," she said, arguing the proposal may help sooth tensions from the partisanship of recent months.

"I think it will be important for this Senate, actually this Congress, to begin the new year with some initiatives that are going to bring us together rather than drive further wedges."

Still, it remains an open question whether Murkowski and ENR ranking member Maria Cantwell (D-Wash.) can get the bill across the finish line this Congress.

Last year, months of conference talks ended up with House negotiators walking away from the table in December, in part driven by the knowledge they’d have a Republican president in the new year.

The House was never particularly enthused by the Senate bill, which addressed energy supply and infrastructure, would have sped up liquefied natural gas exports, and would have permanently authorized the Land and Water Conservation Fund.

Rep. Joe Barton (R-Texas), vice chairman of the Energy and Commerce Committee, said yesterday he could support a comprehensive energy bill but said it may be a heavy lift.

"The House was successful on health care, we’ve just been successful on a big tax bill, I’m not sure we have the stomach in an election year to tackle a big energy bill," he said, adding that it was "not impossible, but it would be difficult to do."

Barton, who as former Energy and Commerce chairman shepherded the 2005 energy bill into law in a GOP-led Congress and White House, said there may be less impetus to legislate on energy in part because of that effort.

"The energy markets are in a lot better shape right now," he said. "Our basic energy policy is better because of the 2005 deal."

Last year, rather than make deals with the Senate and a lame-duck Democratic president, House Republicans felt they could promote a more aggressive energy legislative agenda.

For instance, the LNG provisions in the Senate bill would simply add a shot clock to force the Energy Department to make decisions on export applications.

Already this year, Republicans in both chambers have offered bills that would go much further in removing federal oversight of the export process.

Sen. John Barrasso (R-Wyo.), a senior member of Murkowski’s panel who has pushed LNG exports hard in recent years, noted yesterday that the purpose of the Senate’s provisions "was to get answers on getting these permits to be able to export more" from an administration that critics say was overly cautious on exports.

Trump’s "focus on energy dominance is in my mind the right way to go, that the sort of delays that we were experiencing for which we needed to force legislation, we haven’t had," Barrasso said.

Still, the Wyoming Republican said he supports bringing back the Senate package. "We still need to do more," said Barrasso.

Murkowski said yesterday she understands the desire by some Republicans to go further than what was agreed to in the 114th Congress, but said she remains committed to agreements she made with Cantwell.

"If we try to perhaps build it out to be more aggressive in ways that might make Lisa Murkowski a little happier but make Maria Cantwell a little less inclined to help advance it, I’m sensitive to that," she said.

Murkowski said she’s had discussions about possible additions to the bill that would help jump-start its prospects in the new year, including possibly including a wildfire funding fix that is desperately sought by Western lawmakers from both parties.

Such a fix was one area that conferees made major progress on last year, but the agreement came too late to resuscitate the House’s flagging interest in talks.

The ongoing rash of especially brutal wildfires could help propel the issue to the forefront in the coming weeks, aiding the energy bill in the process, Murkowski said.

"I’m told that it’s about a $2.5 billion charge to the firefighting account this year, it’s about $800 million more than any previous year — staggering," she said. "And it’s going to keep getting worse."

Additionally, Murkowski said there’s discussion about adding a package of more than 60 noncontroversial public lands bills to the mix, which she said could help solidify support of individual members.

Those measures "don’t mean anything to 49 other states, but to those folks in one state, it’s really significant."

Rep. John Shimkus (R-Ill.), an energy conferee last year and the current chairman of the Energy and Commerce Subcommittee on Environment, said yesterday the upcoming infrastructure bill could carry energy transmission and grid improvements, as well as legislation he authored to reauthorize the brownfields hazardous waste cleanup program, a drinking water infrastructure bill and even his nuclear waste overhaul.

"They could all be infrastructure," he said.

Murkowski acknowledged desire to legislate on infrastructure but said lawmakers shouldn’t wait for that bill if the opportunity to act on the Senate energy bill should arise.

"Why don’t we start with energy infrastructure because we’ve got the bill already written?" she asked. "Let’s just go."