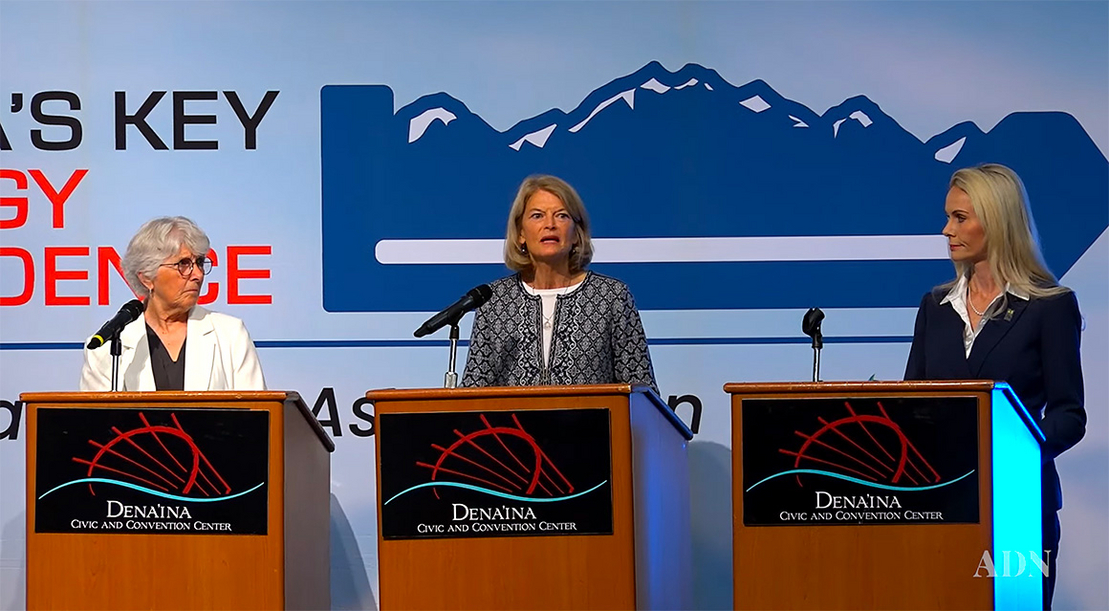 Republican Alaska Sen. Lisa Murkowski took significant flak from her Republican election opponent yesterday over how she is handling the Biden administration’s approach to oil and natural gas.

Kelly Tshibaka, who is seeking to unseat Murkowski this fall, criticized Murkowski’s vote to confirm Interior Secretary Deb Haaland. She pointed to the administration’s efforts to block drilling in the Arctic National Wildlife Refuge and its review of the Willow Project, a proposed oil and gas development from ConocoPhillips.

“I don’t think this vote was in the interest of Alaska,” Tshibaka said at a candidate forum hosted by the Alaska Oil and Gas Association. She pointed to Haaland’s actions thwarting drilling in the National Petroleum Reserve-Alaska and in the Cook Inlet. “She’s shown that she cannot be trusted.”

She also blamed Haaland for delays in an effort to build a road through the Izembek National Wildlife Refuge, allowing residents of tiny King Cove access to an airport. The Department of Justice has said the effort should proceed amid a legal fight over it (Greenwire, Aug. 8).

Haaland could make a determination, but has chosen not to take action or comment publicly. Tshibaka also bemoaned the suspension of a controversial road to a mining district (Greenwire, Feb. 23).

“We should have gotten something else out of that deal,” Tshibaka said of Haaland’s confirmation, which Sen. Dan Sullivan (R-Alaska) also voted for, and which then-Rep. Don Young (R-Alaska) supported. “And our delegation could have done something better.”

Murkowski, who used to chair the Energy and Natural Resources Committee and remains a senior member, defended her record and said what she’s done has helped the state. Haaland would have been confirmed with or without her vote, Murkowski argued.

“The question is, what kind of relationship do you want to have with the secretary of the Interior, who is effectively our landlord,” she said. “For purposes of trying to be able to advance, finally, after so many years, a small connector road to King Cove, we’ve got to be able to talk to the secretary. Like it or not, it’s her department that has the oversight of what we’re going to do with Willow,” she continued.

“You’ve got to have the ability to speak to somebody there in the department.”

Tshibaka, the former commissioner of Alaska’s Department of Administration, went on to criticize how Murkowski has handled her seniority in the Senate.

“Seniority could be used to block appropriations, to make agencies hold their feet to the fire for holding to permit rules and area plans and lease sales — we haven’t done that,” she said.

“It could be used to block nominees or oppose nominees to trade things for Alaska. It could be used to keep ANWR open after we got ANWR … It can be used for relationships on all sides in order to get things done for Alaska, not get things done for D.C. insiders,” she continued, accusing Murkowski of carrying out a “vendetta” against Trump. “Seniority doesn’t help when you squander it.”

Tshibaka said it is the job of Alaska’s congressional delegation “to not play on Team Biden, but to be a good goalie.”

Tshibaka went on to call for the Senate to “open up the personnel files” of Interior Department employees who worked on the environmental review for ANWR drilling and to investigate the department’s handling of the Willow Project if it is rejected.

The two candidates found agreement on major energy policy questions, including that Alaska should produce more oil and gas and that federal permitting needs to be changed to be more favorable to projects.

Tshibaka has the support of former President Donald Trump and the Alaska Republican Party in her bid to unseat Murkowski. The incumbent senator’s clashes with Trump, including voting to convict him for last year’s impeachment, have led Trump and his allies to work for her ouster.

Thanks to Alaska’s new ranked-choice voting system, neither Republican was eliminated in last month’s primary. Instead, the top four finishers from the nonpartisan primary — Murkowski, Tshibaka, Democrat Patricia Chesbro and Republican Buzz Kelley — will appear on the November ballot, and voters will rank them. Chesbro attended the forum. Kelley was invited but didn’t show.

In addition to the Biden administration criticisms, the two Republicans clashed over last year’s bipartisan infrastructure law, which Murkowski voted for.

Tshibaka argued that Alaska gets only a smaller sliver of the law’s funding, and said it was fueling inflation.

“It’s like the government’s handing us $100, and we’re having to fight like hell over 50 cents,” she said. “We got a raw deal out of that, and we should have done a lot better. All it did was push through Biden’s climate change agenda.”