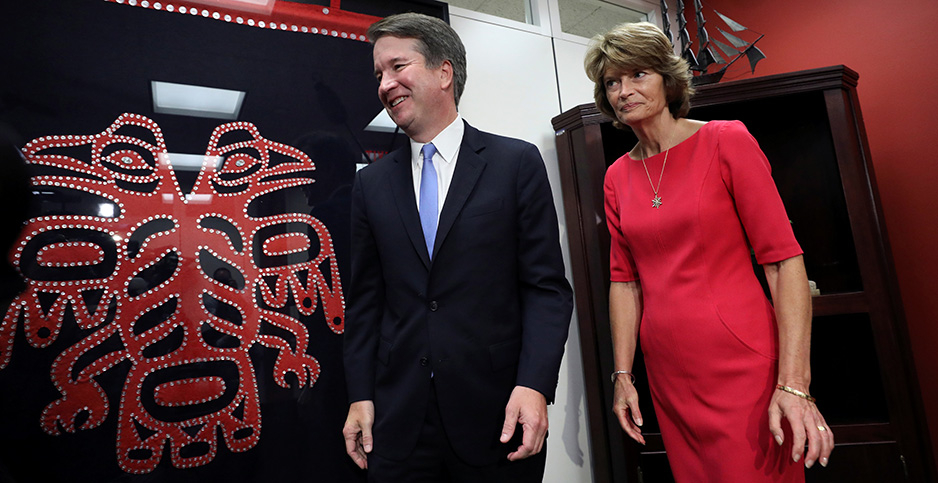 Sens. Lisa Murkowski (R-Alaska) and Joe Manchin (D-W.Va.) this morning bucked their parties’ leadership on the nomination of Brett Kavanaugh to the Supreme Court

The Senate voted to advance the appeals court judge this morning, setting a final roll call for tomorrow, but leaders now face questions over whether they can muster the 50 votes necessary for confirmation.

Murkowski responded with a barely audible "no" this morning when the clerk called her name during the vote on whether to invoke cloture — or end debate — on Kavanaugh’s nomination.

Although senators for a variety of reasons may choose to vote differently on final passage than they did on a procedural vote, Murkowski’s decision to oppose ending debate sent a clear signal that she has serious qualms over confirming Kavanaugh.

Maine Sen. Susan Collins, a GOP moderate who is close to Murkowski, voted to end debate but told reporters she will announce her final decision this afternoon during a 3 p.m. Senate floor speech.

Similarly, Manchin could end up voting against confirming Kavanaugh, despite supporting the move to end debate.

Some Democrats were holding out hope that Collins, Manchin or Sen. Jeff Flake (R-Ariz.) would flip their vote in the final tally, much like the late Sen. John McCain (R-Ariz.) did last year when he voted down the Republican repeal of the Affordable Care Act.

"You could interpret it that 51 people want the process to go ahead, but when the actual vote comes, one or two might not vote yes," Judiciary Committee ranking member Dianne Feinstein (D-Calif.) said after the vote.

Sen. Tim Kaine (D-Va.) said his side would keep trying to get enough votes to defeat Kavanaugh, adding that he had a long conversation with Manchin on the way up to the vote.

However, after this morning’s procedural vote, Flake signaled to reporters he was likely going to vote to confirm Kavanaugh.

‘A flurry of whispers’

A flurry of whispers erupted among reporters after Murkowski rose slowly to quietly cast her vote. Some reporters rushed out of the gallery after the Alaska Republican spoke.

Murkowski sits next to Collins in the Senate chamber, and the two chatted before and after the vote, smiling often. They ended up going in different directions, at least for now.

The weight of the moment was evident as most senators remained seated and silent when the clerk ticked off their names during the roll call. Gallery guests also were subdued. There were no outbursts of any kind.

Delaware Sen. Tom Carper, the top Democrat on the Environment and Public Works Committee, was the last recorded vote, entering the chamber around about 20 minutes after the roll call started. "I vote no," he said into his microphone.

Murkowski, unlike other senators in the undecided camp, hung out for some time on the floor, talking to Senate Majority Whip John Cornyn (R-Texas), Ohio Republican Sen. Rob Portman and some Democrats, including Minnesota Sens. Amy Klobuchar and Tina Smith.

Klobuchar had a tense exchange with Kavanaugh during last week’s hearing when she asked him if he’d ever blacked out from drinking, and he retorted, "Have you?"

Sen. Maria Cantwell (D-Wash.) quietly slipped what looked like a piece of paper to Murkowski post-vote and then walked away. Cantwell is the ranking member on Energy and Natural Resources, the committee Murkowski leads.

Sen. Cory Booker (D-N.J.) spoke to reporters in the Senate basement after today’s vote and said he didn’t want to speculate about tomorrow. "We saw what happens at the last minute," Booker said, referencing McCain’s move.

Sen. John Thune (R-S.D.) told reporters this morning that final action will happen tomorrow despite a scheduling conflict with Republican Sen. Steve Daines, who will be back home in Montana to attend his daughter’s wedding.

"Whatever happens, we’ll try and work around that," Thune said. "I mean, obviously his daughter’s wedding is a pretty big deal."

Senate Majority Leader Mitch McConnell (R-Ky.) could leave the vote open until Daines can return to Capitol Hill, though it wouldn’t be necessary if no votes change between the procedural vote and the final tally. Vice President Mike Pence would be on hand to break a tie.