Murkowski scores $230M in earmarks ahead of tough campaign 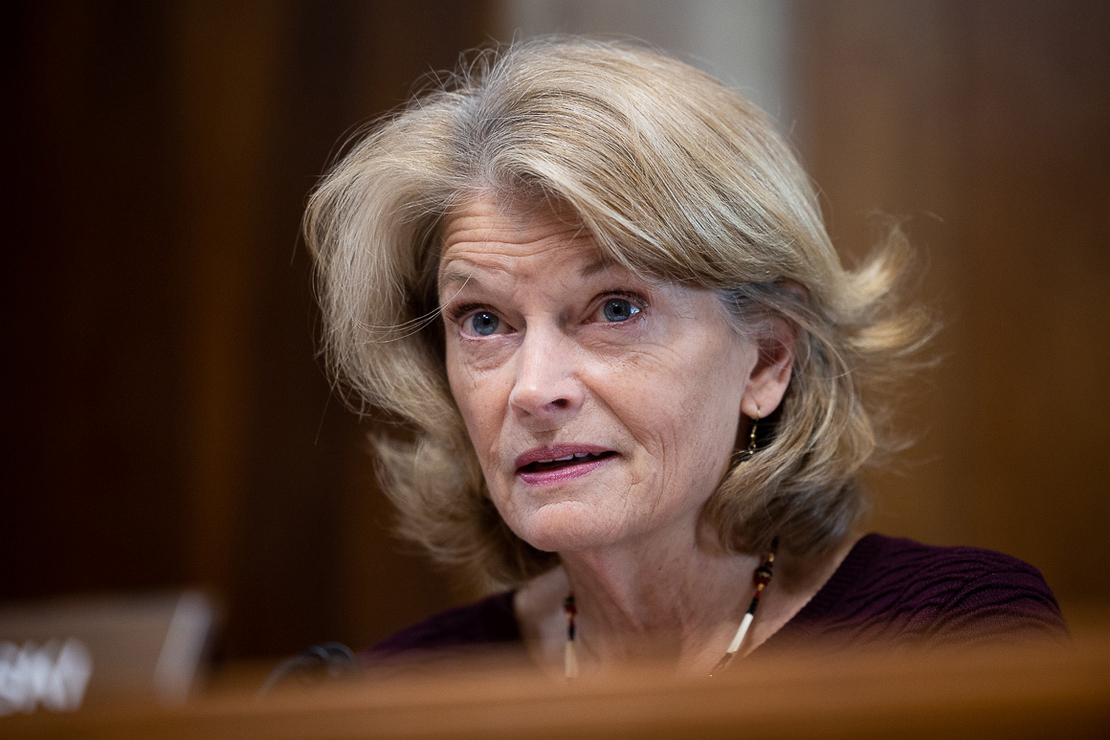 Alaska Sen. Lisa Murkowski was one of many Republicans who took advantage of the return of earmarks during this year's spending process. Francis Chung/E&E News

Republican Sen. Lisa Murkowski of Alaska secured $230 million in earmarks in the omnibus spending package, much of which will benefit Native populations there — a potential boon for her in a competitive reelection campaign.

Murkowski, a senior member of the Appropriations Committee, pulled in the 11th-highest amount in total earmarks in the Senate, according to an analysis by E&E News. She bagged earmarks boosting energy production and water infrastructure and another that girds coastal communities against climate change.

But the largest pot of money — almost $28 million — goes to the construction of a roughly 10-mile access road from the remote city of Kotzebue to Cape Blossom, the site of a proposed seaport.

That money will come in handy. The three-term Republican is facing an election challenge from Kelly Tshibaka, a former Alaska Department of Administration commissioner endorsed by former President Trump. The primary is slated for this August and the general election for Nov. 8 (E&E Daily, June 21, 2021).

President Biden yesterday signed the $1.5 trillion spending package, which for the first time in over a decade included earmarks — directed spending requested by individual lawmakers (E&E News PM, March 15). There are new disclosure requirements and strict limits on who can receive them.

Murkowski’s campaign touted the earmark wins. In a statement, Nate Mast, a spokesperson, said the money was “a direct result of her listening to the needs of Alaskans — in rural communities, cities, and everywhere in between — and addressing their concerns with real-world, tangible solutions.”

Securing the earmarks could help Murkowski with Native populations in Alaska, who have backed her in the past. Alaska is home to the highest percentage of Native Americans and Alaska Natives in the country, according to Census Bureau data.

Those voters came through for her in 2010, when she lost the primary but later won reelection as a write-in candidate. Now, Murkowski is delivering for those Indigenous communities that have supported her.

Gerald McBeath, a University of Alaska, Fairbanks, emeritus professor of political science, noted that many Alaska Native tribes, especially those living in villages outside of Anchorage, Fairbanks and Juneau, are reliant on government transfers in areas where there are very few jobs with full-time salaries.

“This would bring additional wealth to the communities,” he said.

McBeath noted that water quality and the threat of climate change are unifying challenges throughout rural areas of Alaska — a point that Murkowski has hit on in the earmarks she secured.

In a press release touting the earmarks, Murkowski said the money advances EPA’s efforts to build and upgrade wastewater and drinking water systems in Native villages and rural Alaska, as well as provides help for communities facing coastal erosion.

Supplies of drinking water for Alaska Natives are “unsteady, uncertain and unsanitary,” McBeath said, and developing potable water is extremely important for villages.

McBeath added that there are 17 to 20 villages in Alaska “living on the edge” that may need to be relocated due to extreme weather and warming, primarily, and are facing serious water problems, costly fixes and remediation.

Murkowski, the former chair of the Energy and Natural Resources Committee and top Republican on the Appropriations Interior-Environment Subcommittee, secured earmarks for boosting renewables, a pilot program for an electric ferry and heat pumps in Alaska, and critical infrastructure for Native communities.

That package includes $2.5 million for a geothermal project in Unalaska, the main population center in Alaska’s Aleutian Islands, and $100,000 for a biomass reactor for Kivalina, a village that is trying to relocate due to encroaching sea-level rise (Climatewire, March 15).

But the project that received the most funds was a two-lane gravel road connecting Kotzebue, a transportation hub crucial for sending goods to communities in the Northwest Arctic Borough, to a beach access area near the coastal town of Cape Blossom.

The cost of living is high in Kotzebue compared with elsewhere in the state because inadequate transportation methods make it difficult to send goods up north, said Alex Johnson, Alaska senior program manager at the National Parks Conservation Association.

For years, locals have sought to build a road and port that would lower those costs. The road was fully permitted at the federal level, and construction began on the project in 2021.

However, funding remains an obstacle. While the road is expected to be completed in 2024, work is occurring in staged contracts and will only continue “as funding becomes available,” according to the Alaska Department of Transportation and Public Facilities.

Building a road in the Arctic is extremely expensive due to the “unique” considerations that go into construction work on tundra, Johnson said.

Johnson’s organization and other environmental advocacy nonprofits are currently waging campaigns against other roads being built in the Alaska tundra. Those roads, such as one project through the Ambler Mining District, would serve a commercial purpose and possibly damage fragile ecosystems.

When compared to the proposed road in the Ambler district, the road between Kotzebue and Cape Blossom will serve a “legitimately long-term community need for additional infrastructure,” Johnson said. “As far as roads go in that region, it appears to be a greater net positive than some of these other proposals.”

Murkowski’s earmarks speak to “the infrastructure needs that Indian Country has,” and Alaska Natives are “very keenly aware” of her achievements in Congress, said Chanda Meek, an associate professor at the University of Alaska, Fairbanks, and an expert on Indigenous-state relations.

“There’s a shortage of housing, a shortage of infrastructure, so it’s often difficult to get financial support for individual communities,” Meek said, noting that securing federal funding helps to foster “strong relationships” with Alaska Native communities and their respective nonprofit organizations.

“The Alaska Native leaders see her as responsive to their concerns,” she said.

Unlike the 2010 campaign, in which Murkowski lost the Republican primary to tea party favorite Joe Miller, Tshibaka won’t likely be able to eliminate Murkowski in the primary. Thanks to a system approved by Alaska voters in 2020, this year’s race will be an open primary, with the top four finishers advancing to the general election — a feat that the incumbent is nearly guaranteed to accomplish.

In the November general election, voters will pick candidates with a ranked-choice system, another change likely to benefit Murkowski.

Still, McBeath said that the Trump endorsement will loom large.

“That means something in Alaska, which has a very strong and energetic coterie of Trump supporters,” he said.

Meek, however, believes Alaska Native voters could help push Murkowski over the top to victory on a ranked-choice ballot. These voters typically vote Democratic, she said, but an affinity for Murkowski could act in concert with centrists to send her back to the Senate.

“I expect her to do better in the ranked choice than she might have done if our primary system was the same as it was last election cycle,” she said.